How did Zendaya’s fashion evolution become so prominent in Hollywood? Without a doubt, she is the most popular style icons for Gen Z. Let’s take a look at some of her statement looks. From her journey in Disney to the big step into Hollywood, she has paved her way through like a chameleon in making bold fashion statements. Why I called her a chameleon is because she has rocked distinct gowns, pantsuits, pretty much anything her stylists put her in. A unique look every time! Zendaya’s fashion evolution is something worth studying.

Red carpet seems to be her forte as she makes heads turn but so do her casuals. Let’s break down some of her looks, shall we? For the Kids’ Choice Awards, she wore a grey jumper with glittery collars and flared printed mini-skirt that gave tea- party vibes. She played up the look by adding dramatic cat-eye glasses and a pop of color with the hot-pink purse and brown strappy heels. 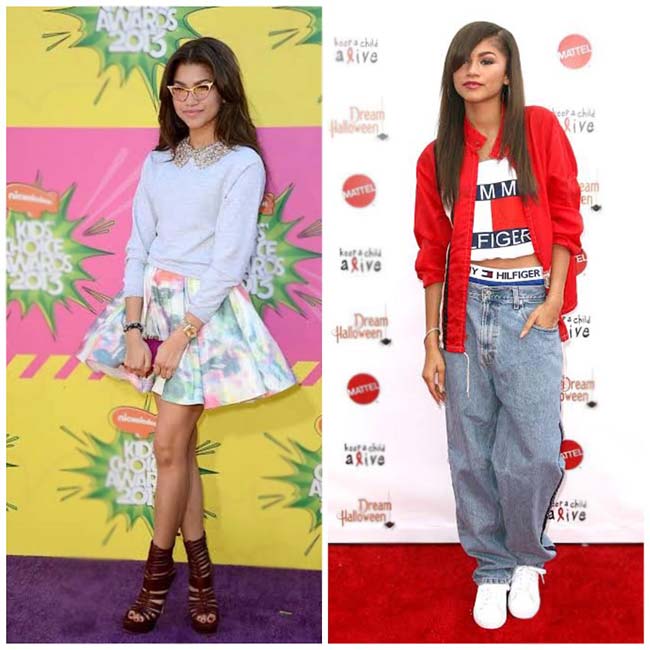 During her days at Disney itself, we got to see her variations in style, from girly-girl, Y2K layering, to tomboy Hilfiger. (See what I did there?) Zendaya’s fashion evolution has always been versatile. As a person that has always advocated diversity, it has reflected in her style as well.

The Euphoria star was seen wearing her pieces from Tommy x Zendaya collection on the streets looking like an eye candy.

She wore an oversized plaid off-shoulder shirt in vinyl, paired with a high-waisted orange and pink wrap-around skirt that added an abstract pop. The look was synchronized with simple pearl Louboutins and minimal jewelry. Absolutely glowing in dewy makeup, Z wore a baby-pink pantsuit with black detailing. She complemented the look with a black bodysuit and white heels systematically. She looked no less than a doll with that hairstyle, yet empowering in the suit.

We can’t talk about Zendaya’s fashion evolution without mentioning her pant-suit appearances. She rocks suits better than men, quite literally. There were talks when she wore the same suit as Michael B Jordan, and how she wore it better than him! She always goes ballistic with colors and patterns, she did no less with suits. The hot-pink suit is a bold choice, she pulled it off and how! Likewise, with velvet suits, oversized suits, she has done them all.

Zendaya seems to be very laid-back when it comes to casual days. She likes layering, no make-up, and natural hair, as is mostly seen on the streets with rumored boyfriends. 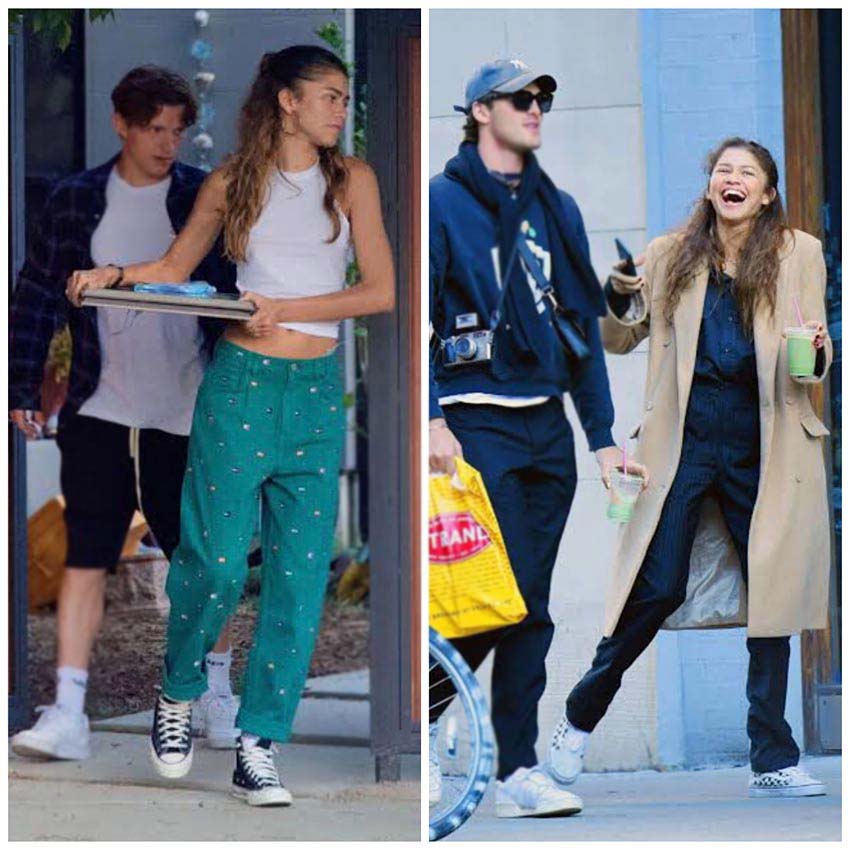 Seen chuckling around, she has kept her street style very comfortable yet dressy. Rest assured, Converse has always seemed to be her statement piece in this category, which we love!

She Slays in Couture

This emerald number is the classiest most elegant look according to me. For the 2019 Emmy’s red carpet, she donned this custom-made Vera Wang corset-slit silhouette gown that complemented her long, slender body so well. 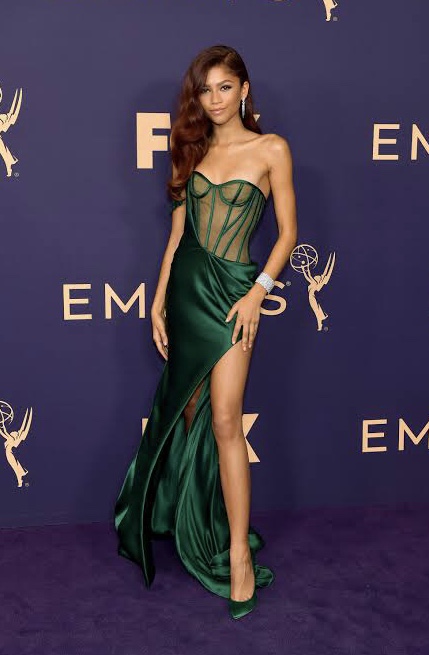 She wrapped up the look with matching heels and diamond jewelry, not to mention, the stunning burgundy waves. This ensemble definitely stood out in Zendaya’s fashion evolution. 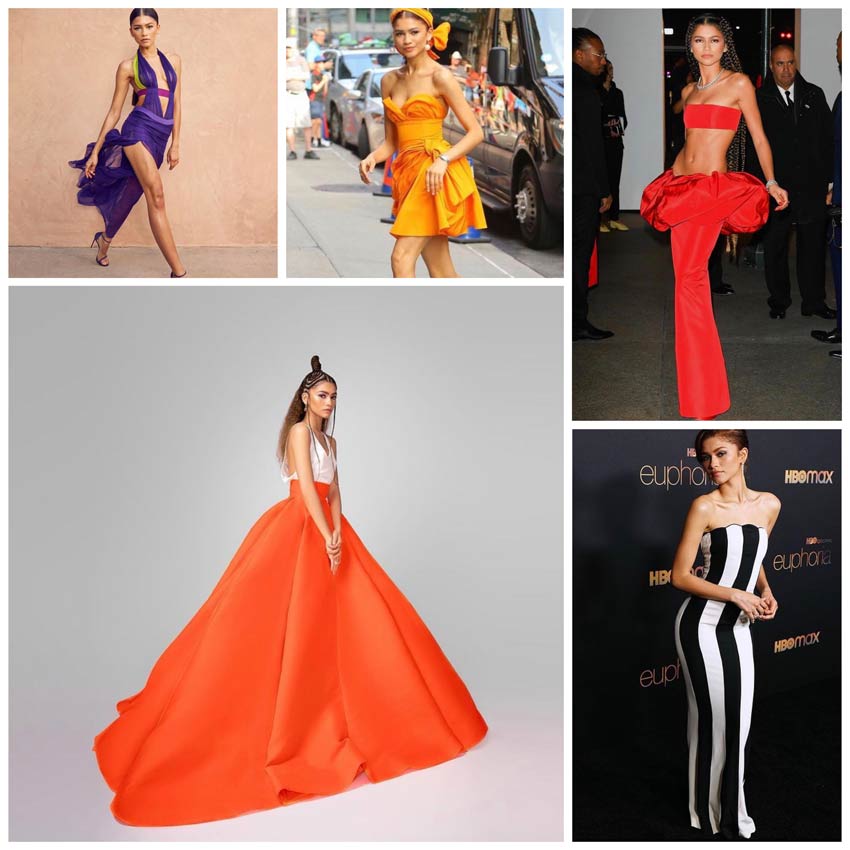 Zendaya is the queen of monochrome. She was seen wearing an elegant black and white vintage Valentino gown for Euphoria’s season 2 premiere. To collect her CDFA Fashion Icon award, she opted for a captivating red set by Vera Wang with puff detailing on the skirt. Can’t say for many but she sure has an eye for detail AND color!

The long-trusted stylist and confidant, Law Roach, has been by her side since day one in Hollywood. He has played a significant role in Zendaya’s fashion evolution, in other words, he is her fairy godmother (pun intended)! The 2019 Met Gala look was most talked about as the duo appeared as a whole fairytale. She straight-up dressed as Cinderella in a Tommy Hilfiger gown that needed a whopping twenty-meter carbon rods, forty-meter LED lights and five battery packets.

Roach was seen by her side, magically lighting the gown with a wand dressed as her fairy godmother, making everyone’s jaw drop. Now, this is called camp, innit?

Zendaya is one of the most solicited style icons right now. So magazine covers and endorsements are a piece of cake. Top magazines like Vogue, Elle, and Instyle have collaborated with her multiple times.

This year’s Elle and Vogue have a similarity in styling her with the white bows. Also evident is the versatility in all her cover looks. She has been the first choice of ambassador for leading luxury brands like Tommy Hilfiger and Valentino. Their collaboration outcomes are impressive. 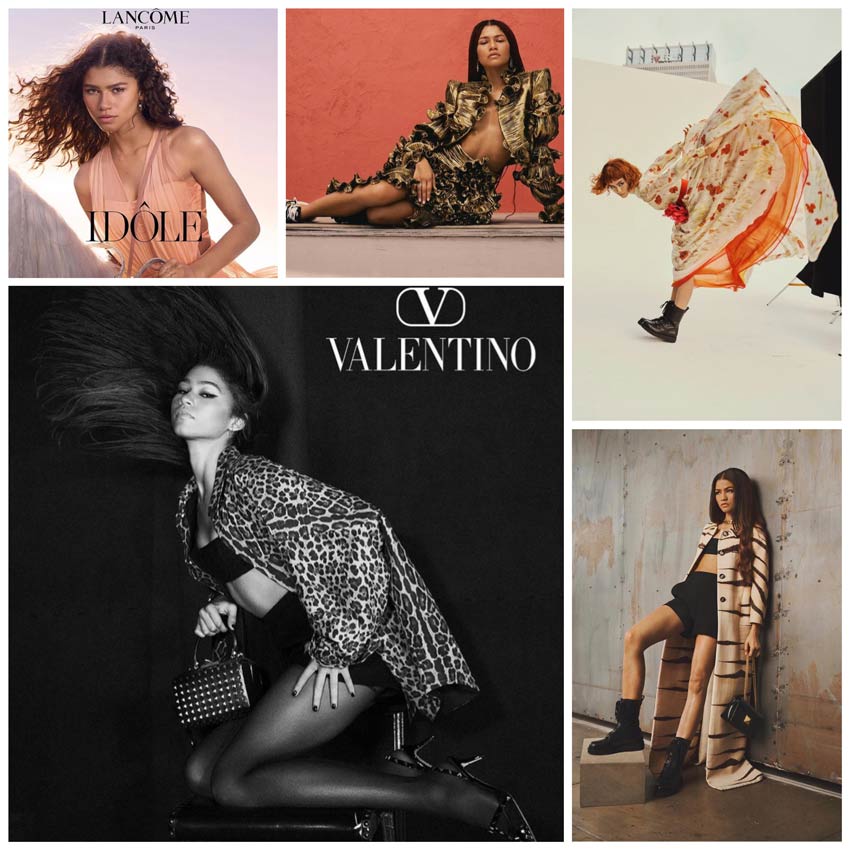 She also endorsed Lancomê this year, which was alluring with the pink sublime dress and the white horse prop. She is a fit for any theme, be it princess or goth, don’t you agree?

Rue, a teenage addict portrayed by Zendaya, had many shaken up. She was the youngest actor and second Black woman ever to win an Emmy for the best lead role.

Her appearance in the show was always careless and shabby accurately portraying a fathomless teen addict. She was mostly seen wearing oversized hoodies, sweatpants with bedhead, or a messy bun. Along with the oversized hoodies, she was seen wearing graphic tees and cycling shorts occasionally. Though the fits do seem very effortless, most of us would agree that they’re pretty hip, right?

With the wait and hype for this movie, it was a no-brainer that the promotions were going to be dreamy. Zendaya pulled off some of the most enchanting red-carpet looks.

She arrived at The Venice Film Festival in a nude leather floor-length Balmain gown with ruffles that looked like she was drenched. The gown had a hip-high slit that looked extremely sexy on her.

She wore an emerald Bulgari necklace, nude heels and finished off the look with flat-wet hair to compliment the dress. For Paris she made one of the best statements according to me. She wore a long-sleeved blouse with a high-waisted bodycon skirt that had a feather train from the knees. This oxblood ensemble was by Alaïa. What elevated the look for me was the afro and the subtle make-up, she looked like a queen from the ’60s!

Zendaya has made some bad-ass statements with her fashion and this was one of them. She embodied an entwined chain crop top by Vivianne Westwood paired with a checked skirt. Chic bangs completed the look.

This futuristic look was put together by none other than her bestie, Law Roach. According to me, these promotions played a peak in Zendaya’s fashion evolution.

The rising star made it to the Marvel universe right after Disney. The recent No Way Home promotions made some noise and Zendaya was the loudest with her outfit selections.

Bedazzled in a sheer nude floor-length gown detailing gorgeous black spider webs, of course manifesting the movie onto her dress, she absolutely owned the red carpet. The Valentino ensemble was styled with a dramatic black mask and Bulgari jewelry, finishing off the look with classy Louboutins. Another day, she wore a piece from the archives of Roberto Cavalli’s Autumn/Winter 2000 collection.
Remotely adhering to the theme with a simple black gown, completely backless except for a bodacious gold spinal cord detailing that was incredibly attractive. It was simply styled with gold hoops and a vintage bun. Her on-screen looks on Spiderman were not as flamboyant as she was playing the role of MJ, a teenage studious girl who didn’t seek any attention. Her style was introverted, like herself. A lot of jackets, layering, messy hair, and light make-up to implement her innocence.

She has not only represented the fashion industry but also contributed to it effectively. Like her collaboration with Tommy Hilfiger and other prominent brands, she launched her own brand “Daya” in 2018, at age 20. The brand consists of gender-fluid, size-free clothing, flexible to anyone and everyone. The ethos is built by “affordability, diversity, and inclusivity” stating what she stands for. 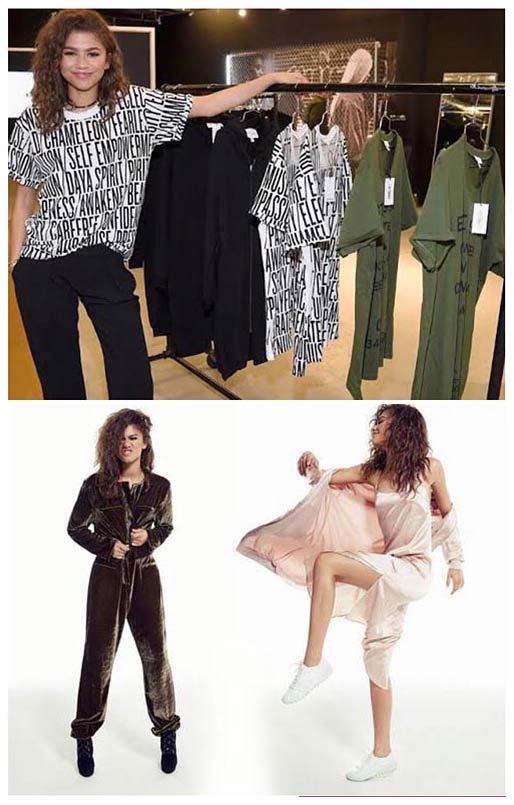 Most of the collections seem to consist of jumpsuits and loose-fitted clothes that elevate the purpose of being universal. Sources also say that the complete collection retails for less than $160 and has sizes ranging from 0-22. Pretty different from most celebrity brands, so we’d like to try it for sure.

The Met Gala is an event that shouts “go big or go home!” and Zendaya has done justice. The looks she served through the years at the Met are not something to forget. Let’s dive into some of her best pieces: As for Zendaya’s first Met Gala, she wore Fausto Puglisi, strappy on top, a flair red skirt with a circular train. The skirt had large motifs of the sun that reflected on the theme. The look was heavily accessorized with handcuffs, bracelets, and a tiara of the same solar theme. Safe yet edgy for her first time, don’t you think?

Though Z could have played a better game, she fit in well with the theme and looked cutting-edge with the whole Cleopatra vibe, yet futuristic. The one-shoulder Michael Kors bodycon gold gown looked super flattering on her. The main accessory was the hair – a ’60s inspired bowl cut and a few rings.

She decided to rebel a little against the theme and wore an extravagant couture piece. The Dolce & Gabbana ball gown had eccentric parrot and flower prints. The off-shoulder and the sinch in the waist were just gorgeous. The look took off with bright coral lips matching the gown, a wild afro, and a long train.

The one phrase that came to my mind seeing this look was “Knight in Shining Armor!” This look was a rather distinct one in Zendaya’s fashion evolution.

Z looked fierce in a custom Versace metallic gown that was armored on the shoulders and neck, her classic train, and a spikey belt. She nailed the drip in a short red bob with bangs.

Her presence and growth in fashion have been evidently versatile. There’s probably something about Zendaya’s fashion evolution that many get inspired by. Or maybe it’s just the publicity! A recent clip of her boyfriend Tom Holland went viral. It was him hearing the noise that people made when she arrived and said, “I think Zendaya just showed up!” Well, that explains it.

So these were some of the best looks throughout the journey of Zendaya’s fashion evolution. Do you agree that this starlet has made some heads turn with her fashion taste? Let us know in the comments below!

Sreya B. is a Fashion Journalist at ShilpaAhuja.com. She also takes interest in psychology and social issues. Socializing and networking are her forte. To sum it up, she is a people’s person!

She found passion in fitness during lockdown by curating her own home workouts and diets and successfully met her goals. She wishes to bring change through quality journalism and creating awareness.