Discover my incredible new beauty transformation and Voyd Incredibles 2 beauty tutorial! The new superhero from Incredibles 2 has a cool look! Watch me do a faux bob hairstyle and wear eye mask makeup for a super cool costume idea.

Hey gorgeous! A 14-year long wait, and Incredibles 2 is finally out! And I’m super excited. And of course, I had to do a video on it! This time I tried a look of one of the new Supers from the movie – Voyd! Ready to check out how I transformed?

Today I’m going to be doing this Voyd-inspired hair and makeup look. Voyd is one of the news Supers from Incredibles 2. She is the next generation. And even though she has a really meek personality, she has a really nice and badass style.

I’m a big Incredibles fan. Voyd’s look has a cool color palette. She wears a blue and green suit and she has blue hair and a matching eye mask. And even though I relate to Elastigirl’s personality more, I really don’t really don’t relate to her mommy-style. In fact, I wonder how Edna Mode ever even approved of her style! If I were Edna, I would never approve of her style.

But I think Edna would approve of Voyd’s hair. It’s really cool and I think for a teenager, it’s kind of, you know, like an edgy, badass look. And it can also be a cool summer look (if you’re looking for a haircut)!

And even if you have long hair like me, you can still imitate the style a little bit. This would be a great idea for a Halloween costume or for comic-con. And you could even wear it without the eye-mask, if you’re just going to college or going out casually.

The eye mask itself reminds me of Chanel’s Spring/Summer 2016 ready-to-wear collection that had models walking the runway wearing eye mask makeup. So let’s get started!

Also, here’s the timelapse of my Voyd Incredibles 2 transformation:

Enjoy the time lapse of my latest video – transformation into Voyd – the new superhero from Incredibles 2! Check out the full hair and makeup tutorial (Link in bio).

Before starting the hair and makeup, you wanna straighten your hair and prep your skin. I used Maybelline One Day Perfect primer and L’Oreal Infallible 24Hr Foundation. And I also used MAC Pro Longwear Concealer NC25. So let’s get started with the hair!

If you have long hair like me, you can create a faux bob. Voyd’s hair looks like a regular bob from behind, and from the front, it’s medium length, side-parted hair. So start by giving a deep part to your hair. Then pin the side tightly near one ear. Leave your shorter layers in the front. So separate them by combing them and holding them in one hand.

For the rest of the hair, we can tie them somewhere in the middle with a matching skinny hair tie. Now these lengths of hair, let’s roll them inwards and pin them underneath your hair, at the back of your head. And then lightly comb them or spread them with your fingers, so that you completely cover up the pins. So there you go! All the hair is done!

For the makeup, start with the eyeshadow primer. But before you do that, since this look is all about the eyes, you want to choose which one to use. A good idea is to run a few tests on the back of your hand, to test different bases and find the right one which makes your eyeshadow look the most pigmented.

I ran a few tests using the M.A.C. Paint Pot, Dior eye shadow primer, and Sportsgirl white eye pencil, which looked the most pigmented. All right, so first use something like Dior Backstage eye prime. This look contains really less of eye contouring, and it’s almost all about the eye mask. So really, you need to layer your eye primer all over the lid. And then use a turquoise eyeshadow, I used one by Body Shop and I wore it with this Vega eye shadow brush.

Don’t forget to line your upper waterline with black eye pencil bgefore wearing the eye shadow. After this, I used gray eyeshadow by M.A.C. called Night Divine on the outer corners and crease of my eyelids to add some depth.

Voyd uses this really thick liner almost all over her lid, so that’s gonna be my next step. I used Maybelline Hyper Glossy eyeliner. And since we’re doing an animated character look, it doesn’t hurt to make it a little thick and dramatic.

I also used Clinique High-Impact mascara on my lashes, but not too much, since Voyd’s look is not about the eyelashes, it’s more about the eye mask and the eyeliner. Also it’s a good idea to comb the brows a little bit.

Now Voyd’s eye mask almost comes to her cheekbones, but you can still see the blush and you can also see that there’s a hint of contouring over there. So before wearing all that, I wore M.A.C. Mineralize face powder, since it will help me set the concealer.

And after that, I added M.A.C. powder blush in Frost. And I also added a teeny bit of it on the tip of my nose. For sculpting, I used Diorskin Nude Tan Matte bronzer with the Kabuki brush that comes with it. And since Voyd has a really narrow jaw, her shape is almost like in an elongated almond. So I just wore this bronzer on the sides of my jaw as well. And just blend it until no harsh lines are seen.

For the lips, I used Dior lip liner pencil in Candy Rose.You wanna line your lips a little bit on the inside because she has really thin lips. And for the lipstick, I used Christian Dior 766 Hibiscus. It’s a really nice pink, very bright pink color. I also used Maybelline lip liner in 238 Midnight Plum. All right, that’s as close as I could get to Voyd’s lip color.

All right, so there it is. This is a bit of the dramatic look that you can wear if you don’t want to draw the eye mask on. But I’m gonna, of course, go ahead and move on to drawing the eye mask.

All right, so of course, the eye mask is slightly bit tricky. It’s really oval and rounded, but its outer corners are very slightly bit tipped. I’m gonna draw it on with the Sportsgirl white eyeliner pencil first. And then I’m gonna put eyeshadow all over the drawn area. So first you want to demarcate how much above and below your eyes the eye mask’s gonna go, so that you can easily make it symmetrical on both sides. Of course being symmetrical doesn’t matter so much since half of her eye is already like, covered by the hair as well. So it’s really okay if you go wrong a little bit here and there.

The things to remember are that when you are filling in the edges, that’s where you need to be having the most steady hand and as well as when you’re coming down, when you’re filling the downwards areas, that’s when you need to really make sure that you’re tapping off the excess of the brush so that nothing falls off below this mask.

Since we’ve made the demarcation with the white eyeliner pencil first, it’s really easy to stay inside lines, since the product just doesn’t stay on on my face. It stays on really better on at the top of the eyeliner pencil. So even if you messed up just a slightly bit, it’s really okay. The product’s just not gonna stay on outside the lines.

My mask had become a little bit too peacock-y, a little bit too bright. So I just mixed a little bit of black eye shadow to make it slightly bit darker. So, to darken the eye shadow, I used black eyeshadow by L’Oreal- 920 Lush Raven. And I just went over the top part only so that we can have a slight bit of a gradient as we come down. And it’s gonna look good in real life, since it’s gonna be as if the light is hitting the bottom part of the shade. I used a really light hand to go over this as we don’t want to mess up the color that’s already there.

Contouring a little bit on the sides of your nose is the last step. I used Vega Foundation Brush and the Dior bronzer again. Since Voyd has a very tiny, triangular nose, I just contoured underneath the eye mask only.

All right so this is the final look. If you liked my Voyd Incredibles 2 tutorial, please let me know below, or tag me on your Instagram pictures @shilpaahujadotcom! Muaah!

And now we all can try it. Everyone can be a super. And when everyone’s super… No one will be. 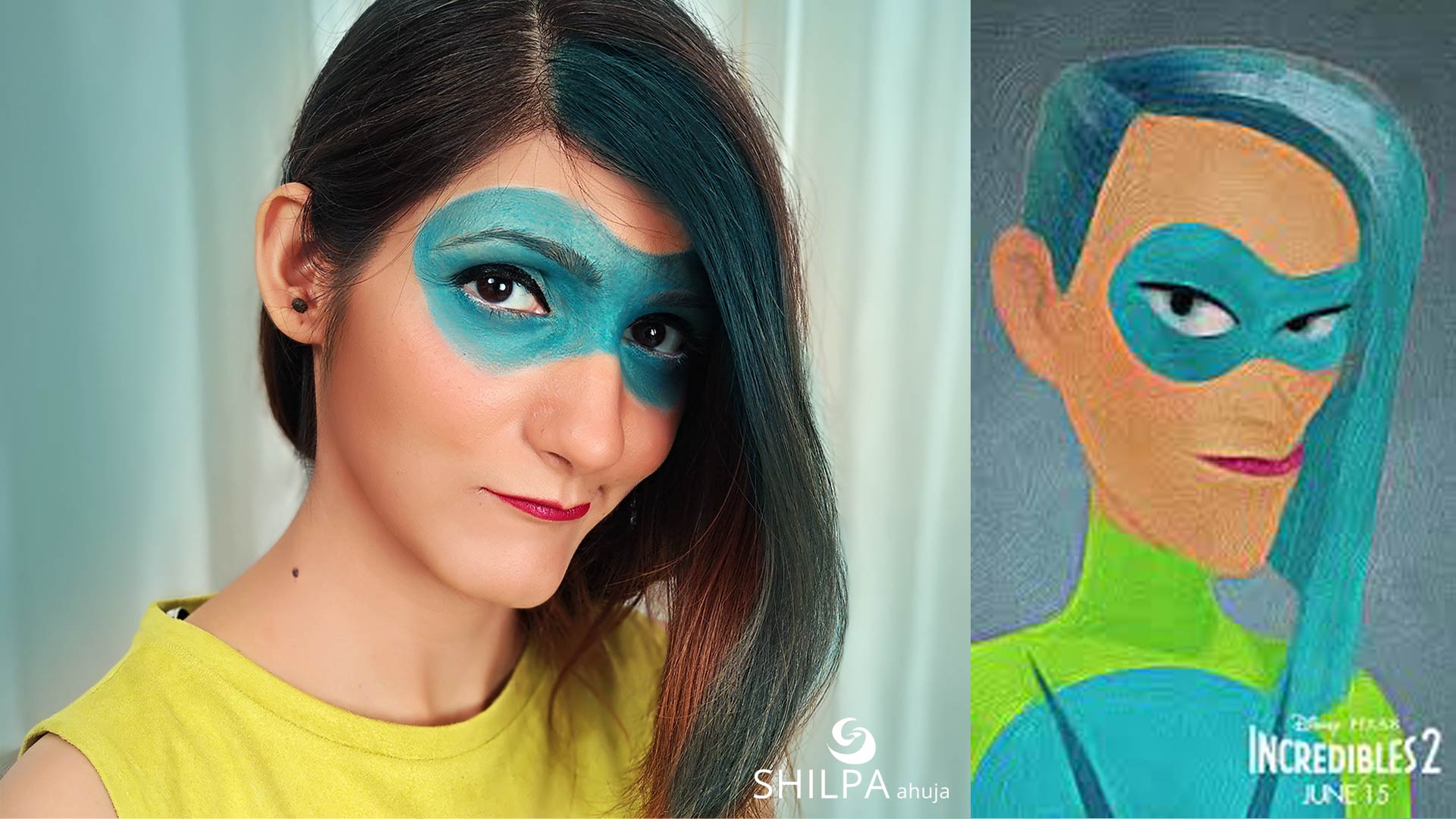