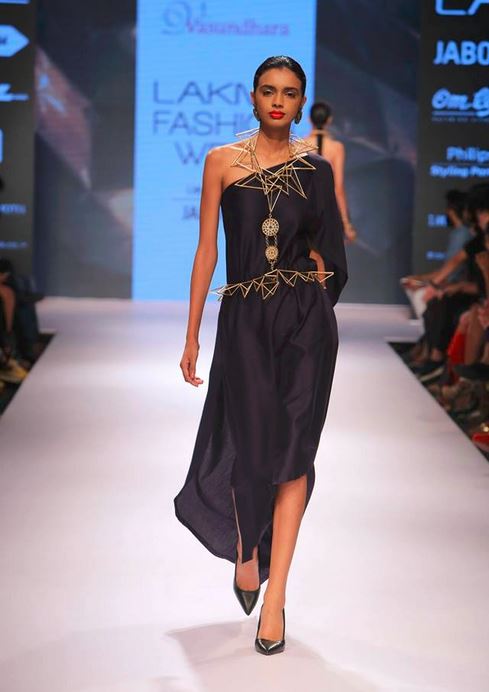 If I took a first look at the collection’s picture gallery I put below, I’d be led into thinking for a split-second that I were looking at Valentino’s hugely popular Fall-Winter 2015-2016 collection that had received a standing ovation last month. But, no no – I remind myself, this isn’t.

It does remind one of Valentino’s collection in more ways than one – a collection entirely using raven black and bright red as the only two colors, solid-colored pieces with gold jewelry, use of the headpiece, one-shouldered dresses, using black lace for the showstopper, all adorned with exotic gold jewelry.

I’ll compare the two collections some more with pictures: “It does remind one of Valentino’s collection in more ways than one – a collection using raven black and bright red , solid-colored pieces with exotic, gold jewelry, use of the headpiece, one-shouldered dresses, using black lace for the showstopper.” The jewelry by Vasundhara Mantri was the most striking part. 3d geometric pieces that aren’t necklaces or belts but contraptions that at times remained like shoulder necklaces or bracelets or headpieces, and at times merged the necklaces with belts to form the outfit itself. Some even combined the elements of traditional Indian jewelry like circular floral motifs with chains.

3d geometric jewelry has been in vogue since much of last year, especially made popular by designers such as Titania Inglis and Mei Lee. Images below give a glimpse of Tatiana’s designs from Spring Summer 2014 collection that made waves in the fashion industry. It is interesting to have Vasundhara Mantri make a case for the futuristic design typology in the Indian context.

“3d geometric jewelry has been in vogue since much of last year, especially made popular by designers such as Titania Inglis and Mei Lee.” 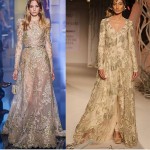