Discover the many different types of headgear for both men and women below in our fashion words glossary for types of hats.

Baseball Cap (N.) [beys-bawl kap] Also known as snapbacks, a baseball cap is a round top hat with a stiff panel protruding in front.

Beanie (N.) [bee-nee] A knitted cap worn to cover the ears during winters to keep warm is known as a beanie hat.

Beret (N.) [buh–rey] A round flat-topped hat, generally made from wool, with volume at the sides is known as a beret hat. (Different from hair barrettes)

Boater (N.) [boh-ter] Also called can-can hat, a boater hat is a type of straw hat with a flat top.

Bonnet (N.) [bon-it] A bonnet hat is a 19th century hat that covers the entire head, usually made with cotton or silk with a wide, stiff, face-framing brim and ribbons to tie under the chin.

Cloche (N.) [klawsh] A fitted 20th century hat typically made from felt with a small rounded brim, covering the whole head and coming down till just above the eyebrows is called cloche hat.

Cowboy (N.) [kou-boi] Typically made out of leather, cowboy hats are wide brimmed with a crease at the crown.

Deerstalker (N.) [deer-staw-ker] Traditionally worn while hunting, deerstalker hats are plaid, rounded at the crown and have stiff panels on either side of the head.

Derby (N.) [dur-bee] Derby hats are also called as bowler hats and are rounded at the crown and curved at the brim.

Fedora (N.) [fi-dohr–uh] A fedora hat is a type of hat with a curled brim, vertical crease at the crown and two dents on either side.

Gatsby (N.) [gats-bee] Also known as newsboy cap, a gatsby hat is similar to a beret but with a stiff front panel like a baseball cap.

Panama Hat (N.) [pan–uh-mah hat] Panama hat is a cream colored brimmed straw hat made from the leaves of the toquilla palm plant.

Pillbox (N.) [pil-boks] Made famous by Jackie O, a pillbox hat has no brim and a flat top. 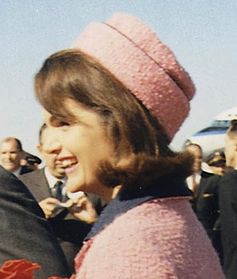 Pom-pom beanie (N.) [pawm-pawm bee-nee] A type of beanie that has a decorative ball, usually made of wool on top of it, is called a pom-pom beanie. Also pompom beanie.

Skully (N.) [skuhl-lee] A skully cap is a variation of a beanie with a very tight fit and in a light fabric. Popular in the hip hop and rap scene.

Sombrero (N.) [som-brair-oh] Sombrero hat is a type of hat, popular in Mexico, with a broad brim, tall crown and a chin tie.

Top hat (N.) [top hat] Also known as topper or cylinder hat, a top hat is brimmed with a high crown and is typically black.

Trapper (N.) [trap-er] Popular in Russia, a trapper hat is made from fur with flaps that can be fastened under the chin to stay warm in winters.

Visor (N.) [vahy-zer] A cap with a stiff front panel and no crown, worn to keep the sun out of the face is called as visor cap.

Also in types of accessories: