Season after season, we come across new trends, styles, and collections. But how often do we reckon over the hard work and thought that goes into creating one dress? Although, we are glad to have some wow fashion designers who work hard to make it all seem effortless. They relentlessly amaze us with the brilliance of their designer collections.

With changing seasons, things change for designers too! For instance, their popularity, price range, status, and of course, collections. We looked up some 500 Indian fashion designers to discern the ones who are doing their job in the best way possible! So to create definitive rankings, we compared their work across 15+ criteria, through weeks of research and tireless analysis. Read the article to find out which designer came up in the top 100.

Extensive research and thorough analysis form the backbone of our articles at ShilpaAhuja.com. Even though ranking top Indian fashion designers was a tough row to hoe, but our love for curating credible content for you, kept us going. In order to determine the ranks, we considered several criteria such as:

And a lot more. After compiling and analyzing all the different aspects of the collected data, we gladly present to you the list of top Indian  fashion designers. 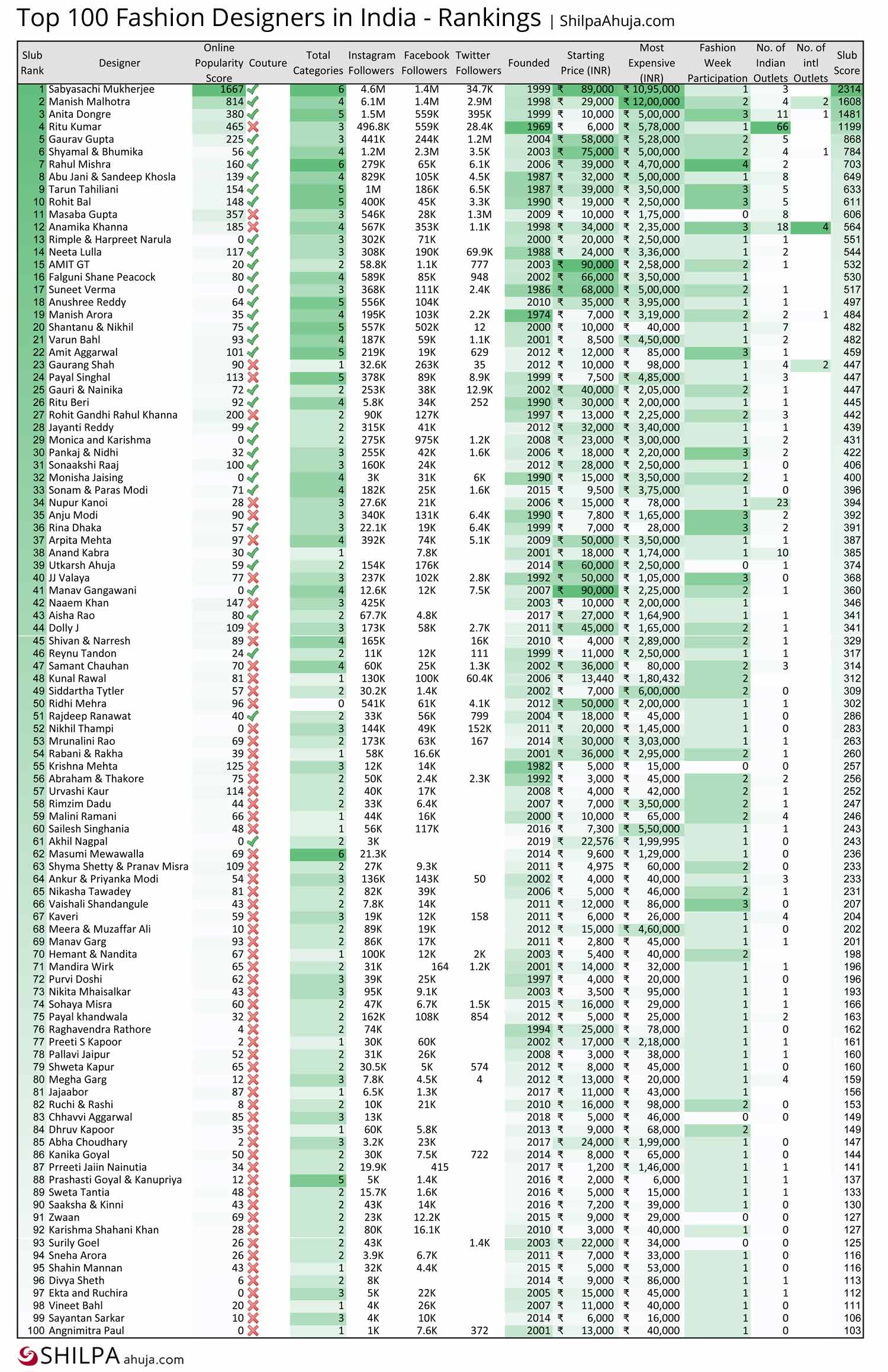 Sabyasachi Mukherjee, one of the top Indian fashion designers in our previous rankings (2017), has since risen to the top position. Starting out in 1999, he has come a long way. This revered designer has showcased his collections in leading Indian and international fashion weeks. Of late he has trudged away from fashion weeks and presenting online-only collection premieres.

Accessories and wedding wear are his forte, almost every girl desires to become a Sabyasachi bride! No way we can forget the bewitching baby pink lehenga Anushka Sharma wore for her wedding. He also dressed Priyanka Chopra and Deepika Padukone for their high-profile weddings. In the last decade Sabyasachi has also introduced a jewelry line and worked on designer shoe collections with Christian Louboutin. 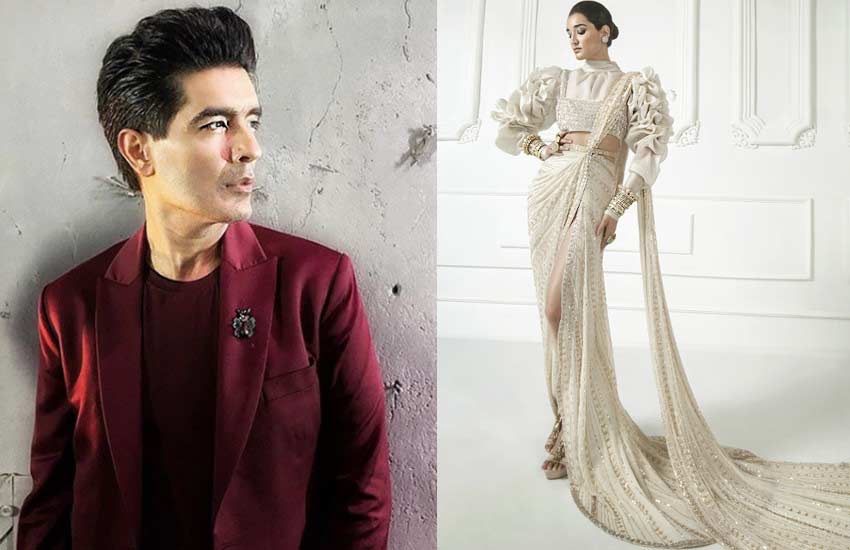 This model turned designer has been a constant heartthrob. Manish Malhotra is one of the most successful and popular faces of the Indian fashion industry. Moreover, took home several awards for his exceptional costume design. He has designed the costume for numerous Bollywood hits. His designer wears are the holy grail for many popular faces in Bollywood.

Often times his collections are influenced by the western world seamlessly incorporating new elements in ethnic wear. Having achieved brilliance in creating masterpieces for both men and women, he now runs a few fashion courses too. Celebs like Deepika Padukone, Aishwarya Rai Bachchan, Kareena Kapoor have been his showstoppers in the past. 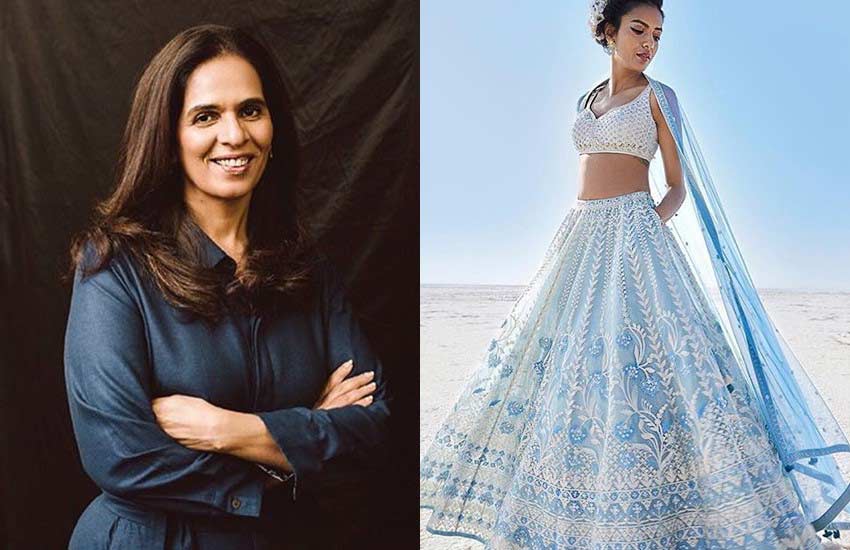 Born and brought up in Mumbai, Anita Dongre is the owner of multiple labels namely AND, Global Desi, and her eponymous label that have many stores across India. In addition to that, she launched her sustainable clothing brand named Grassroots. She also has a niche for jewelry designing.

Her jewelry brand, Pink City, is inspired by Rajasthan and its culture. Her designs are a fusion of ethnicity and modern sensibility. She has won several accolades for her excellent sense of fashion design. She also won the EY Entrepreneur of the Year award in 2014. Not much has changed for Dongre in terms of ranking though, even in the current ranking for top Indian fashion designers, she remains at the third position. 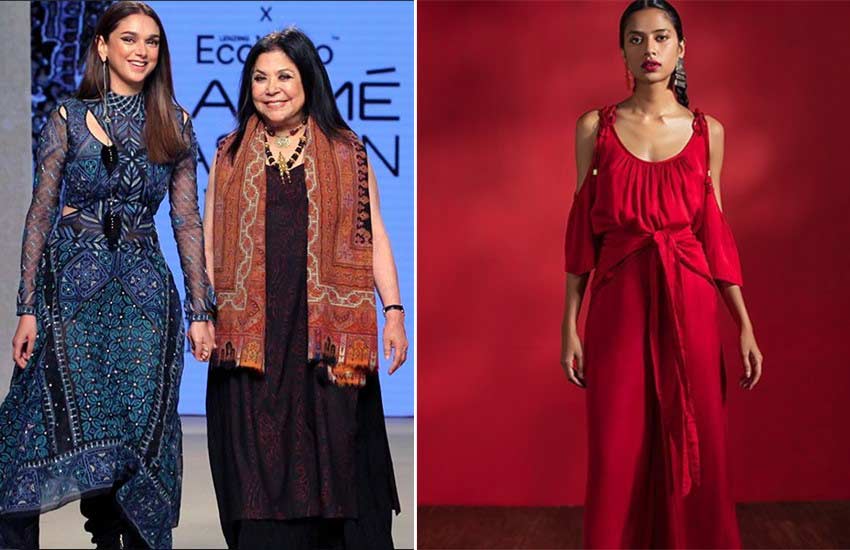 Ritu Kumar is another of the top Indian fashion designers from Kolkata who proved her mettle in the fashion industry. She started with evening and bridal wear in the narrow lanes of Calcutta in the 1960s. Owing to her meticulous attitude, she’s now the owner of multiple stores all over India and abroad.

Her label, Ritu Kumar, launched in 2002, deals in both menswear and womenswear. She once started with block printing and has stayed true to her roots over the years. She was also awarded Padma Shree in 2013. 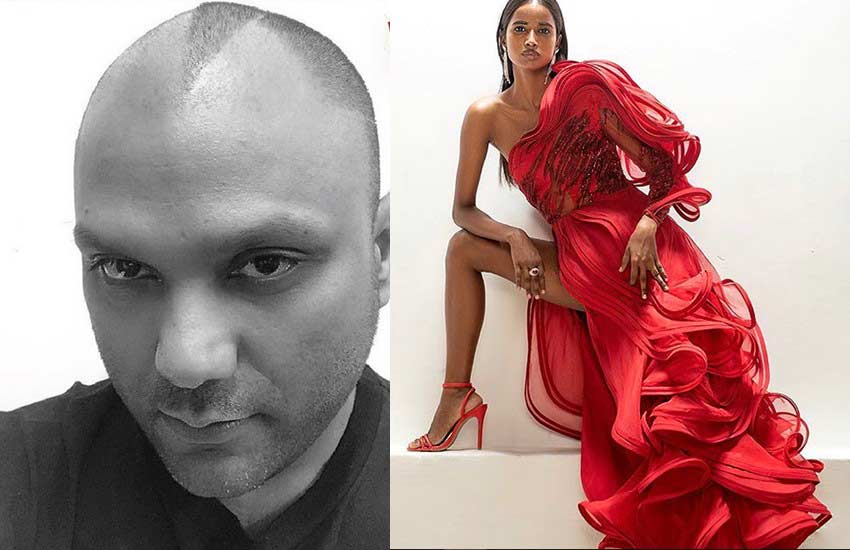 Gaurav Gupta is a bridal couturier. One of his most important contributions to the fashion industry is his saree gowns. His stores are in Delhi, Kolkata, Mumbai & Hyderabad. Gupta’s unique draping style and architectural silhouettes were a new wave in the huge ocean of fashion. Usually his collections flaunt broad shoulder pads, metallic hues, and structured silhouettes. 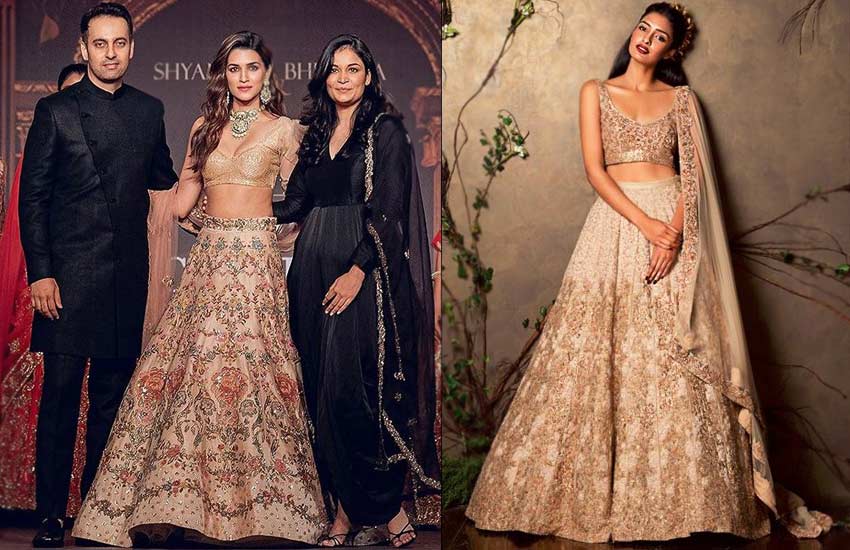 Shyamal Shodhan and Bhumika are the Ahmedabad based power couple who share a mutual love for fashion design. They launched their eponymous luxury pret in 2000. They design menswear, womenswear, and bridal wear. Shyamal and Bhumika have also showcased their collections several fashion weeks at the national level. They aim at reviving the glory of Indian culture through their rich embroidery and opulence. An alumnus of the National Institute of Design (NID), Rahul Mishra never fails to stun us with his wearable couture, botanical motifs, and magnificent workmanship. He has showcased several collections at Paris Fashion Week too, and was also the first Indian to bring home International Woolmark Prize in 2014. However, Mishra believes in creating designs that are rooted in Indian tradition yet daring enough to attract universal attention. Abu Jani and Sandeep Khosla are famously known as ‘The Boys’ of the Indian fashion industry. Coming from a humble background they started off together in the ’90s. Soon they opened their label named Matahari and Jashn. Later changed to Abu Jani and Sandeep Khosla. They are known for dressing up the Bachchans. Their designer menswear and womenswear speak volumes of the royal style of Indian clothing, and they’ve also designed interior projects. Tarun Tahiliani is a Delhi based designer. Regardless of a business background he developed a taste for fashion post marriage. He also co-founded India’s first multi-designer store named Ensemble. Tahiliani not only mastered the art of fashion design but also tried his hands at jewelry design, interior design, and event design! His designs take inspiration from Indian heritage and are rooted in rich embroidery work and natural hues. 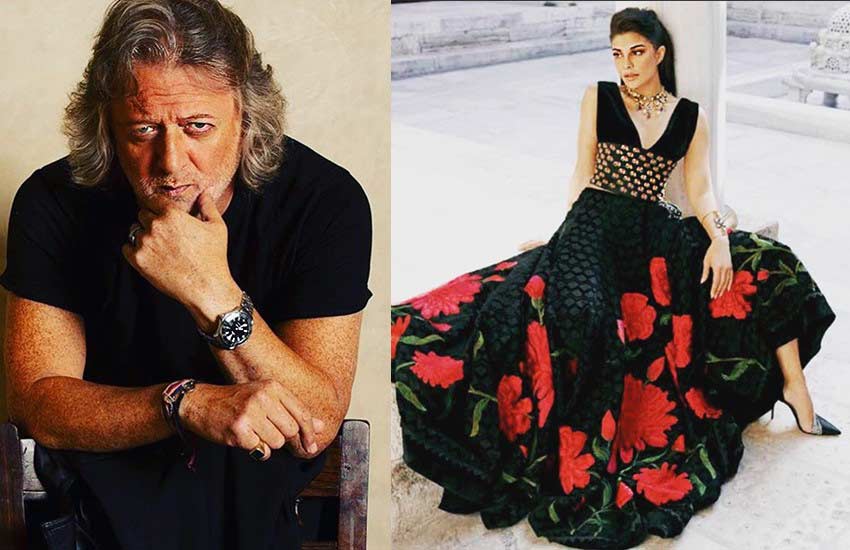 Rohit Bal is a couturier who is native to Kashmir. Besides, he’s the one who designed clothes for the popular show ‘Kaun Banega Crorepati’. He designs menswear, womenswear, and jewelry. Blurring the lines between gendered clothing, he is famously introducing menswear silhouettes in womenswear clothing. His collections are often a blend of dark shades with bright flower and bird motifs, reminding us of the surreal beauty of Kashmir. 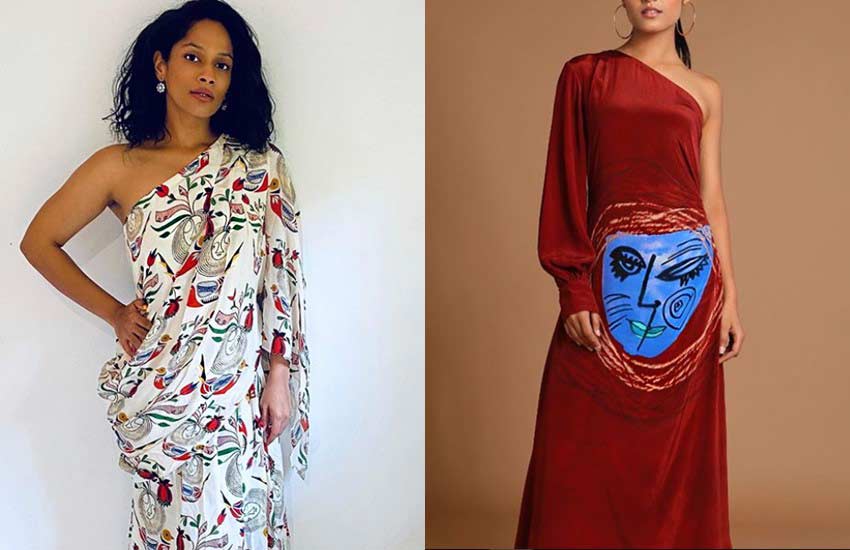 Masaba Gupta is another couturier who launched her label named ‘House of Masaba’. Gupta has been in the headlines not only ’cause of her designs, but also for her recent Netflix series, ‘Masaba Masaba’. She also started Masaba Lite an affordable clothing line. Her designer collections showcase bold and quirky prints, breezy style, and contemporary looks. Next up in the list of top Indian fashion designers is Anamika Khanna. Her abstract designs and use of Indian textiles in western silhouettes set her apart. Bollywood A-listers, for example, Anushka Sharma, Deepika Padukone, Katrina Kaif, and many more are often spotted in Anamika Khanna. Her brand deals both in menswear and womenswear. The attires worn by Deepika Padukone in ‘Padmavat’ were breathtaking! Ever wondered who stitched those garments? None other than this powerful duo, Rimple and Harpreet Narula. Starting out 20 years ago, they now own flagship stores in Ludhiana, Delhi, and Chennai. They are redefining bridal wear with their staple zardosi work, heavy embroidery and embellishments. Their designs drive inspiration from the affluent past of Indian civilization. 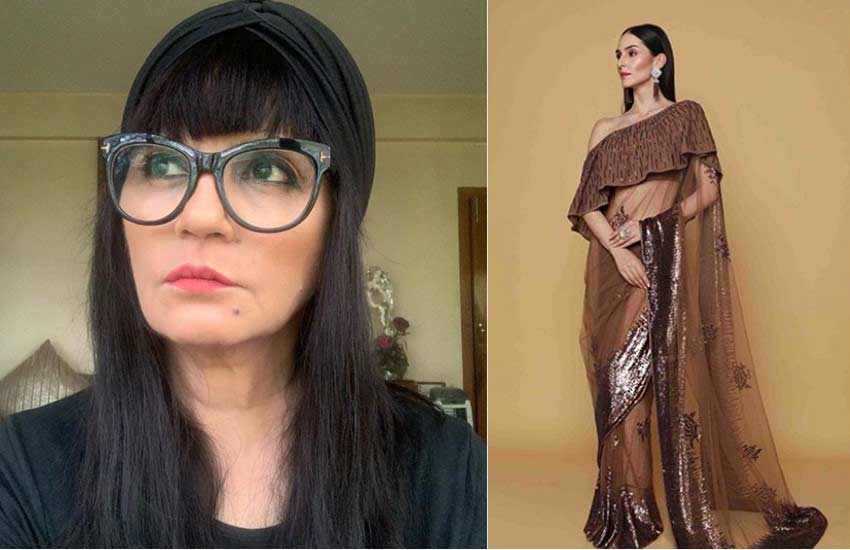 Additionally, she won numerous accolades as the best costume designer for movies like Taal, Devdas, Jodha Akhbar, etc. She was also referred to as the ‘Fashion Designer of the Decade’ in 2016. 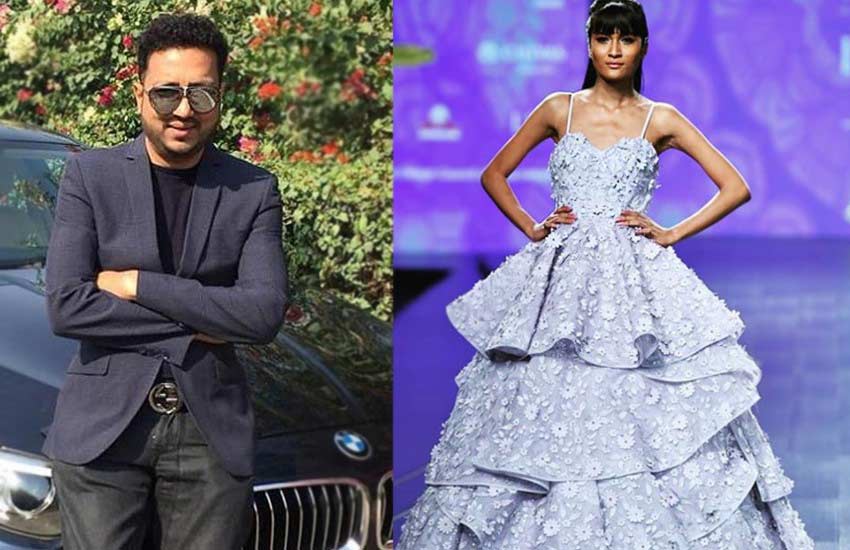 Amit GT is another famous couturier whose excellence lies in creating flamboyant evening dresses for both men and women. According to him, designers are ‘dream weavers’ and his attires are nothing less than a dream come true! His collections portray sensual drapes, use of frills and feathers, and structured silhouettes. His clientele spans both in India and abroad. Hailing from a different background altogether, Falguni and Shane found a home in fashion. In contrast to their prior background, they launched their first flagship store named Peacock Prêt in 2003. Since then there was no looking back! Additionally, they have a tremendous foreign clientele comprising of Lady Gaga, Nicki Minaj, Katy Perry, and many more. Their collections usually feature use of feathers, western influence, subtle embroidery, sleek and sensual styles. 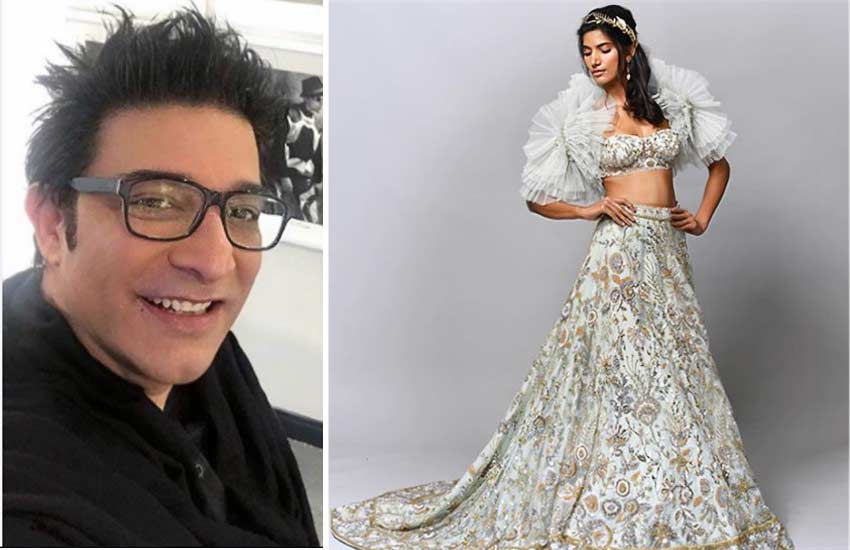 Suneet Verma is yet another couturier of the Indian fashion industry. He’s the first Indian fashion designer to be a part of the designing team of the BMW 7 series. His designs feature heavy embroidery, unique blouses with exaggerated ruffles, and lots of glitters! 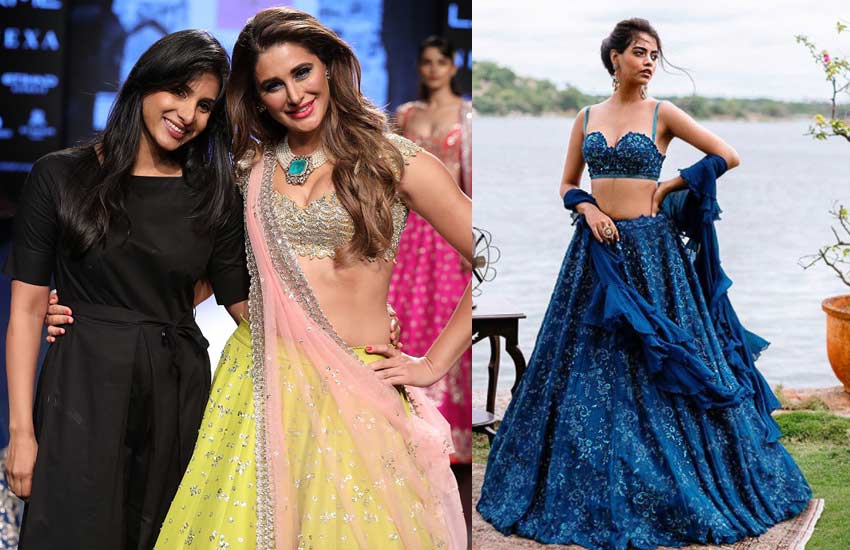 Anushree Reddy is a self-taught designer. Formerly, she started working as a fashion editor in a magazine. However, she realized her true calling lies in fashion! Soon enough, she launched her eponymous label in 2010. Three years later she participated in Lakme Fashion Week which earned her reputation and wide clientele.

Ethnic and bridal wear are her niche. Her dresses are sported by celebs like Athia Shetty, Amrita Rao, Tapsee Pannu, etc. By and large her designs include floral patterns, use of lace, gossamer fabric, and detailed craftsmanship. Manish Arora is an alumnus of the National Institute of Fashion Technology (NIFT), Delhi. Arora has done not only Indian but also International fashion weeks, London, Paris, Miami, to name a few. Besides, he has partnered with different brands such as Amrapali, Biba, Koovs, etc.

He launched his own luxury prêt owing to the increasing popularity in India. Arora’s collections frequently exhibit the use of neon colors, exotic headgears and accessories, and an unusual blend of Indian tradition and modern sensibilities. Shantanu and Nikhil Mehra are the sibling couturiers. This duo often use classic zardosi work, intricate borders, detailed embroidery, gloss, and sheen, which speaks for their collections.

Other than these top tier designers, there are also many Indian fashion designers who are excelling in the industry with either their memorable designs, keeping our traditions alive or using state-of-the-art techniques.

So, that was our list of top Indian fashion designers. Altogether we have some amazing designers who are working hard to take the Indian fashion industry to new heights. Did your favorite designer make it to our top 100 list? Share it with us by tweeting @shilpa1ahuja!

Rishika Agarwal is a Staff Writer at ShilpaAhuja.com. She has completed her Bachelors degree in English Literature from Magadh University, Patna. She aspires to build a career in fashion writing, and is currently contributing for Shilpa Ahuja Digital Media.

Before this, she curated content for a media firm, Patna Beats, writing news articles, promotional articles, and creating podcasts. She has also worked in schools teaching English, creative writing and communication to younger students.

Her love for writing dates back to her teenage years, it used to be her escape from reality. She’s an awesome listener, she’ll always have an ear for your stories. She enjoys sharing her views on social issues. Having many friends, she’s a private person at heart. She was a big-time foodie, a voracious reader, and an ambitious traveler. When not writing, she snuggles up in a quiet corner with her novels. She abides by the rule ‘what goes around comes around!’