Discover the top female superhero costumes (and villains costumes) in Hollywood and TV. See how they evolved from the 50s Supergirl to the sex-symbol of the 2000s!

Hey gorgeous! 2015 has been mostly a year of guy-flicks. So I thought why don’t we take a look back at some bona fide chick-flick stuff. I often write about fashion It-girls from the movies. But today, I thought that not enough attention is given to the heroines.

How did the super-heroines (and villains) evolve from the superhuman saviours to the sex-symbols that they are today? Have they always been pin-up-worthy? Let’s check out some pop-culture history! Let’s see some of the coolest and/or most popular female superhero costumes and villain looks in Hollywood and TV ever and find our answer!

The first most iconic fiction superheroine was Wonder Woman who first appeared in DC Comics in 1941. She represented the era of gender-equality and the liberated woman. Her costume has pretty much had the same feel since the beginning, but back then she had dark, short curly hair, and wore a flared skirt.

Batwoman brought power into the superheroine costumes. Her black costume was skin-tight but with a corset worn over the top, and she added a mask, Goth dark lipstick and a cape. Also, she has replaced the girly skirt with tight pants – which seem more comfortable for doing action! However her short dark curly hair is quite like Wonder Woman’s.

Female superhero costumes in this era seem practical. I understand that wearing a corset over your costume seems odd, but it’s only as odd as superheroes wearing their underwear over their costumes!

1959: Supergirl (Kara Zor-El) in The Supergirl from Krypton

The original Supergirl appeared in DC Comics with Superman as his cousin. She had a school-girl uniform-like innocence to her costume – a flared skirt attached to a top that looked like Superman’s, with the red cape and boots. And short to medium blonde hair that would stay in place, allowing her to fly and fight!

The gorgeous femme fatale is alluring and also powerful. The Baroness borrowed some style from Batwoman. But started the trend of these cliché female Superhero costumes – the skin-tight black leatherette costume with a zipper and a logo. Complete with boots and gloves. And lipstick!  And check out her long hair.

Wonder Woman’s frilly skirt gave way to what we would now call a retro bikini-bottom! And she has long hair now, blown out into loose waves. Overall, I see her losing her practicality already. If you’ve ever jumped wearing a strapless bra, you’ll know what I mean. Plus I find long curly hair to be a nuisance when I am fighting crime.

Supergirl had had her costume revamped, with longer hair, a more flared cape and a frilly skirt, much shorter than the original school-girly one. Plus she’s been working out! Look at those muscles! She’s kicking ass!

Other than the mask and stitched-seams, Catwoman’s costume is a cross between the Batwoman’s and The Baroness’s of G.I. Joe. They kept the orangey-red lipstick and added the now-famous “cat-eye” look.

This is a creative one. It’s sexier than a typical warrior costume, in that it has an embossed bra and a tight leather top, but then it’s sexy in a non pin-up way. Like she’s sensual, but she can fight.

I think it’s a very interesting costume. It’s artistic as well as memorable. Like you could be Poison Ivy at Halloween and also have fun making it. Love the red hair with the green, and the ombre gloves. And the artsy eyebrows!

1998: Blossom, Buttercup and Bubbles in The Powerpuff Girls

Aww, these little superheroines make up one of my favorite TV cartoon shows, and their arch nemesis Mojo Jojo is one of my favorite super-villains ever. These girls were the real role-models for little girls in fighting real-life issues like bullying, sibling-rivalry and insecurities. So blame it on my fond pre-teen memories if I like their costumes. It’s not much – just striped dresses to match the colors of their eyes. But their eyes actually make their costume interesting – they’re big and ruthless and powerful and cute, all at the same time!

Ok, here’s the I-couldn’t-design-an-original-costume-so-I-used-the-clichéd-black-leather-female-superhero-costume-since-the-days-of-GI-Joe costume. They did think to add nude lipstick and white hair though. You have to give them credit!

Technically Lara Croft didn’t have superpowers, but she was a saviour and a hero. And sexy. That’s the thing about female superheroes. The early 2000s was the time when female superheroes were beginning to get unabashedly sexy. Well, at least for Lara, the cotton shorts and tank top is practical too.

2004: Elastigirl in The Incredibles

Elastigirl just ditched the whole sexiness debate for female superhero costumes and concentrated on a practical one. Afeterall her super power is to stretch like rubber. How can a girl do that if she’s wearing a teensy bralette? And she makes a case for short pixie haircut again. Which I love on her. She means business. And she has a sticky mask. And she wears her underwear over her pants like the male superheroes. Although she does like black leather. But only for accessories!

2004: Halle Berry as Catwoman in Catwoman

Ok, this costume went as far as a costume does to play its role in evolving female superheroes from saviours to sex-kittens! No real girl can fight crime when she’s risking wardrobe-malfunction every second of her life. Not unless she was a superhero. Which she was. And not unless that bra was stuck to her boobs. Which it doesn’t look like.

So ya, the only conclusion is that it was designed by a guy. Which, according to Wikipedia, it was. In fact, it even mentions that Academy Award-winning costume designer Angus Strathie said, “We wanted a very reality-based wardrobe to show the progression from demure, repressed Patience to the sensual awakening of a sexy warrior goddess.” Sure, all female superheroes have to have a “sensual awakening”.

This one has sort of come in the middle of the sensuality and comfort. Although Invisible Woman does end up looking like a model more than a superhero. 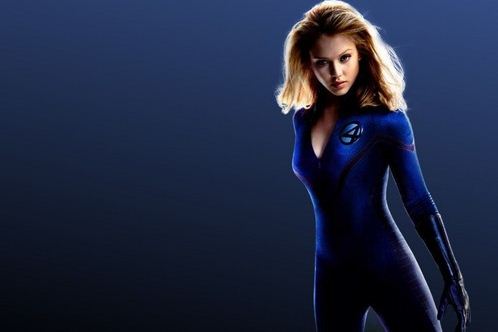 2006: Uma Thurman as G-Girl in My Super Ex-Girlfriend

The power-hungry G-Girl wears an easy costume – a sleeveless tee with a frilly skirt. And a logo-belt. It’s not one of the typical female superhero costumes, it’s more like a college outfit. But those boots are not meant for running and catching criminals. So it’s a good thing she can fly!!

The throes of sexy, body-hugging female superhero costumes have, obviously, created some sexual desires in men to see their women dressed like this.

Yet another fan-art with Megan Fox, this time as Wonder Woman but in her real costume. I think Wonder Woman’s costume is a great choice, again, for only Halloween, and not for being a superhero. Like how is one supposed to fight crime in a strapless top and a tight metallic corset. Those things are uncomfy as hell!

These type of female superhero costumes are sorta clichéd – the Black Widow wears yet another version of The Baroness from G.I. Joe. Although it doesn’t look like it would be comfortable for all the action! But it works, even if only stylistically, because she has ‘black’ in her name! And I like those gloves.

This is one of my favorite costumes, and she’s one of the most iconic female villains. Her costume is really designer. With a headgear and larger-than-Victoria’s-Secret-Angels wings. And dark velvet dress. And she finds time to do scary manicures and excessive amounts of contouring that would put Kim Kardashian to shame.

But here’s the interesting part – are we moving back towards the era where superheroines and female villains are being unapologetically feminine, and sexy, but not in a seductive way? What do you think about the female superhero costumes? Lemme know below! Or tweet at me @shilpa1ahuja!

1 thought on “Female Superhero Costumes Evolved from Practical to Sexy?”