5. Audrey Hepburn in My Fair Lady

Eliza Doolittle in the musical film My Fair Lady, played by Audrey, wore lots of white in the film (plus the biggest hats). Her period look featuring a white beaded ballroom gown described by ‘Audrey as an ‘absolutely divine dress’, was worn with long white gloves, diamond big necklace and a tiara. And this dress seems like what would later inspire the costumes of The Great Gatsby.

6. Grace Kelly in To Catch a Thief

The classic evening dress worn by Grace Kelly in the 1954 film To Catch a Thief can double as a wedding gown, and is timeless and classy. She paired it with a beautiful diamond bib necklace, and has since inspired many a prom dress.

Natalie Portman’s white ballet dress from the movie’s climax scene was not only beautiful and gasp-worthy, but also inspired many replicas, both evening and wedding dresses, such as this one… Combined with the intensity of the scene, her expressions and the choreography, this one really makes for an unforgettable experience.

8. Elizabeth Taylor in Cat on a Hot Tin Roof

Elizabeth Taylor looked classy in this timeless white sensation in the Hollywood movie Cat on a Hot Tin Roof, and was immediately copied by many women in the country. The dress is very minimalist, with a matching belt, a Greek-style V-neck and shoulder detail. I guess this simple wear-ability of the dress was the reason for its sensation, making Elizabeth order one copy for herself.

9. Marilyn Monroe in The Prince and the Showgirl

The 1950’s had Marilyn Monroe and iconic white dresses. This one, worn by the famous actress, is in silk with bead work, and embroidered flowers. The dress was particularly difficult to scene, because of many mishaps during the filming of the movie, but looked awesome nonetheless. 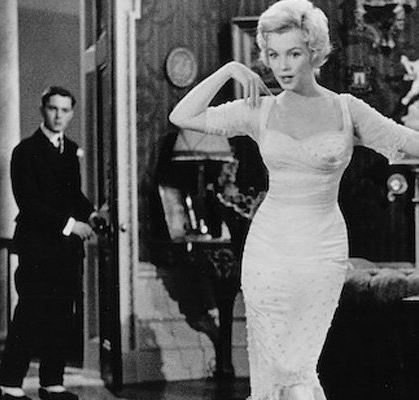 Carrie Bradshaw’s fashion sense in the TV series and films Sex and the City has always been undeniable. While I can point out countless outfits worn by Carrie that can be called iconic, her white dresses in each of the two movies are absolutely famous. Sex and the City (1) has her iconic flower dress, very Carrie, taking inspiration by the series that has Carrie wearing flower pins on tops and tanks. This dress that was worn with black peep-toes, a yellow clutch and Barney’s New York shopping bags, inspired many replicas. The 2nd movie has her wearing another gorgeous number with the iconic gold heels, sunglasses and necklace. Very chic.

Look out for more drool-worthy and the rest of the most iconic white dresses in the Part-2, coming soon! 🙂