Discover the best actress looks from latest Hollywood movie, The Man From U.N.C.L.E. Set in the 60s, The Man From UNCLE Movie Fashion is all about vintage!

Last weekend I had the pleasure of watching the latest Hollywood movie, The Man From U.N.C.L.E.… 2015 has been a year of guy-flicks, but this movie is hands-off the most fashionable movie of the year. Let’s check out some of their best looks. Here’s The Man From UNCLE Movie Fashion!! Set in the 60s, the film features some sharp looks and super-gorgeous vintage fashion. Set in Rome in 1963, The Man from U.N.C.L.E. is about the unlikely joint mission of a CIA agent Napoleon Solo and a KGB operative Illya Kuryakin. Gaby Teller, a car mechanic, joins them as they reluctantly team up to uncover a criminal organization. Gaby’s long-lost father is being used by this organization to construct a nuclear bomb. Their journey through Rome makes them meet the deceitful femme fatale Victoria Vinciguerra. All three in the mission have hidden agendas, but they must work together to stop the threat of nuclear proliferation.

The Man From UNCLE Movie Fashion

The movie has some gorgeous faces – Solo is played by Henry Cavill, the guy who plays Superman. Illya is played by Armie Hammer, of the Winklevoss twins fame from the Social Network. Swedish actress Alicia Vikander plays the fiesty Gaby. And Australian actress Elizabeth Debicki of the Great Gatsby plays Victoria Vinciguerra.

The costumes are elegant haute couture pieces and some vintage clothes too. The key actors’ and actresses’ characters had panache and charisma. Both women and men were impeccably dressed and it was a pleasure for the eyes to watch their style. 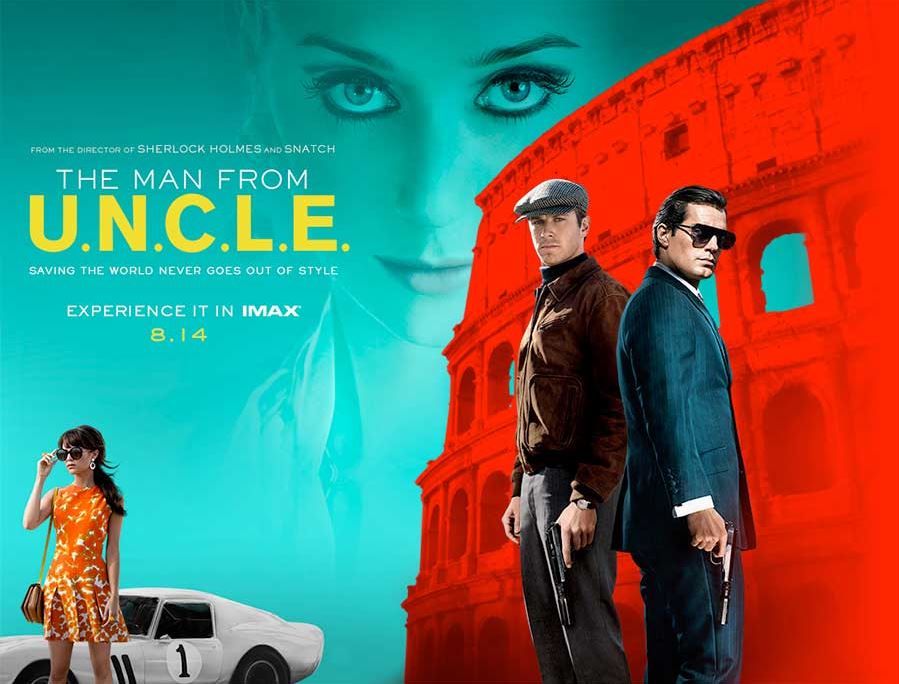 The Man From UNCLE: Women’s Fashion

For an action movie, it’s very unusual to find such attention to not just female fashion but also their characters. Both Alicia and Elizabeth Debicki play important roles and play them with flare.

Their styles, as their characters, are very different, but both have costumes with clean silhouettes and bold 60’s accessories.

Costume designer Joanna Johnston was inspired by the late 60s for the costumes, despite the movie story being set in 1963. “I’m absolutely crazy about a two-year period — ’67 and ’68 are magnificent in fashion,” Johnston said in an interview for Refinery29. “It’s a pocket before it moves into the ’70s vibe and after the early-’60s thing. I honed in on that because Guy (Ritchie) didn’t really mind. He didn’t want it to look academically anything, so he gave me a free reign. He wanted it to look just cool and sexy.”

Alicia Vikander – The Best Looks from The Man From UNCLE

Here’s the best looks of Alicia Vikander who plays Gaby. She wears structured minidresses with no belts. Her shoes throughout the film are of this loafer-inspired chunky low-heel type. And her accessories throughout remain solid-colored earrings and one bold ring with an engagement ring. She gets side-swept bangs with her signature side ponytail. Plus thick false eyelashes!

She starts in the drab overalls at her car repair workshop with a broad belt. How cute is that head scarf over poofy hair tied into a side ponytail? 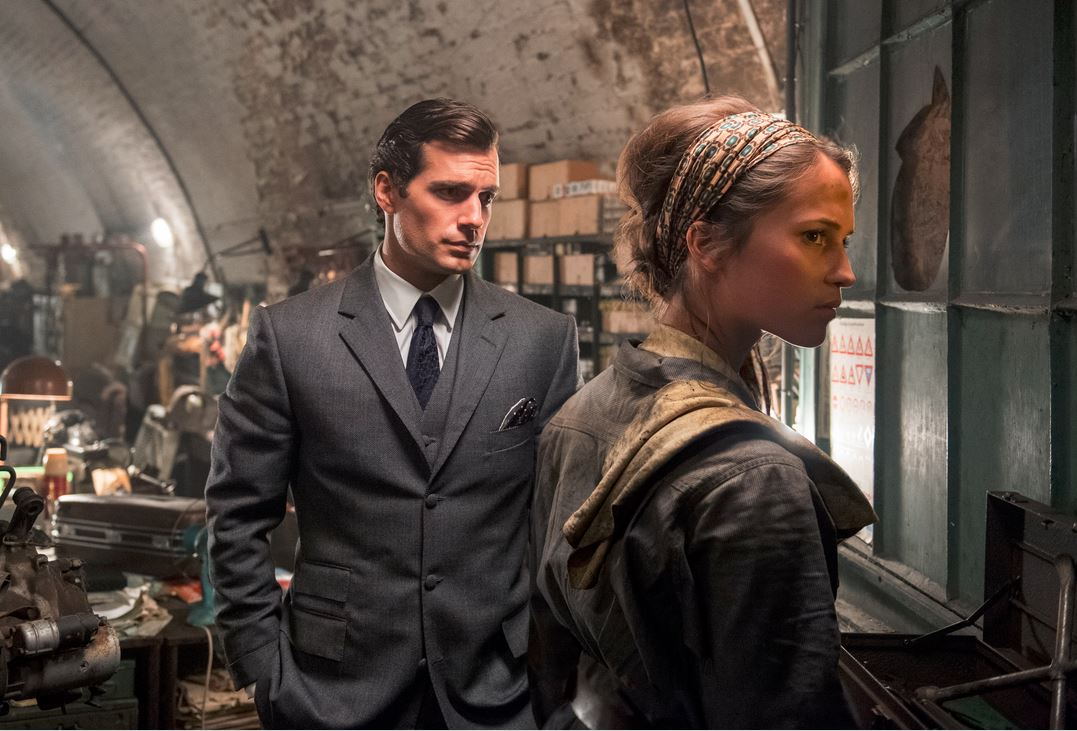 And then she quickly transforms into the Fashion Spy!! Check out this mini-dress in white and orange. She accessorizes it with a white handbag and cap and rust-colored shoes. The next scene has Alicia Vikander in this cute eggshell dress with a striped texture and matching early Fall overcoat. She pairs it with matching earrings and shoes. 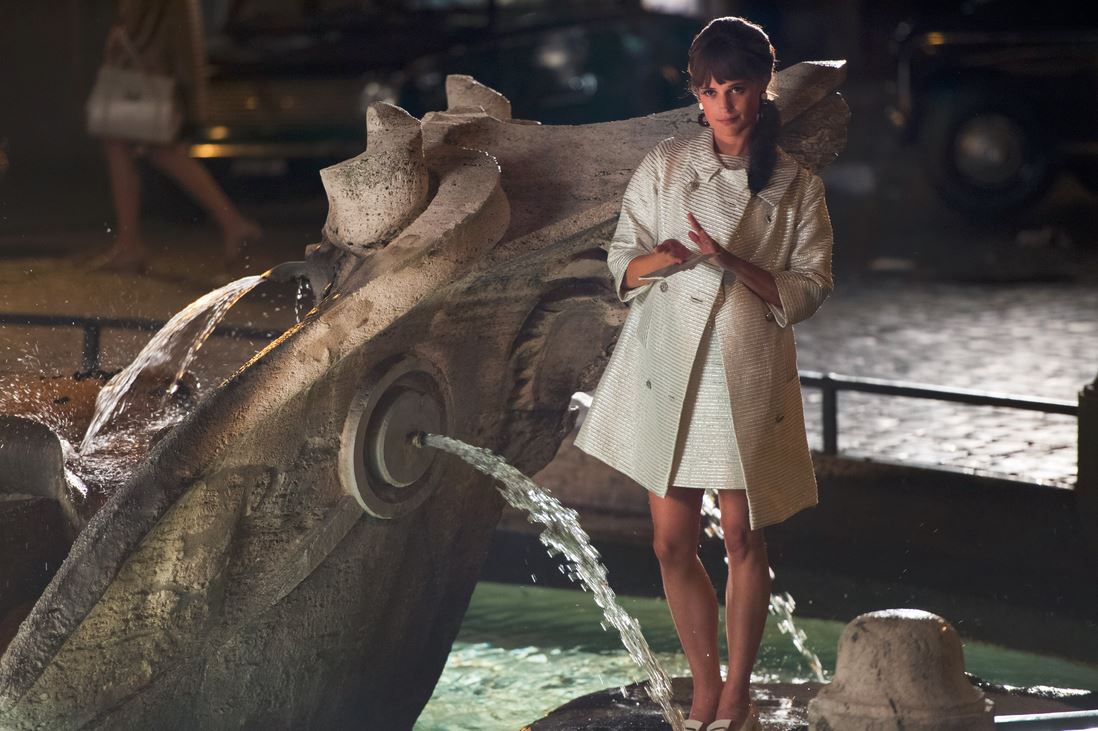 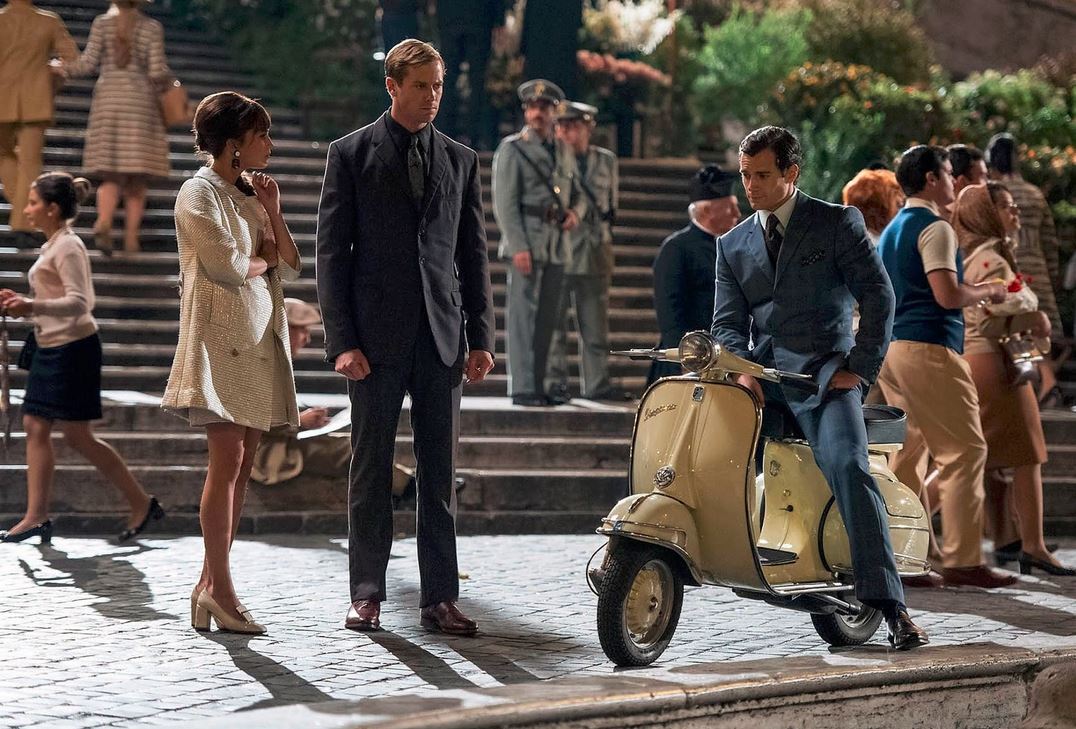 Check out the Man from Uncle hairstyles in this above image too – the men have gorgeous 70s hairstyles – all gentlemanly and Alicia Vikander has a poofy ponytail.

Here she wears a color-blocked dress in white and green with a white sun hat with multi-color earrings and a yellow ring and handbag. 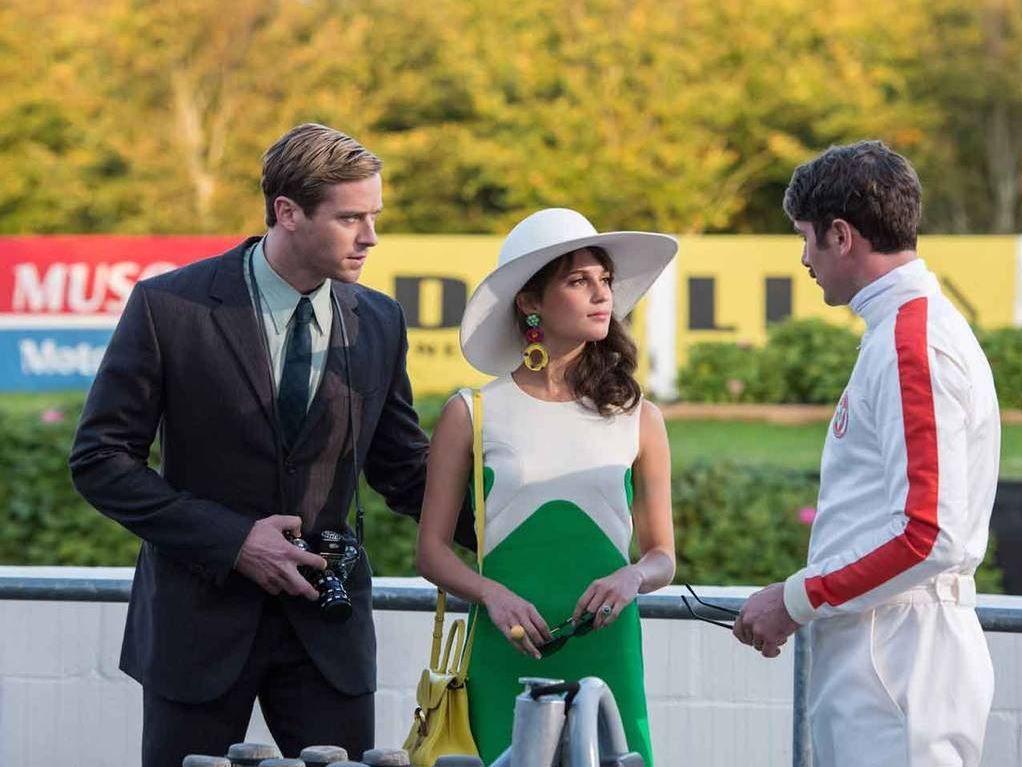 And she pairs it with a white overcoat too! I love this outfit! 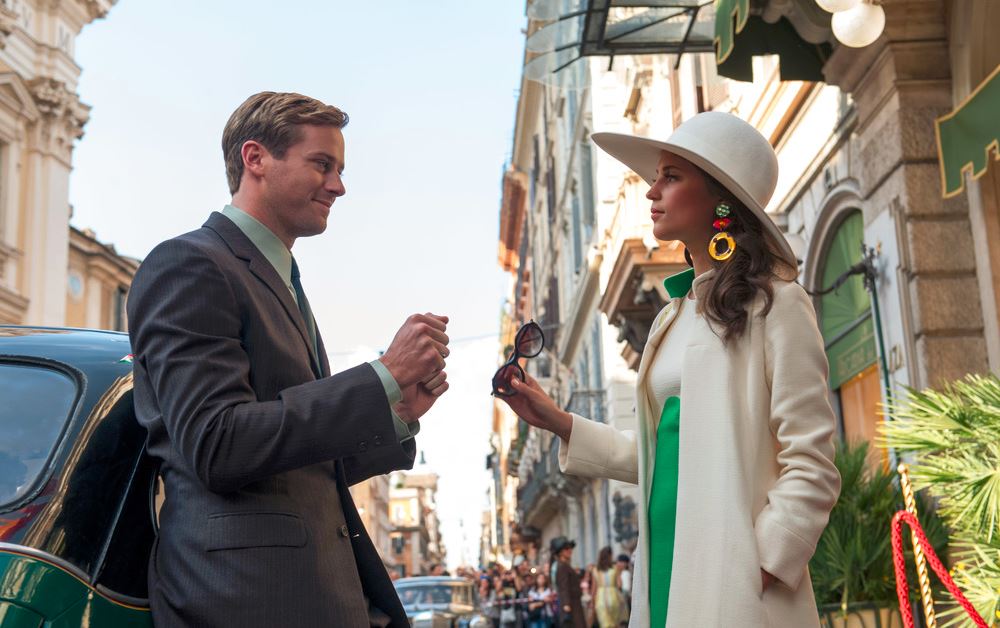 This helicopter scene has her wearing a backless print mini-dress in orange and white. Alicia Vikander pairs it with a brown handbag. 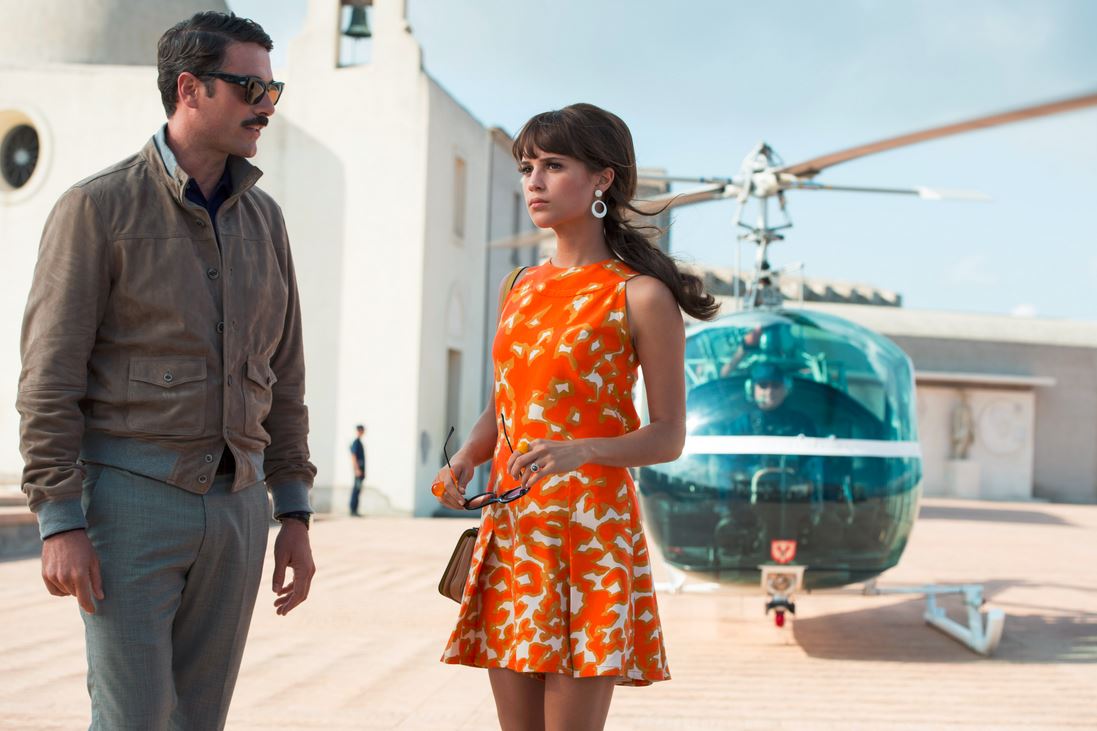 Check out her accessories that are matched to the dress – white earrings and an orange statement ring. Plus notice how she has a messiness about her hair and hardly wears makeup. A very natural easy-to-maintain throughout the day but elegant look. 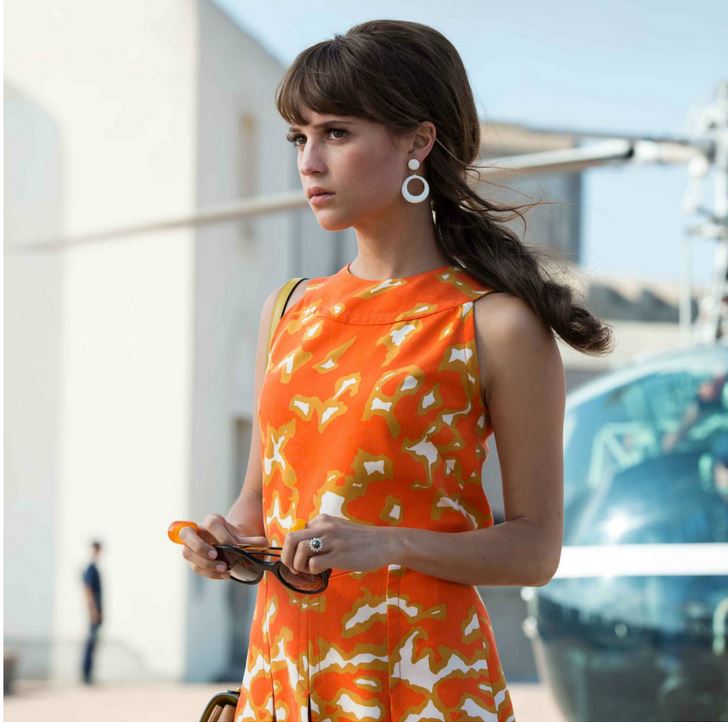 Here’s the climax scene in which Alicia wears a white mini-dress with silver stilettos and round sunglasses with a white frame. This is her real spy look! These sunglasses are really edgy and she kept the rest of the accessories undertoned. Check out her white earrings, red enamel ring and cuff wrist watch. 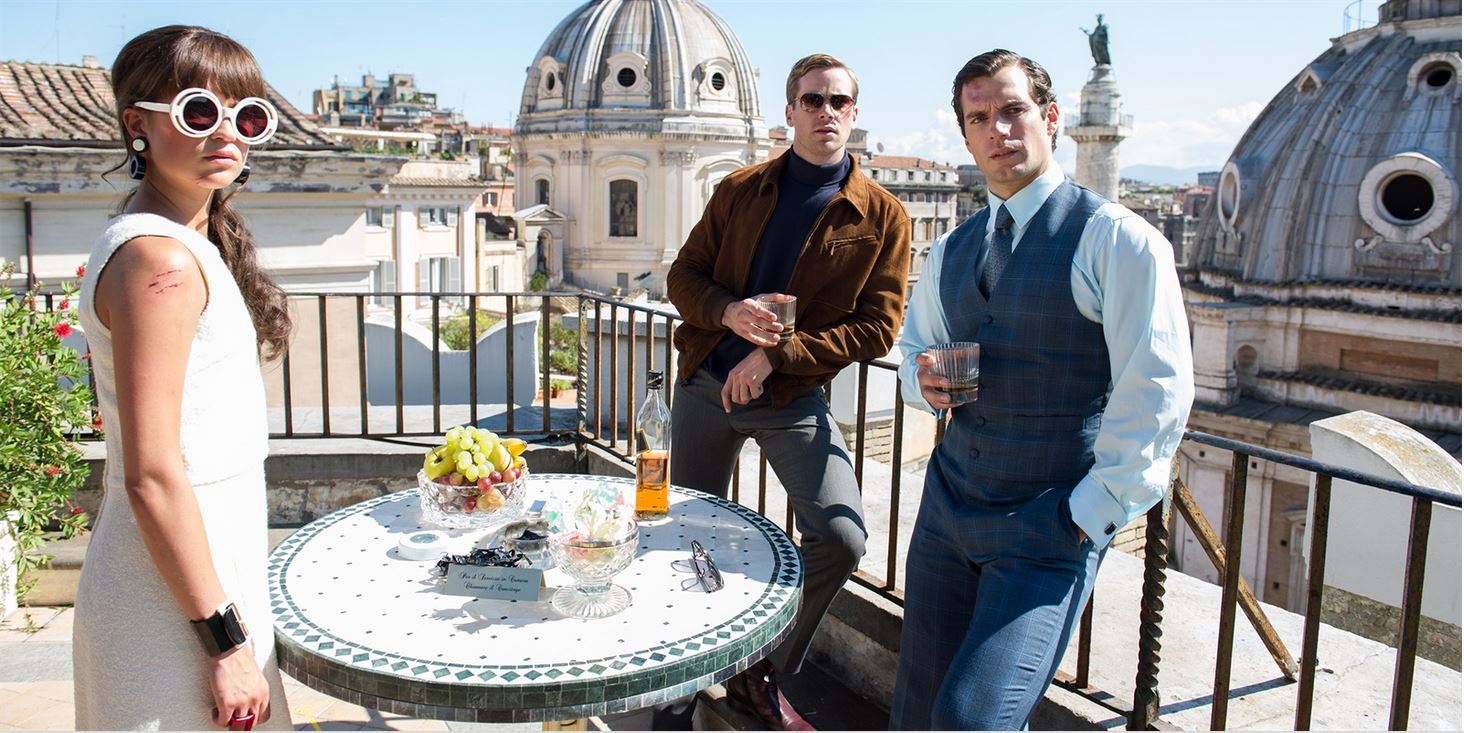 Elizabeth Debicki – The Best Looks from The Man From UNCLE

The femme fatale, Victoria Vinciguerra played by Elizabeth Debicki has style completely opposite of that of Gaby Teller (Alicia Vikander). Victoria wears lots of makeup highlighting her eyes. She has a sharp jawline and ties her hair into buns. Her hairstyle punctuates her sharp features.

Here’s her first outfit in the movie from a party scene. Even for a day outfit, it’s very dressy. Nearly all her outfits are in black and white, with loads of pearl jewelry and statement rings and earrings.

Here she wears a kaftan-like dress with embellished collar and arm-cuffs. Check out how she wears thick gold chains with her diamond earrings and rings like a boss!! In this scene, Elizabeth Debicki wears a black jumpsuit (or is it just trousers) with a sheer ruffle top and shimmery waistcoat-like top. 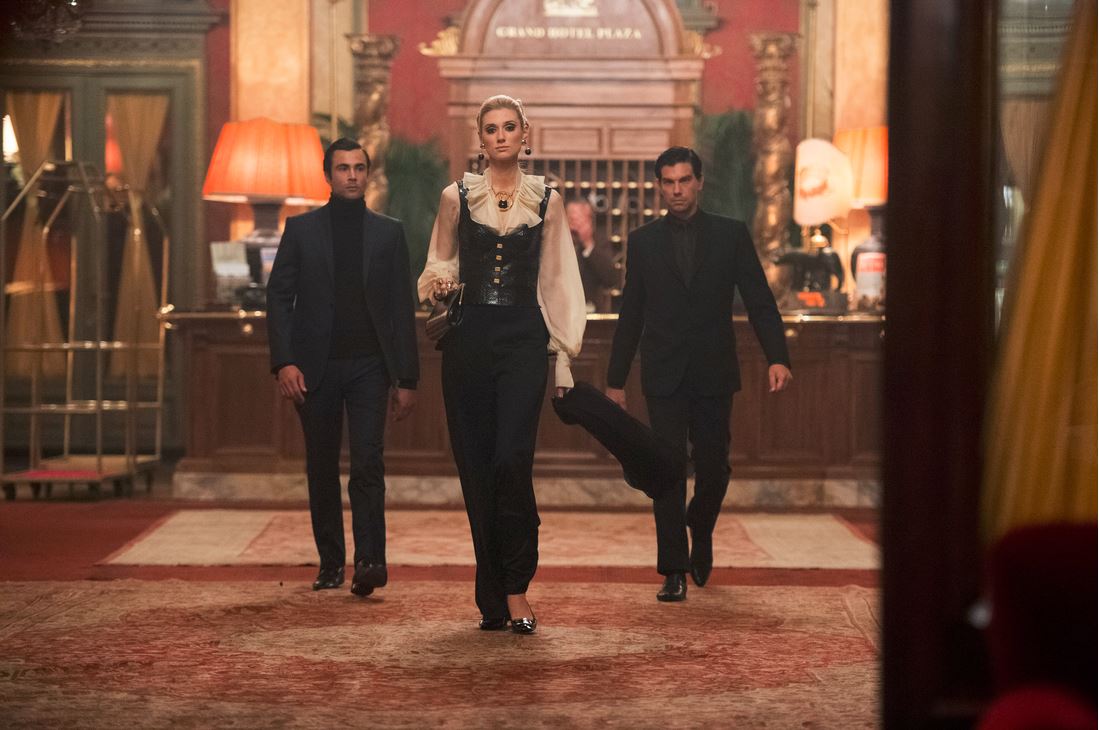 As she goes about her devious plan of sedating our spy, she lounges about in this vintage-like belted maxi dress with color-blocking design. 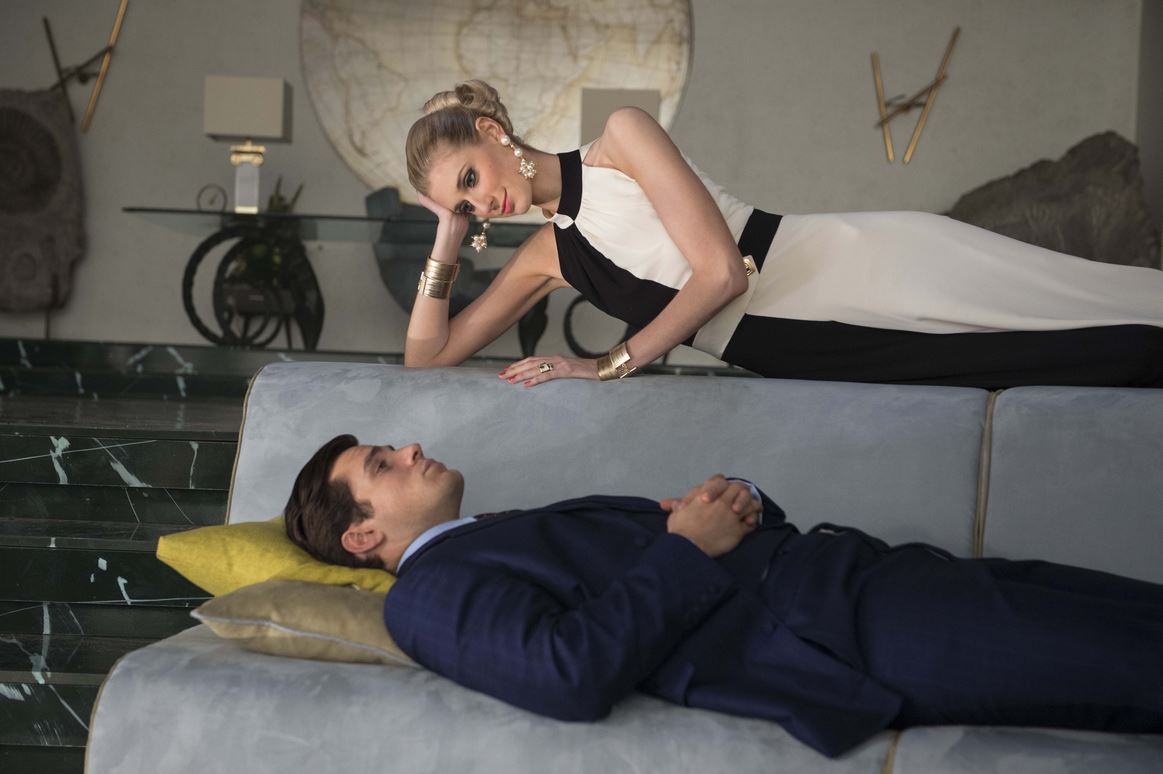 Does she ever have a hair out of place? 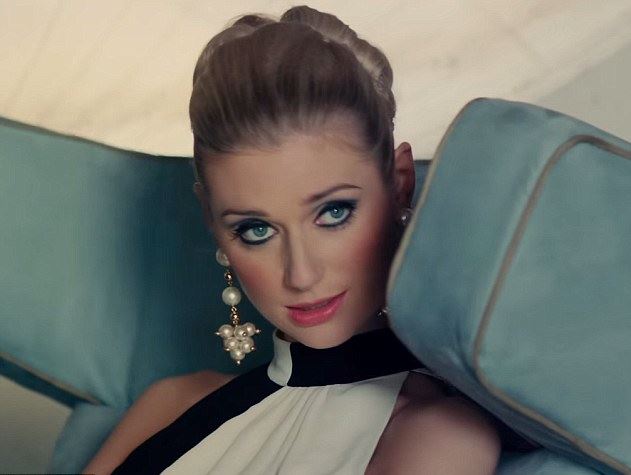 She pairs her black and white dress with her signature pearl bubble earrings and Greek-design gold cuffs. 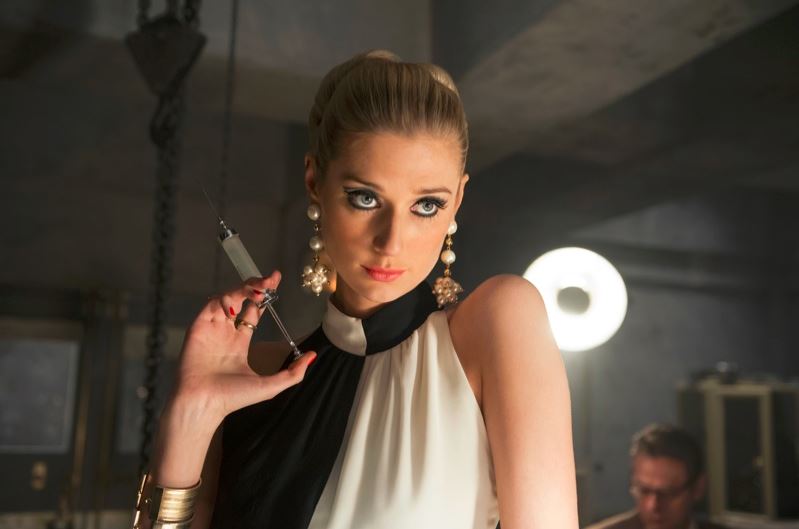 Yet another color-blocking dress, this time with cowl-neck. Elizabeth Debicki mixes up loose and well-fitted dresses like she can pull off anything! Just love it!! This is my favorite outfit of hers. It’s a belted overcoat-style dress thingie with slitted sleeves (her party dress also had slitted sleeves). Round sunglasses and a printed head-scarf. She pairs her solitaire and pearl rings with her gold Greek-style cuffs again. 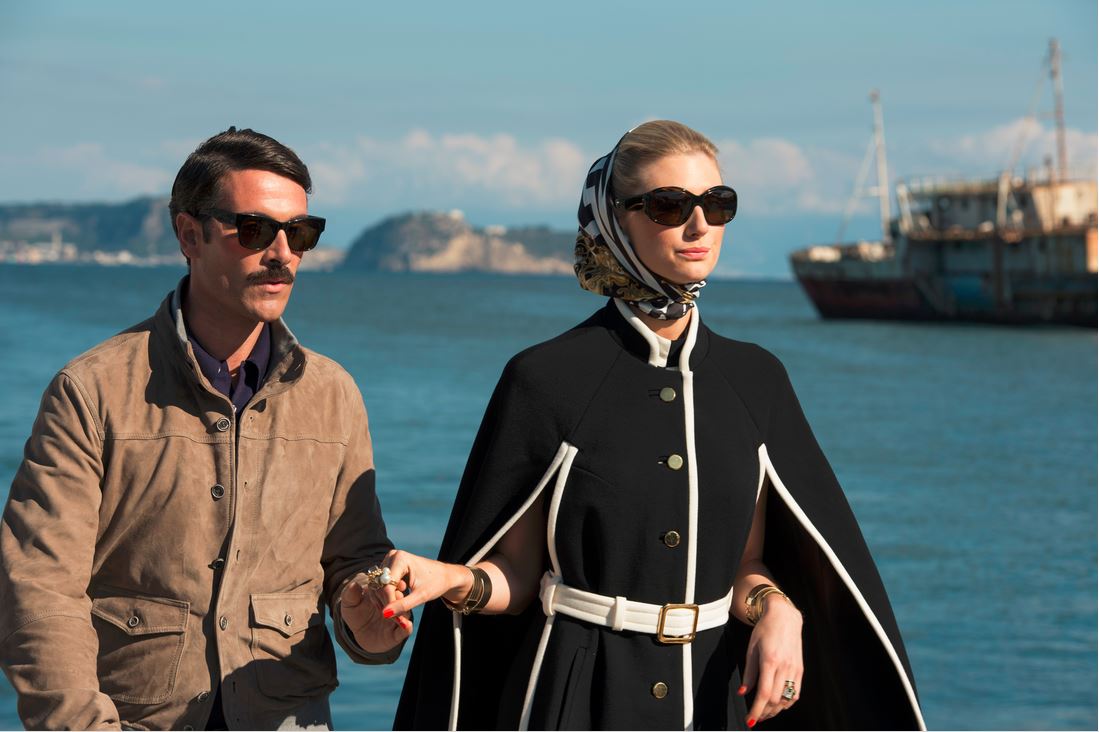 In this climax scene Elizabeth again pulls off an oversized dress with aplomb. It’s a grey trench coat, cinched at the waist with a broad belt. She pairs it with her head-scarf and a mix of gold and pearl accessories – watch, earrings and rings. And she wears the trenchcoat over a checked button-down shirt. Super cool outfit. 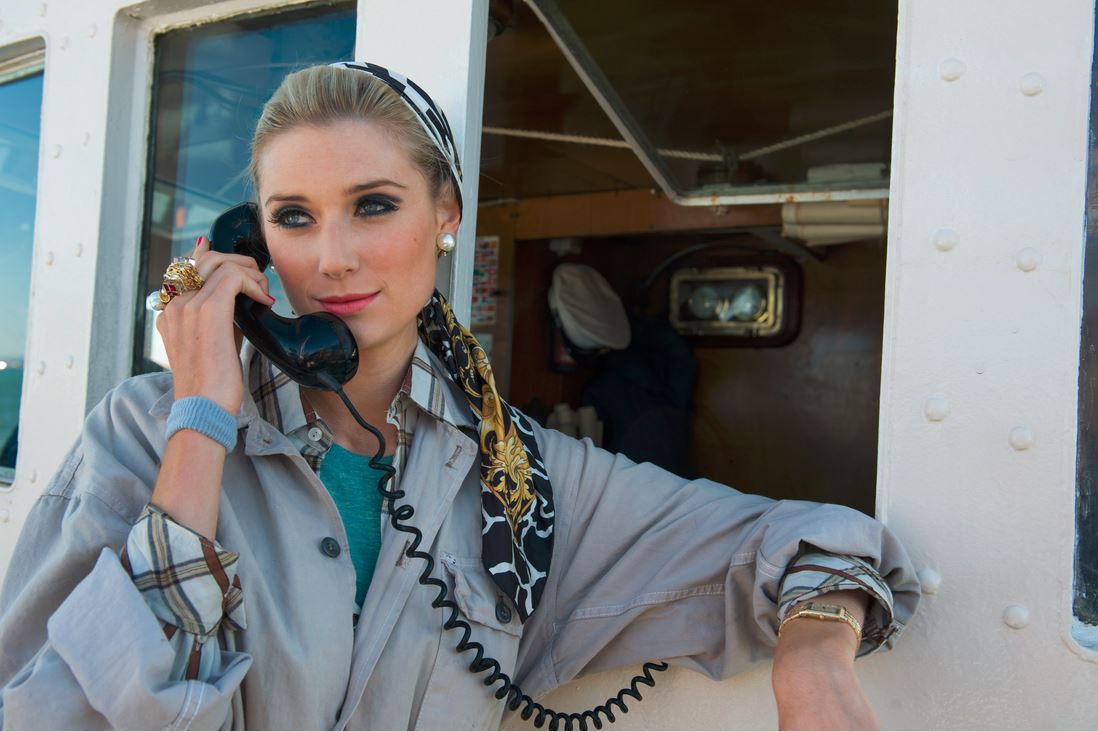 Did you love it as much as I did? Which is your favorite look out of these? Comment below! I’ll post about men’s fashion soon, so watch the men’s page for that!

Until then, here’s the official movie trailer of The Man from UNCLE!!