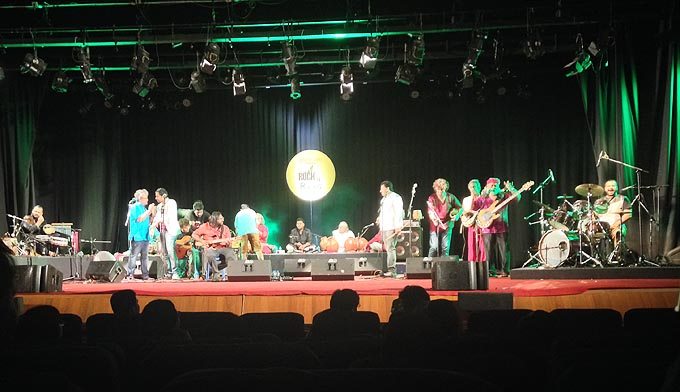 I recently went to a live concert called Rock n Raag that had Indian bands Arka and Indian Ocean playing fusion music. The bands may be more than a decade apart in their inception, but have some things in common – both perform with 5 band-members each, and both perform an experimental genre, a fusion of raaga, traditional Indian tunes, combined with western rock, guitars, drums, the works.

It was Guy who took me to this concert in Chennai. Guy – the handsome, the cultured – who wants to be credited duly – both for taking me there, and recording the below video of the finale!

The concert ended with a surprise where both bands, Arka and Indian Ocean, came together to play the hit and beloved number, Maa Rewa. It was improv for both bands, as Rahul Ram, Indian Ocean’s bass guitarist and vocalist said, “We don’t know what’s going to happen!” It was a great composition, brilliantly executed, featuring the track’s regular tunes, as well as impromptu solos by each band member.

Maa Rewa is originally a folk song played about River Narmada. The river is essentially is the physical boundary separating north and south India. Rewa is the old name for Narmada. It means “a new beginning” in Sanskrit, a very fitting name for this music genre, that is traditional at heart, but played in a modern, fusion way, the rock-way.

So enjoy the recording of this live number: