Hey! I wrote about Styling the Streets – The Chicest Public Art in the World earlier this week, where I wrote about the Love sculpture and the Marilyn Monroe sculpture, et al. Now I am writing sort of the part 2 of that, choosing more public art that not just chic, but related to fashion. The most fashionable public art in the world. One of the common themes in my selection is that I feel this art is either inspired by fashion or that it can inspire fashion! Regardless, I find them all very beautiful and elegant.

Chihuly’s work is made out of blown glass – a world of colorful, beautiful, abstract pieces that are put together harmoniously, reflecting subtle colors onto whatever can catch them – walls, ceilings, floors and the viewers.

Fewer public places have Chihuly’s exhibits than museums or parks, probably because they are delicate and also heavy. That’s why some of it doesn’t qualify as public art. I have seen his work at only two places – one, at the Bellagio hotel lobby in Las Vegas that has a persian blown glass ceiling artwork. Do check it out in my article Planning a Weekend Trip to Las Vegas | Last Minute Vacations. And the second time was at the Boston Museum of Fine Art that had Chihuly’s work’s exhibit. All of his work is characteristic, but I feel the ceiling is the most inspired, reflective and gorgeous. No wonder fashion designer Julie Danforth’s designs at the closing gala fashion show for Metropolitan Fashion Week 2013 were inspired by and held at Chihuly Garden and Glass, under the famed ceiling.

The Scaffolding of Lady Dior

Dior never fails to impress us with their clothes. Or bags. Or makeup. Or fashion shows. Or its decor. Or stores. Or scaffolding. Err, but yes, that’s what they did in 2010, when they made a hoarding to cover the store-front at East 57th Street, New York which was closed for renovation. However, instead of barricades or printed acrylic sheet coverings, they installed a giant Lady Dior bag as a hoarding, emulating Dior’s signature stitching pattern, handles and separate DIOR lettered logo. It may not be public art, funded by art funds to prominent artists, but it certainly styled the street. That’s why I think it is fair to include this in the list of the most fashionable public art. That’s some high fashion scaffolding for a high fashion city!

Yet another one from New York City, Sidewalk Catwalk was installed in the Garment District plazas near Times Square in 2010. For this public art exhibition, 30 mannequins adorned the sidewalk. 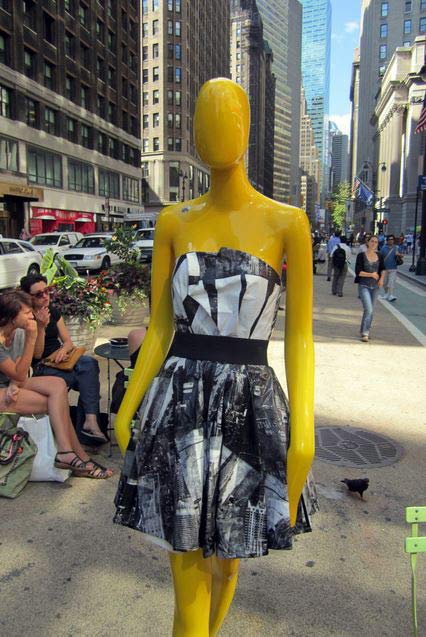 As far as fashionable public art goes, this is one of the few that technically fall under that category! All our favorite New York designers like Michael Kors, Tommy Hilfiger, Diane Von Furstenberg, Jason Wu and Donna Karan were given the task to customize or dress the mannequins to represent their signature style. 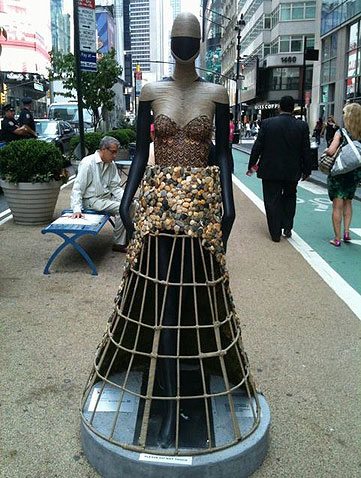 I guess it serves as a reminder of how strongly the culture of our world is influenced by fashion, a fact many, sadly ignore.

Field of Jeans by Catalytic Clothing

Catalytic Clothing is a project that aims to create air-purifying additives that attach to everyday clothing. To create awareness, they installed several exhibitions such as Field of Jeans which ran in several cities in 2011 and 2012. This one from Chelsea College of Art & Design, London. It had 40 pairs of catalysed denim jeans installed in the front yard of the college. The installation used donated denim jeans, to show the interrelation of fashion and technology, that when used by many people simultaneously can really make a difference. 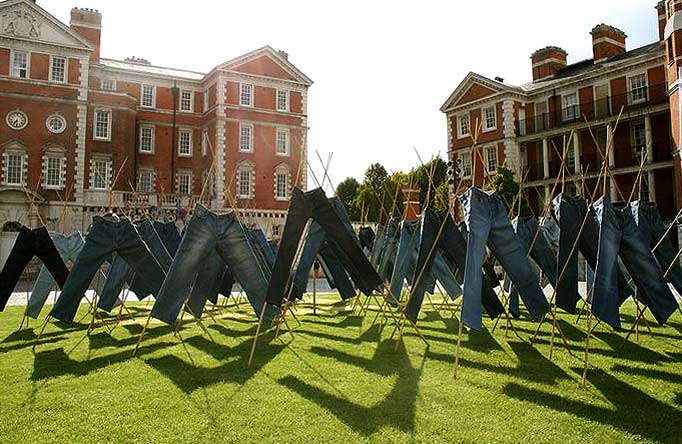 Shoes are towering replicas of high-heel pumps that have been displayed at several locations including the Château de Versailles in Paris. They are conspicuous, alright, but they look even more remarkable in this palace under the historic chandeliers and artsy ceiling, combining art and modern fashion with renaissance interior design. The interesting thing about the ‘Shoes’ is that they are made entirely of stainless steel pots, pans and lids. They symbolize the traditional roles of gender bias (women working in the kitchen) that have not left the society even in the modern times. And that’s why their being in this historic landmark is very strangely fitting.