We’re waiting for Riverdale Season 2 Episode 4 and there’s sooo much we wanna know about the popular TV show. Here’s what to expect and our fan theories! 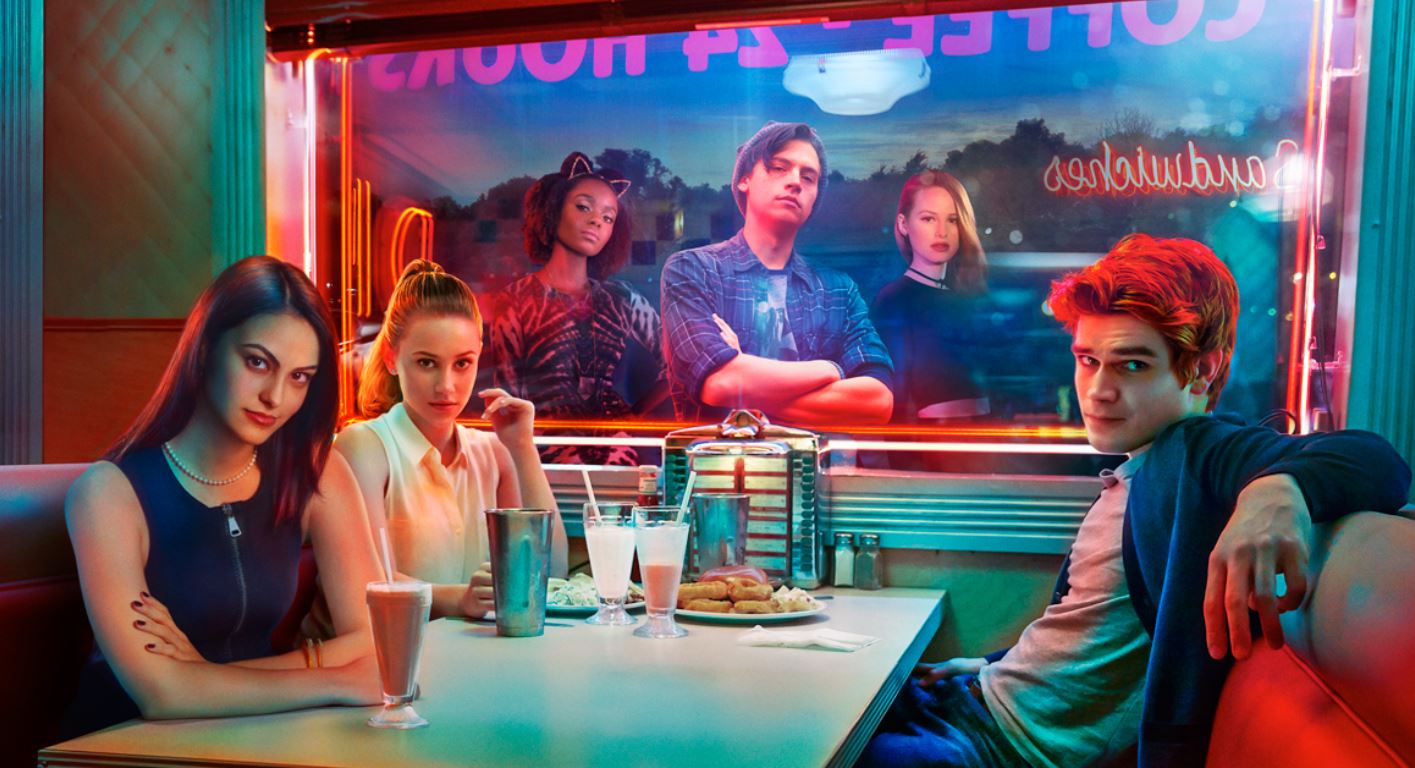 Based on the characters of Archie comics, Riverdale TV series started in Jan 2017 with a lot of hype and a lot less love. But as the first season progressed and ended, the show became hugely popular. It became the center of attention over the summer, especially on Netflix. And now that Season 2 has started airing on CW, we are all hooked, devouring each new episode that leaves us wanting more!

Warning: Huge spoilers ahead from Season 2 Episode 3. If you haven’t watched till this episode, go catch up before reading or be forever spoiled! You have been warned!!

With Archie becoming angsty and leader-like in the last episode, Jughead meeting pink-haired Southside Serpent Toni Topaz, Hiram Lodge out of jail and getting creepier by the day, the show already has so many plot twists and new things to expect and speculate over. And all these new developments leave so many questions unanswered, both from next week’s episode and Season 2 in general. So I’m speaking for the whole Riverdale audience community when I ask these. Before we start, here’s the promo of Riverdale Season 2 Episode 4, The Town That Dreaded Sundown:

Riverdale Season 2 Episode 4: What to Expect and the Unanswered Questions

1. Can Cole Sprouse get any hotter?

Wait. Before I start the plot-related questions. Lemme just ask this one. What’s with Jughead being so cute? His face is everything. You wanna protect him. And his front piece of hair has everyone possessed. And he’s not even doing anymore weird “I’m weird. I’m a weirdo” lines. Stop being so cute, Cole. It’s not fair to be that enchanting. Also, there’s something so attractive about an introverted writer who’s forced to be a ‘bad boy’! 2. When will we be introduced to Betty’s brother? And Dark Betty?

Lili Reinhart revealed in an interview that Dark Betty is just waiting to resurface in Riverdale Season 2. We’ve also heard that Hart Denton has been cast to play Chic Cooper, Betty’s estranged brother. But we haven’t met him yet. And I believe the later in the season we get introduced to him, the more the chances are that he may have something to do with the attacks in Riverdale. Which brings us to the big question… 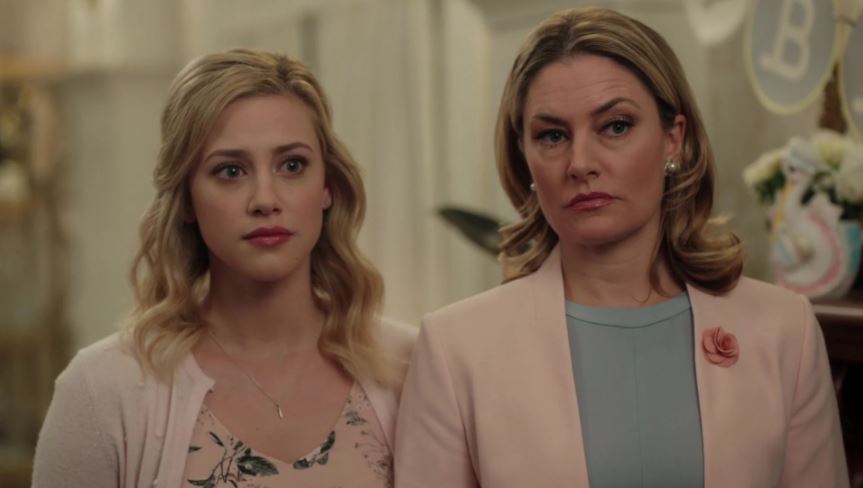 3. Is the shooter someone we know?

Like, within the existing cast? Or is it gonna be a new character? Based on Season 1’s big reveal of Jason’s murderer being his own dad, we can expect the former. Who shot Fred Andrews is the biggest question on Riverdale Season 2, but Episode 4 may just reveal if the shooter’s someone we know. We know from the extended promo that Betty receives a cryptic letter and declares, “He’s doing it for me!” Does this have something to do with her brother or the killer? Or both? Fans already suspect her brother Chic or her father who has green eyes to be the Black Hood. But if not, other ideas we have are the Lodge parents, Cheryl’s mom, Southside serpents or Sheriff Keller himself. 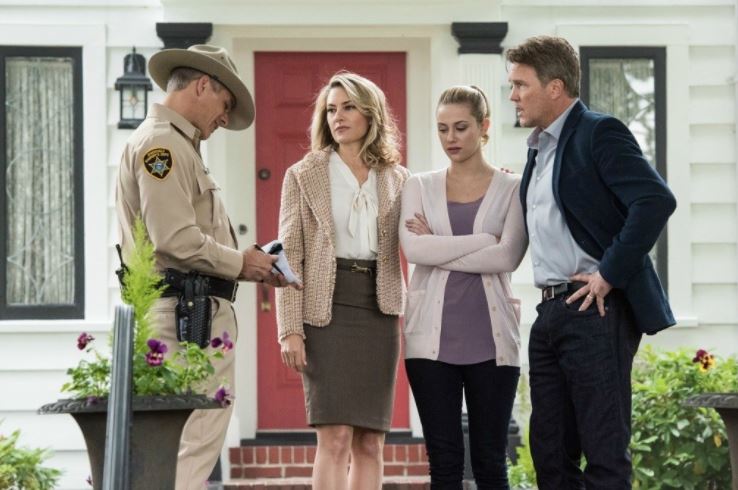 Here’s another big question Bughead shippers need the answer to. Jughead has already joined Southside High. Riverdale Season 2 Episode 3 had him not only meet the much talked about character, Toni Topaz, but also hang with Serpent kids. She seems fun and an obvious threat to Bughead. Lili Reinhart has teased that Riverdale’s rift between the north and south sides may be trouble for the relationship. Will they survive? Please say something! I can’t wait for a whole week to find out!!

When you have to wait a whole week to find out what happens. Thanks for watching! Check out #Dynasty, next on The CW! #Riverdale pic.twitter.com/vKNyqmSbRA 5. Who’ll the shooter target next?

This is the next big question for Riverdale Season 2X04. We were all scared for Ethel in the latest episode and she thankfully came out unscathed. But if the ‘Angel of Death’ or ‘Black Hood’ is targeting the sinners of Riverdale, (s)he could go after Polly, the self-proclaimed “poster child for sin”, Veronica’s mom, FP Jones, Alice Cooper (she’s officially terrified in the Season 4 promo).

Everyone so far, Ms. Grundy being the happy exception, have miraculously managed to survive the shooter’s attacks. Even when we didn’t expect them to. Which is strange. But we know that’s probably not for long. Will someone die again in Riverdale Season 2? Who will it be? Since all the main and side characters are comic book ones, the show needs them in future seasons. So let’s see who it can really kill off. Who’s indispensable?

Hiram Lodge is handsome, creepy, powerful and knows how to scare everyone with just a tilt of his head (see the gif in the tweet above)! What’s he been upto since his return from jail? Definitely something sinister. Why did he buy Pop’s? Why is he trying to manipulate Archie to go after Black Hood and why did he commission an artist to make that haunting painting of Veronica hanging in his study over the fireplace? Maybe just for effect.

8. Why is Veronica’s mom scared of Hiram? 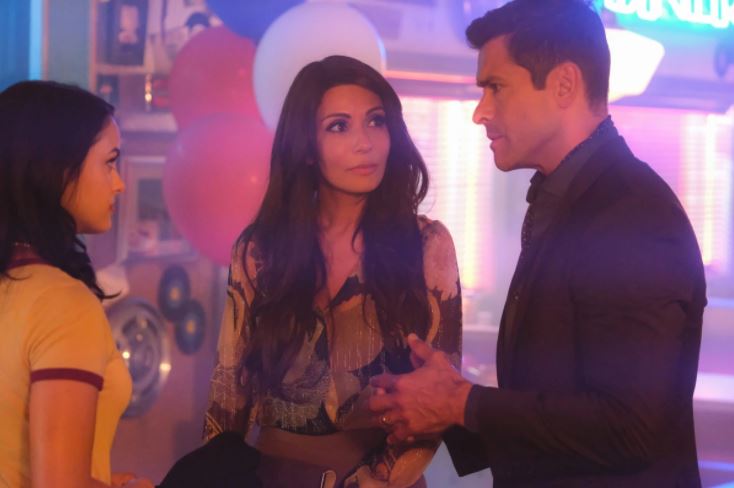 What does he have on Hermoine Lodge? She seemed downright scared while trying to dissuade Veronica from inviting Archie over for dinner. Is she worried he’ll find out about his past with Fred? Or is there something scarier brewing between the Lodge parents?

9. Is the Red Circle in Trouble?

Archie’s gang of cute vigilantes may be getting into trouble after releasing their bold video coming at Black Hood. Here’s a promo image for the next episode… 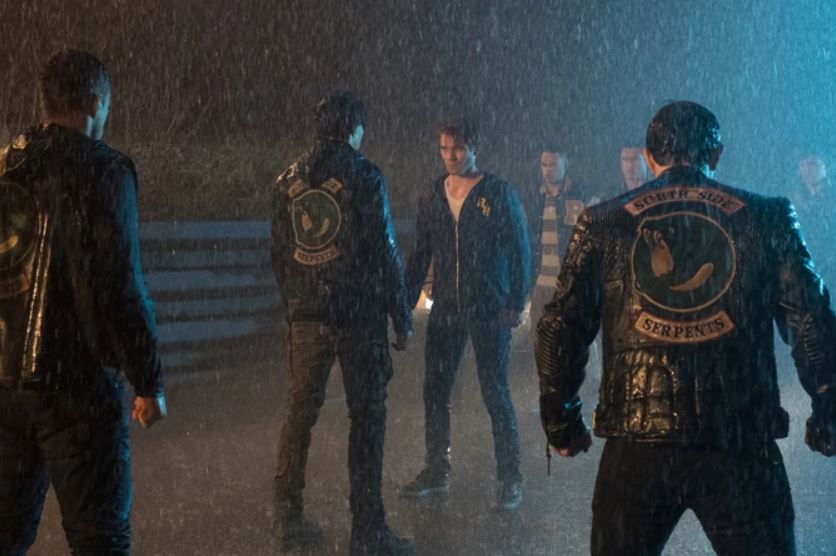 10. Will Kevin find a love interest?

It was great to see Kevin come out of the sidelines and find a storyline of his own, and even express his dating woes as an openly gay character. Will he finally find a love interest? Will Joaquin come back to Riverdale or will he find a good guy? Maybe he can date Moose. The two definitely had a thing in the hospital scene.

11. Why is FP Jones so scared of Serpents’ lawyer?

Penny Peabody was introduced as a downright shady character. I didn’t like her. And FP warned Jughead to never meet her again or take her calls, even. What’s going on there? I wanna know!! 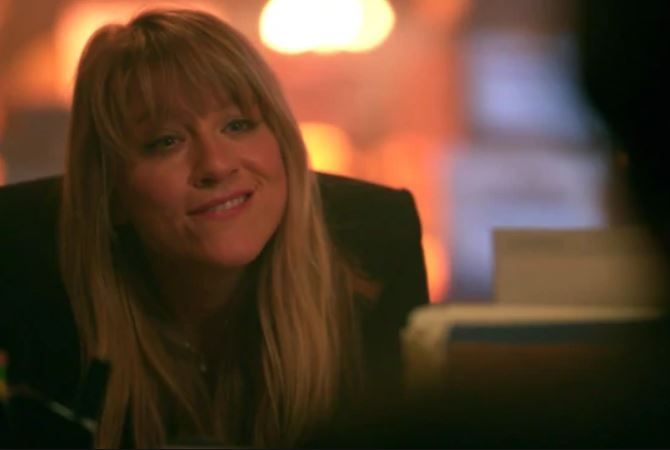 12. Where did Archie’s mom disappear to after her creepy wink?

All the parents on Riverdale are so secretive and weird.

13. What happened to Grandma Blossom in the Thornhill fire?

Am I the only one thinking this? Our SlubTeammate Nishita reckons she’s dead.

14. Will Riverdale Season 2 have some supernatural side-storyline?

Pretty Little Liars went briefly in that direction upon the return of Caleb from Ravenswood. Thankfully Riverdale has not ventured into the paranormal territory so far. But it’s rumored that Sabrina the teenage witch is coming to town, and I think she may be involved with helping the town get rid of evil spirits.

News has been out that Veronica’s ex-boyfriend is coming to town and rumors are that he’s a bad boy. Will that mean trouble for Varchie? My theory is that Varchie and Bughead will both breakup at one point or the other and then Barchie and Vughead (I know!!) will become a thing in Seasons 3, 4 and possibly 5 before coming back in the final season, whenever that is. I know! I hate to think about their breakup too!!

16. What’s Jingle Jangle got to do with all this?

The drug also known as JJ in Southside High has been featured far too often in Riverdale Season 2. It is definitely at the midst of some big thing, just like drug business was behind the Blossom’s maple syrup thing last season. Hmm…. what could it be?

Trying to figure out what, exactly, is jingle jangle… #Riverdale pic.twitter.com/y5JzCyY4Do

So far he’s been zombified in the frozen Sweetwater River, adorned every nightmare ever on Riverdale, and even attended Archie and Veronica’s wedding in Fred Andrew’s dreams. All without revealing his voice.

So guys, these are the 17 questions we all are looking answers to. What did I miss? Are you a Bughead or Varchie shipper? And what are your thoughts and expectations from Riverdale Season 2 Episode 4? Tweet @shilpa1ahuja! Enjoying Riverdale? Also check out our list of other shows to watch: 13 Best Girly TV Series You Need to be Watching Now!