Bollywood actress Priyanka Chopra got married to Nick Jonas, and we’ve put together a collection of the best pics, all wedding looks and cutest moments from their wedding. Check out the best Nick-Priyanka Chopra wedding pics! Priyanka Chopra just got married, and I, for one, am very happy! And why not, I get to check out some of the most iconic wedding fashion when celebrities get married.  The #nickyanka hashtag has been trending on Twitter for days now, and new pictures have been popping up left, right and center on Instagram! Indian Prime Minister, Nadendra Modi, himself graced the occasion with his presence!

I’ve grown up watching Priyanka Chopra competing in the beauty pageant, and becoming Miss Indian-World. And I grew up watching her rise to fame as a Bollywood actress. So it’s quite interesting to me to watch her journey into the married life. 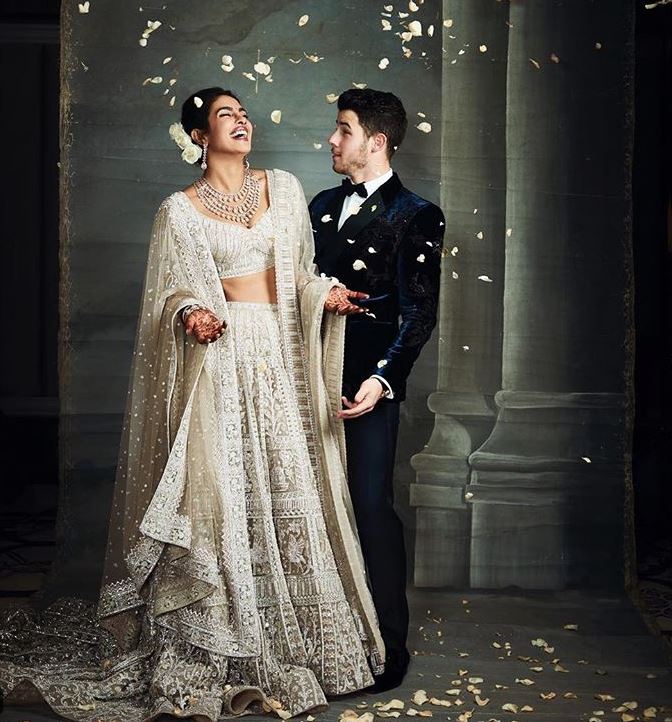 So I think it’s high time I shared some of the best moments of the Priyanka Chopra- Nick Jonas wedding with you all. Just in time, as the popular Indian-actress-turned-Hollywood girl has changed her name on social media to “Priyanka Chopra Jonas”. 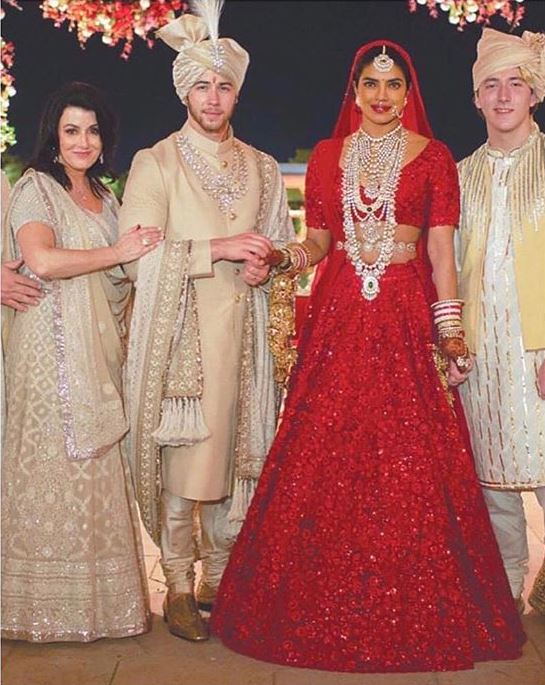 Priyanka wore a colorful anarkali-gown-ish thing in yellow and pink, with her hair tied into a floral bun. Nick Jonas shared some of these pics on his Insta captioning them an “amalgamation of cultures.” He wore an ivory-colored kurta for the occasion. 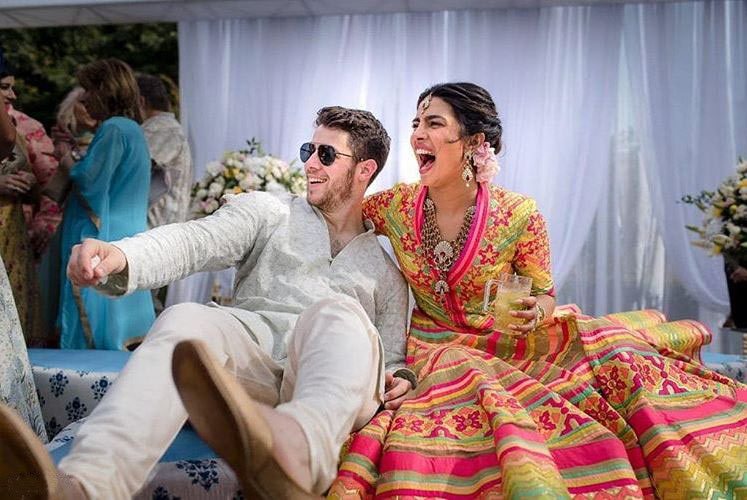 Honestly, their sangeet setting looked to me like the set of a reality show. And this picture in particular reminded me of the Indian reality TV show moments… oops! 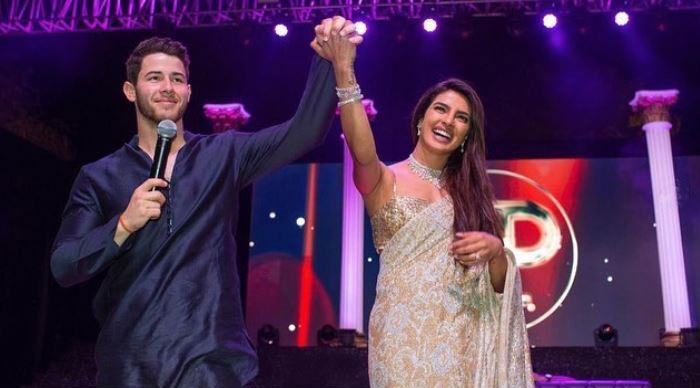 Anyway, the couple reported that their families put up a great show with dance performances. “Priyanka and I had been looking forward to the Sangeet (the musical evening and a pre-wedding ritual) to see what each side of the family had put together,” Nick mentioned on his Insta pic caption. The couple had two weddings. The Christian wedding had the dreamy looking bride wearing a white lace gown with the longest veil you’ve ever seen. 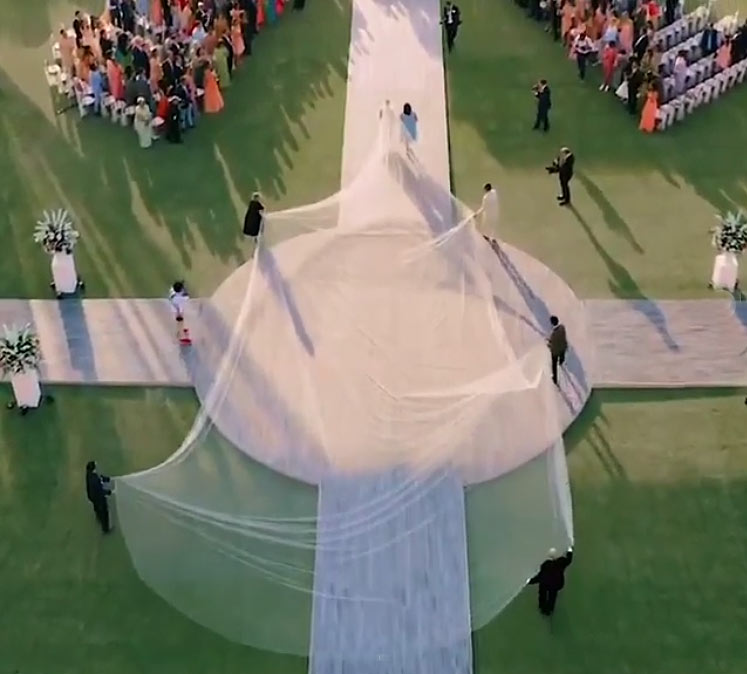 If this is not a royal wedding in India, I don’t know what is! Here are a couple more stills from the Nick Jonas- Priyanka Chopra wedding video. The bride’s mother walks her down the aisle. 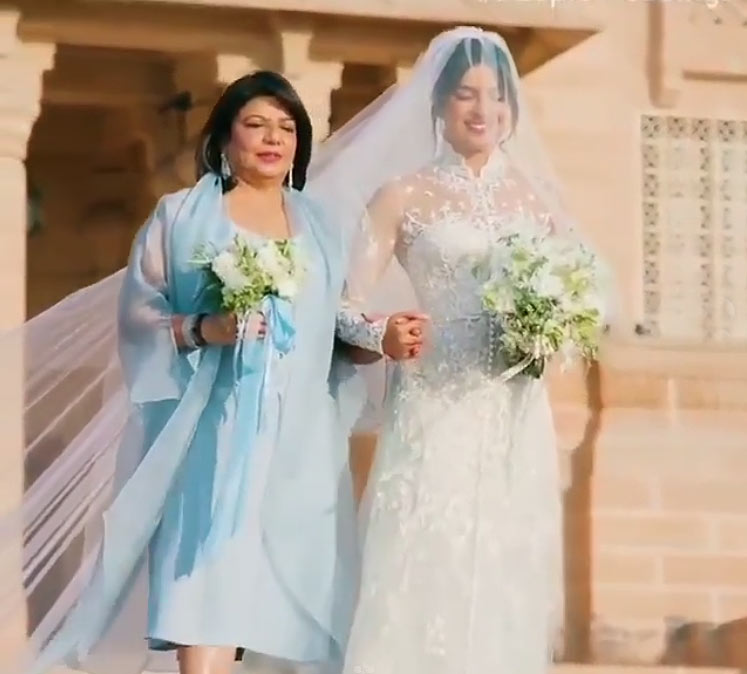 And here’s the married couple! The picture looks straight out of a wedding magazine. The Guy is right – a lot of the celebrities’ lives becomes for the camera rather than for themselves. 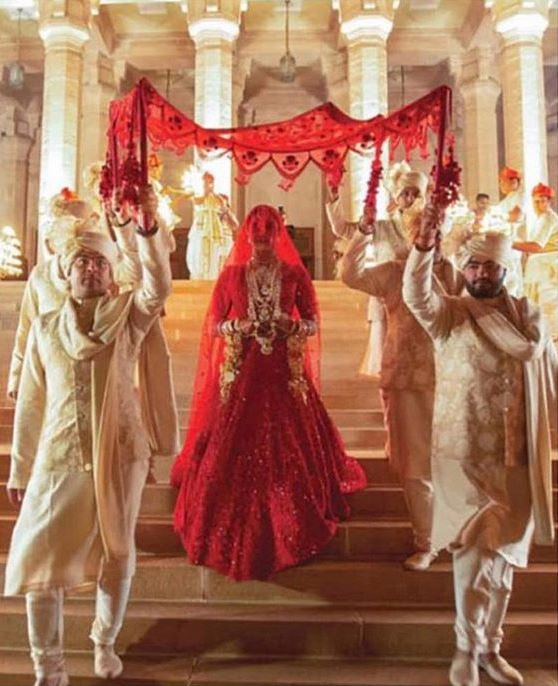 The designer called it the “Kanauj-Rose Lehenga,” and said it was neo-traditional, that married global traditions with Indian heritage. He also mentioned that he worked with the actress to create a bridal classic for the Priyanka Chopra wedding. The bridal dress was studded with crystals and floral applique that were made with red threadwork.

Here are some more moments from the Priyanka Chopra wedding – jaimala and wedding reception. 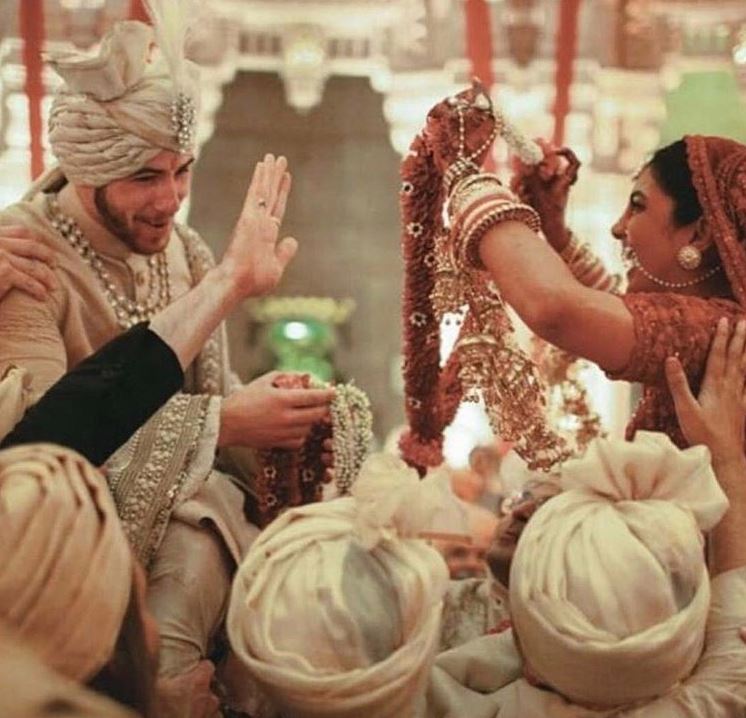 The wedding reception was held in Delhi on December 4, 2018. The bride wore a lehenga by Falguni Shane Peacock. According to the designers, the reception lehenga in frosted nude color was custom-made and took 12,000 hours to make with 80 craftsmen who studded it with a million crystals. It had botanical motifs and depicted Indian cultural folklore. 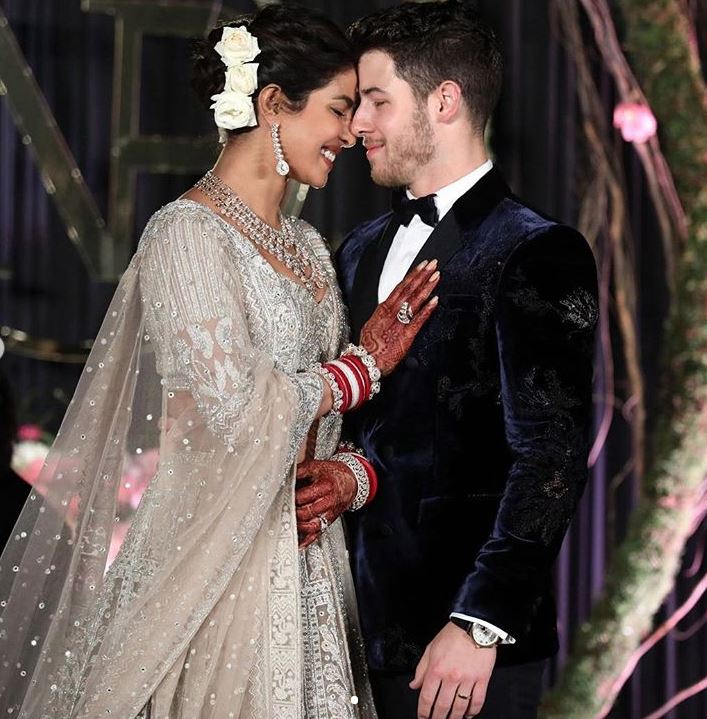 The necklace looks good, though. So does Nick’s velvet jacket. Also, I did a poll on Twitter asking you all to vote on which celeb couple you thought was better dressed out of Nickyanka, DeepVeer & Virushka. And most of you (75% – an overwhelming majority) thought that DeepVeer were the best dressed couple at their wedding. What do you think after watching all these pics – would you change your mind?

So what did you think of the groom’s and bridal attire? And what were your favorite moments from Priyanka Chopra wedding? Lemme know below!