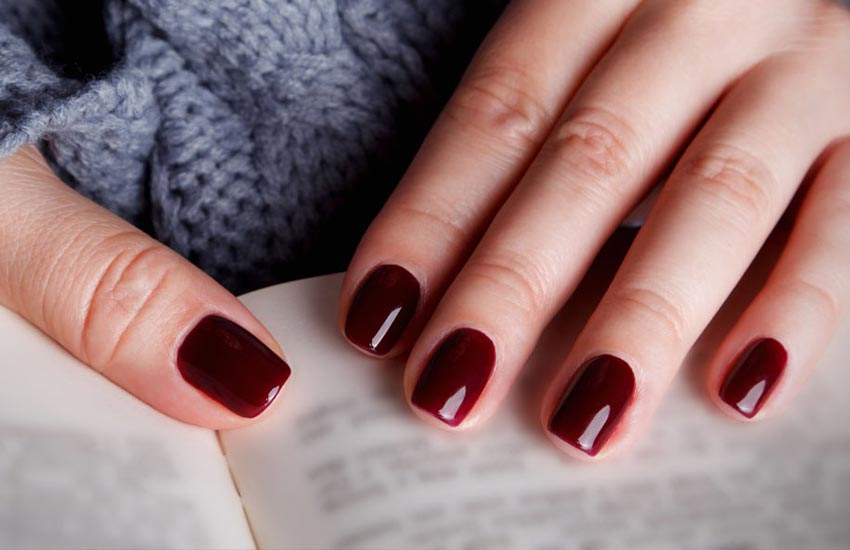 Read all about the latest nail shapes, nail art, trends and terminologies right here in our SlubWords fashion dictionary.

Almond nails (N.) [al-muhnd] Almond nails are similar to oval nail shapes but they get narrower at the tip and end in a pointy curve.

Arrowhead (N.) [ar-oh-hed] Also called arrow nails, arrowhead nail shapes are quite literally shaped like the head of an arrow. Unlike stiletto nails, they are angular and not curved at the sides. Refer to nail shape chart.

Ballerina (N.) [bal-uh–ree-nuh] Ballerina nail shapes are called so because they resemble a ballerina’s shoe. These nail shapes taper toward the end and have a flat tip. Also coffin nails.

Base coat (N.) [beys koht] Clear nail polish that is applied before painting the nails is called base coat. It serves as a base for the nail polish and also protects the nails. Also see top coat.

Edge (N.) [ej] Three-dimensional nails that are pointed and have a ridge-like spine down the center are called edge nails.

French manicure (N.) [french man-i-kyoo r] A type of manicure where the tips of the nails are filed into a square and painted white.

Gel nails (N.) [jel neyls] A glossy nail trend where the nail polish has a wet look even after it dries and lasts much longer than regular nail polish.

Half moon (N.) [hahf moon] A type of nail art where a half moon shape is painted in a different color at the bottom of the nail bed.

Lipstick nails (N.) [lip-stik] Lipstick nails are an asymmetric nail shape, which resemble lipsticks and their edges are typically sharp.

Magnetic nail polish (N.) [mag-net-ik] A type of nail polish that contains iron shavings, which form pretty patterns when a magnet is held above it.

Mountain peak (N.) [moun-tn peek] Nails that are not as sharp as stiletto nails and yet not as rounded as almond nails are referred to as mountain peak nails.

Oval (N.) [oh-vuhl ] Oval nail shapes are similar to round nails but their corners are curved instead of being straight.

Press on (N.) [pres on] Fake nails that can be glued or pressed on to natural nails are called press on nails.

Pierced nails (N.) [peerst neyls] A nail art trend done on acrylics by hanging charms from a pierced hole in the nail.

Reverse French manicure (N.) [ri-vurs french man-i-kyoor] An upside down version of the french manicure where the end at the nail bed is painted in a different color instead of the tip. Unlike half moon nail art, reverse french manicure follows the natural shape at the base of the nail.

Round (N.) [round] Round nail shapes are straight at the corners and follow the natural curve of the nail at the tip.

Solar (N.) [soh-ler] Also called pinks and whites, solar nails are done directly on the nails instead of using fake extensions with the help of solar nail powder. Typically, the nail bed is pink and the tip is white.

Squoval (N.) [squoh-vuhl] A mash-up of square and oval nails are known as squoval nails. Their edges are rounded.

Top coat (N.) [top koht] Similar to the base coat, top coat is applied once the nails have been painted to prevent them from chipping and make them last longer. Also see base coat.