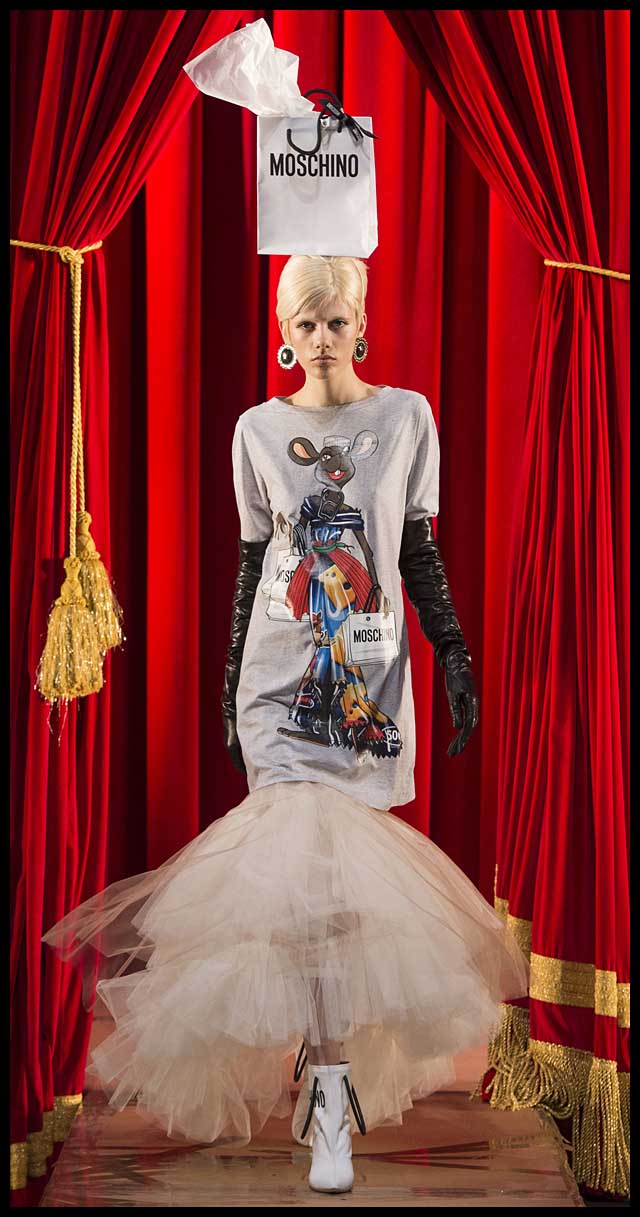 When Jeremy Scott brings it on, it usually becomes one of the most memorable shows in fashion week. And this time, he didn’t fail to impress. Again. The problem with watching a Moschino fashion show is that it ups your expectations, which the other shows can’t keep. But that’s how creativity is supposed to be.

For Moschino Fall/ Winter 2017 Ready-to-Wear collection, Moschino played with the sewer rat theme in their Rat-a-Porter show. Yuck, you may think, but Moschino even made trash and used cardboard look chic. The runway was lined with taped cardboard, under a backdrop of red velvet curtain.

The first half of the show consisted of graphic t-shirts, dresses, long gloves, and skirts. Used cardboard pattern was used on many hats and dresses, with its tape and words like “This side up” or “fragile”, and also made the print of sunglasses’ frames. Large earrings, especially square ones with the letter M cut-out into them made a statement. The rat theme played into the show’s color palette of greys, browns and black. Asymmetric coats and trench coats were also seen. 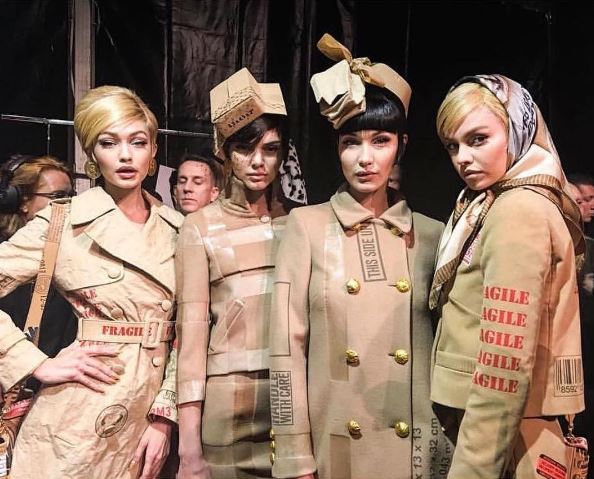 Here’s an image from the fashion show campaign: What also made the looks that used a dull color palette and used cardboard patterns seem chic was the retro makeup and hair. Winged eyeliner, nude lips and poofy hairstyle with side-combed fringes, sometimes paired with vintage-style head-scarves. Other accessories included broad belts, nude heels, chokers, necklaces and gold earrings on some looks. 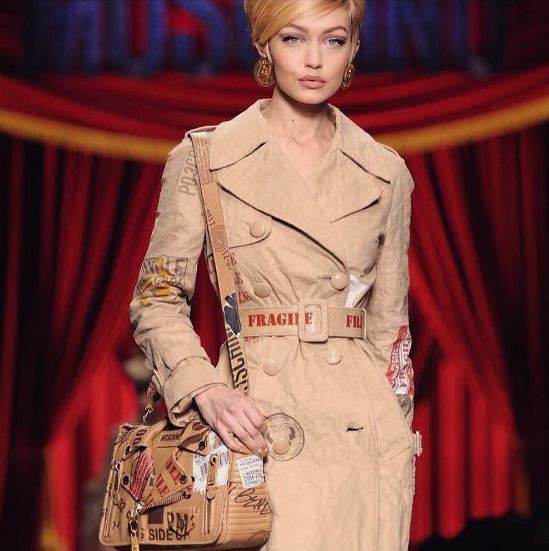 The show got fast-paced from there with the advent of colorful print dresses and coats, Moschino and Katy Perry style, and leather skirts and dresses. Long sleeved tops and pants came too, printed with bright graphics and texts, and paired with long gloves.

The second part of the show started with a breath-stopper! A model clad in a red curtain dress, replete with gold fringes posed on the runway, and then pulled on to her long scarf, which came out as the curtain that had until now made the runway’s backdrop! A real photo-moment! The looks that followed included white dresses with a taped paper appearance, dry-clean bag dresses with the message “We <3 our customers”. After last year’s washing powder dresses, I’m surprised the dryclean bag dresses hadn’t made it into one of Moschino’s collections until now!

Hats got super creative – we saw a bicycle tire hat, manhole lid hats, a candle-holder hat and even a mop hat. Some totally unwearable of course, but then Moschino intends to make every piece a statement wear. Silver net dreses, “trash-embellished” dresses, bathroom curtain and loofah dress and a dress with the slogan “Trash Chic” were seen too, ending with a gold and silver sequin dress.

Jeremy Scott came to bow in a tee-that said “Couture is an Attitude”. Well said, because what’s here to add is that other than the hair and makeup, it was the poise of the models that really made trash seem fashionable.