Not only is the whole thing of Miss Universe pretentious but there’s one thing about it that also shocks me every year. Find out why I hate beauty pageants.

Disclaimer: Before you read this, I’d like to inform you that you’re about to fully waste a minute of your life.

Disclaimer 2: This isn’t some feminist rant about why beauty pageants are degrading (okay the first part is). Ugh, never mind. Let’s get started with this already.

Hey gorgeous! Remember the time when winning the Miss World and Miss Universe title was such a big deal, and when the whole family used to watch these beauty pageants crossing their fingers, waiting for when the title was gonna be announced, hoping their country won? Yeah, that still happens.

Yeah, in a time when the beauty pageants have already been criticized for being focused on solely on physical attributes and rewarding cliché answers to cliché questions. You can only see how mad people always are at it if you google it. Not only is the whole thing pretentious but there’s one thing about it that also shocks me every year. What is that, you ask?

Well, I’m glad you asked. It’s the Miss Universe title. Universe. And by that, you mean all the space-time including all the planets in all solar systems in all galaxies and their moons and asteroids, and all the species in them. Surely you understand the implications of this. I mean I’ve always found it hilarious to call someone Miss Universe even though we don’t let aliens compete or even inform them of the contest. 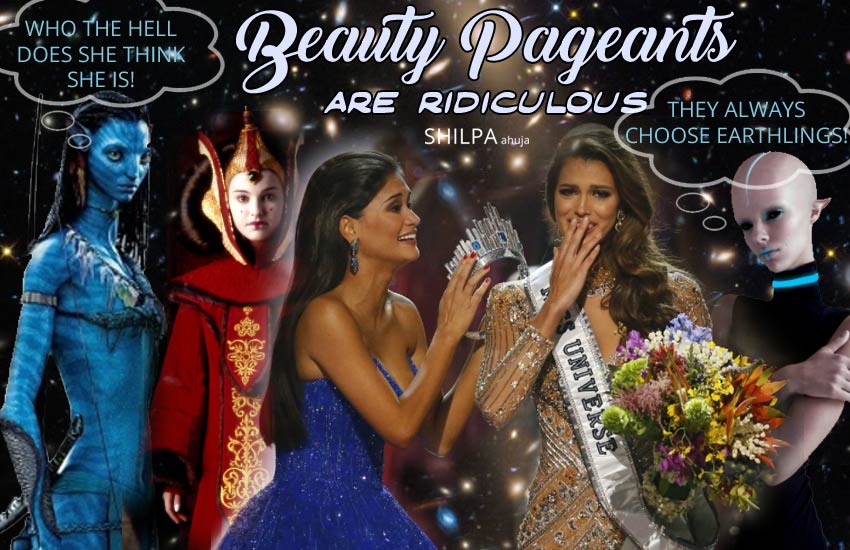 As it is, other species on earth don’t get to compete. So it’s only for humans. I mean, imagine if we had an alien invasion tomorrow. And some female humanoid species visited and started living here for a year. So will they be allowed to compete? If so, and if we still win, then go ahead and call your winner Miss Universe. Until then, she’s just Miss Human on Earth only. Also, if that happens, I’ll post another article on how the Earth judges were partial towards their species by awarding the Miss Universe crown to their own species.