From casual to formals, from Dior to Armani, we have rounded up the top 14 trends in menswear. Discover the latest fashion for men from Fall 2016.

Hey guys! The menswear Fall 2016 fashion shows were last month and I finally got a chance to write about this year’s upcoming fashion trends. The designer collections have wearable fashion styles, trendy but cool. The lines between formal and casual seem to be blurring in 2016, because the latest fashion for guys is somewhere in between – smart casual, if you may. 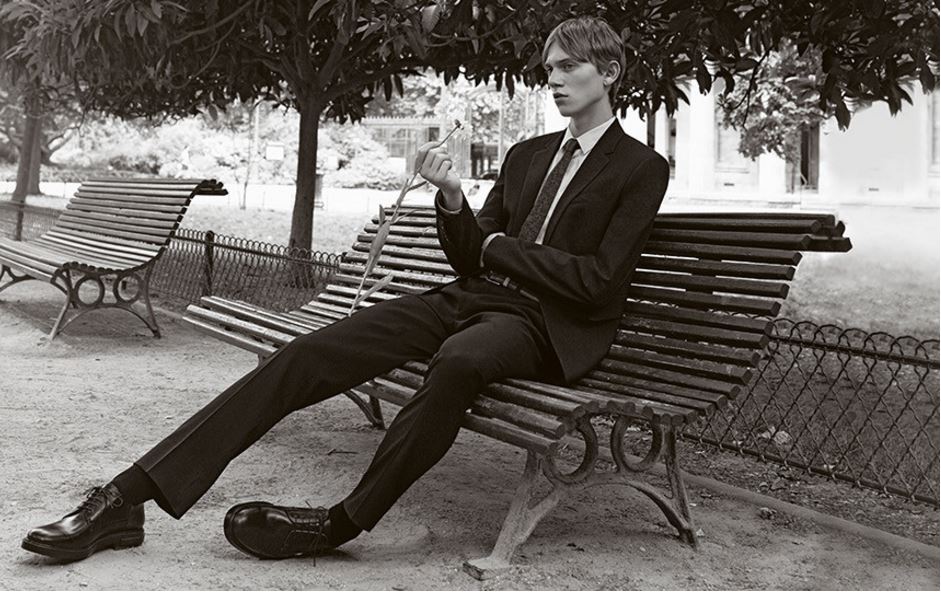 We saw short jackets and floor-touching coats too, but what most fashion houses had in common, including Dior, Dolce & Gabbana, Tommy Hilfiger and Saint Laurent were the 3/4 long wool coats that ended somewhere around the knee.

Love this trend. Athleisure mixes athletic and casual-wear, and this is a trend we saw in women’s wear too. Here, we saw yoga pants paired with casual jackets, soccer-inspired shorts paired with tweed jackets and other similar looks which introduce sportswear-esque clothes into everyday casual fashion.

Men’s bomber jacets are cool and casual. In 2016, the trend is of both quilted and thin bomber jackets.

Browns are trendy as is, but what’s stealing the show is burgundy and deep chocolate brown. We saw these colors in everything suits and separates like pants, coats, jackets, shirts, et al.

This is one trend we saw last year too, and it’s still in vogue. Try hints of bright color (highlights) on neutral colored outfits – like contrasting hemlines, backside of coats, a bright collar peeping out from under a grey jacket or a hint of color in the shoes. They break the monotony of the neutral silhouette and make the whole look trendy.

We saw a lot of cropped trousers and folded hemlines of pants on the fall 2016 men’s runways. The ankle was exposed, and not just with casuals but also with formal-wear.

Fur coats accompanied lots of outfits, as did fur and shearling collars on jackets and even shearling pants.

With all the slip-ons, loafers and laceless monk shoes, it seems like 2016 will be a comfortable (mostly) shoelace-free year!

There was some denim on denim, but leather really stole the show this year. Structured leather jackets, leather pants and even leather coats were seen.

Yet another trend that continued to 2016 from last year. The pants are comfortable, not too tight, but just skinny. But to be fair, there were also some baggy pants.

We saw statement overcoats at Dolce & Gabbana with text, guns and floral applique. Dior had rose-printed jackets, pants and coats. And if you want to make an unforgettable statement – try a bright cape jacket like Saint Laurent’s.

The collections had long and skinny scarves, as well as long thick-knit and padded scarves. Our favorites were the J.Crew printed skinny scarves that were tucked into the shirts and cardigans.

Other than fur and shearling, velvet was another heavy fabric that was big on runways this season. Try velvet suits, velvet jackets and coats and even velvet tux jackets.

The waistcoat formed a part of the three-piece suits, sure, but there were also waistcoats paired with overcoats and trousers as is.

The latest fashion for men is getting cooler and sexier! Which trend is your favorite? Lemme know below!