Anyway, here’s what to expect at the Lakme Fashion Week 2015:

One of the shows that everyone is really looking forward to is Manish Malhotra‘s first ever men’s only collection called ‘The Gentleman’s Club‘. The name suggests a hint of eliteness. Here are some of the first looks of this collection. We’re expecting some more Indo-western fusion looks in a rich and dark palette of emerald green, navy and black with contrasting nature-inspired threadwork. 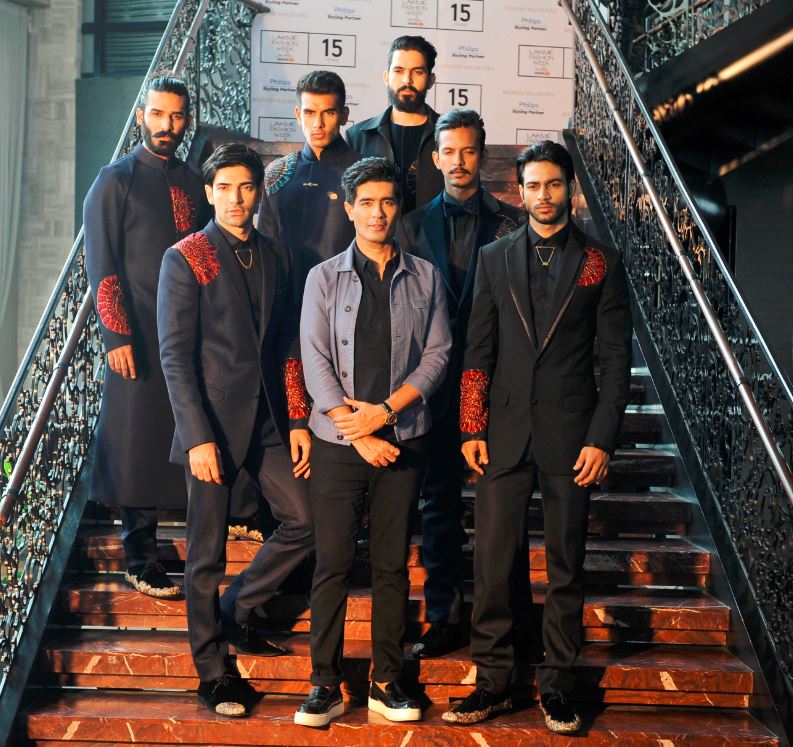 Plus, it’ll be interesting to see Bollywood actor Ranbir Kapoor being the showstopper for Manish Malhotra’s collection. Excluding myself, this guy has a large female-fan-following!

Other designers lined up whose collections we’ll be seeing are Tarun Tahiliani, Ritu Kumar, Anita Dongre and Monisha Jaisingh among others. Along with these, many designers are going to have their debut  shows at this Lakme Fashion Week 2015.

Neeta Lulla will be presenting a bridal show, so we’re expecting to see some intricate lehenga-sarees and lehenga cholis. And Indian wedding gowns maybe?

Known for her bridal-wear designs and Indo-western fusion-wear, Neeta Lulla’s collection at Lakme Fashion Week 2014 was a mix of beiges with bright colors like fuchsia and neon oranges. Here’s Priyanka Chopra walking the ramp for her last year in a beige ankle-length kurta. The style became quite the rage last season, only women wore it with chooridar leggings. 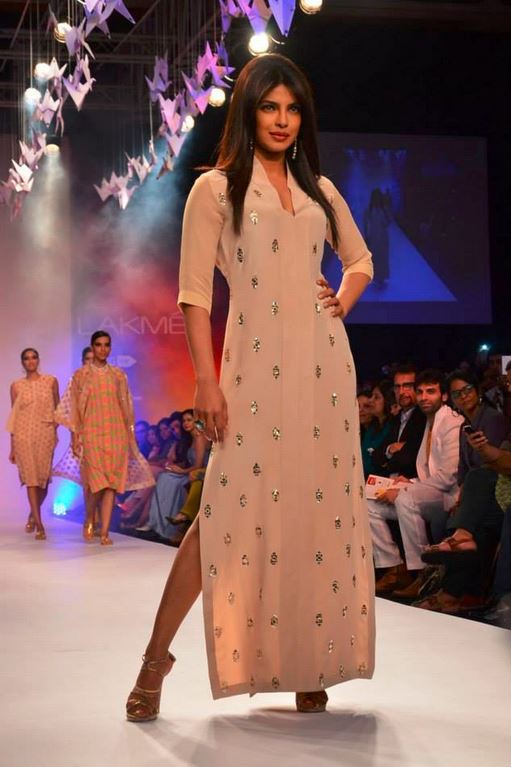 The Indo-western trend of kurta style tunics is getting old now, so we’re hoping to see some fresh silhouettes on the ramp this season. Hopefully it’ll come along before I lose interest in reviewing the modern Indian fashion.

Lately Neeta’s bridal wear has been including brocade, threadwork on silk and sheer fabrics with embroidery. Colors include rich tones of pink, reds and wines. Check out these from her current bridal collection on the website. So I’m hoping to see some new and some signature designs by her this season. 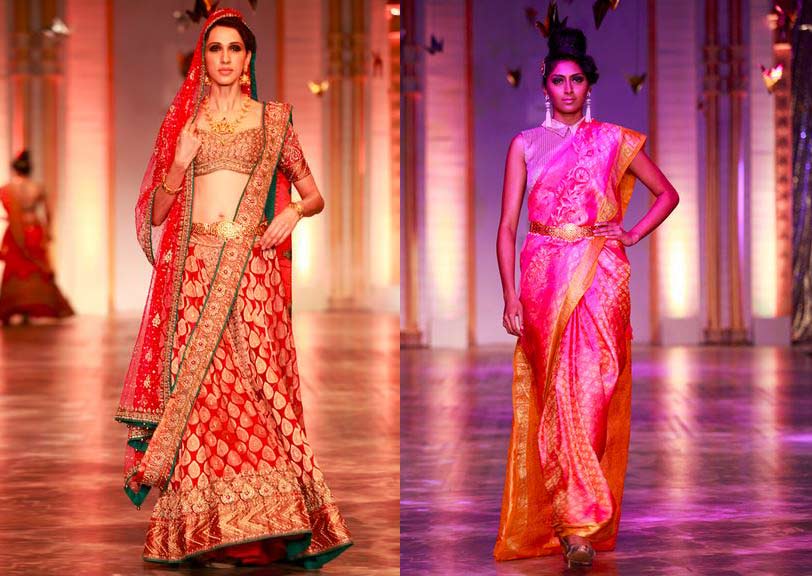 Gaurav Gupta show will be the grand finale of the season. Here’s what Gupta presented at the Amazon India Couture Week earlier this month: 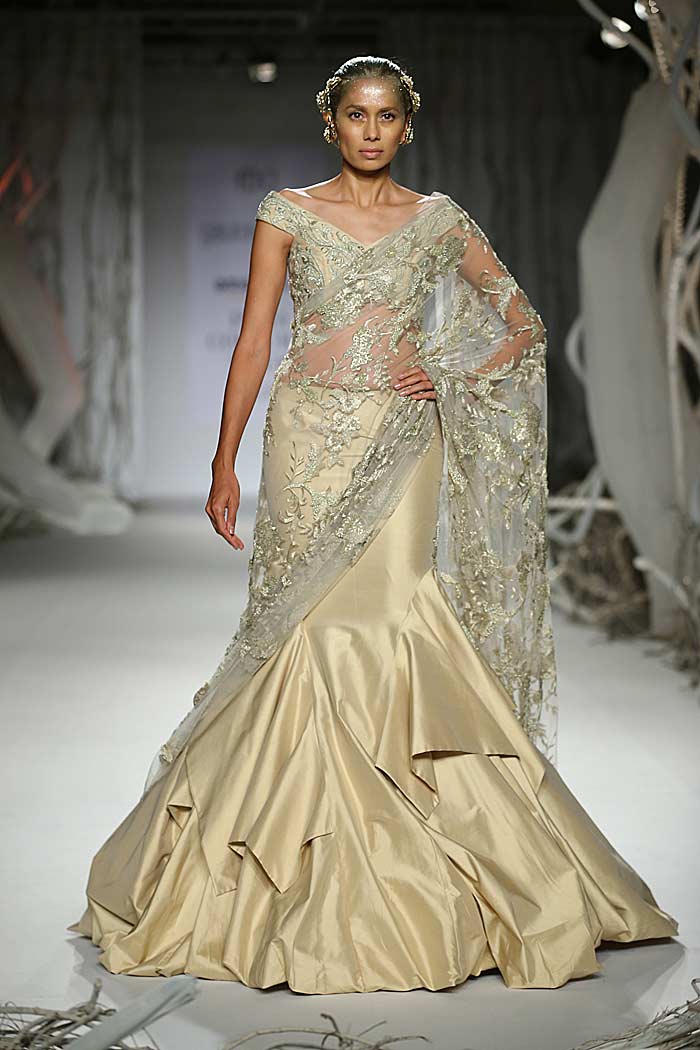 Psst. Read my review of Gaurav Gupta’s couture fall collection and view the photo gallery at the link below. Again, it’s a not-so-rave review. In fact, it’s quite the opposite of raving.

The younger club of designers from NIFD are going to present what they call the ‘Next Gen‘ fashion show.

An exhibition on Banaras handlooms called ‘Re-invent Banaras’ by an array of Indian designers will be curated by Shaina NC at Bhau Daji Lad Museum. Ritu Kumar is going to showcase a show inspired by this theme called ‘Varanasi Weaves’.

Ritu Kumar’s recent work has included anarkalis, sarees, kurtas, the works. And she’s been a lot into ready to wear fashion. Known mostly for her sarees, Kumar has been experimenting with design and fabrics. Her 2014 winter festive collection consisted of embroidered skirts and tops. Romantic and intricate.

I’m hoping she can reinvent her brand again with this collection. Because here’s some of her recent designs, which can use a lot of reinvention: For this year, I’m expecting to see lots of silk, obviously. So possibly sarees and more anarkalis. And I’m also hoping for modern silhouettes like trousers and blouses, because it will be interesting to see these translated into Varanasi silk. And that’ll be a wearable form of the rich fabric for us glam girls! Something like this perhaps? But that’s not her forte, so I guess I can kiss my designer-silk-pieces dream goodbye for now!

So that’s all folks! What are you expecting out of Lakme Fashion Week 2015? And which designer’s collection are you most excited about? Lemme know!