From the colorful costumes of the nobility to extravagant makeup, here’s an overview of the history of European fashion, along with the social factors like wars & gender roles that impacted it. 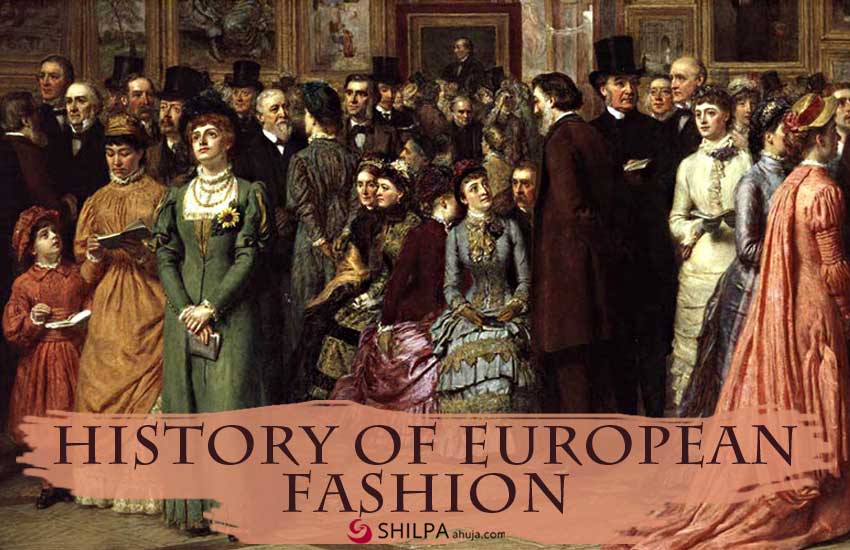 The first thing that comes to my mind when someone says European Fashion is Netflix’s new money-maker, Bridgerton. With the popularity of the show, there was a sudden pique of interest in vintage clothing and history of European fashion.

With shows and movies like The Crown, Versailles and Little Women, to name a few, it sure did look like the best time to be alive in terms of fashion with glamorous balls to attend and extravagant outfits to wear. Even literature classics like Pride and Prejudice and The Great Gatsby have shed some light on the different fashion styles and outfits in the eras that different classes in the European societies wore.

All this buzz brings us to the question: What did fashion mean to people in old Europe? What was fashion like back then? So let’s explore.

In 17th-18th century, fashion existed to establish the importance of a person. As Lindsay Kubin describes in a history paper, “Masking, hiding and duplicity are important roles in the use of clothing.” Fashion spoke a lot about a person’s social status and their place in society. This aided the establishment of social barriers of behavior, conduct, and gender roles.

The European elite class could be easily set apart from the crowd, thanks to their extravagant, impractical clothing and posh airs that they held around them. The working class dressed in practical clothes that they could move around and do errands in. Well, personally, that sounds much more comfortable even if it does come at the cost of a lot of hard work and social stigma.

Women were expected to wear corsets and have smaller waists adhering to feminine beauty and as an appeal to men. And considering the sexual attractiveness and reproductive ability being linked with bigger chests, smaller waists and wider hips, it made sense. These perceptions reflected greatly upon fashion and brought to existence corsets and wide structured petticoats. 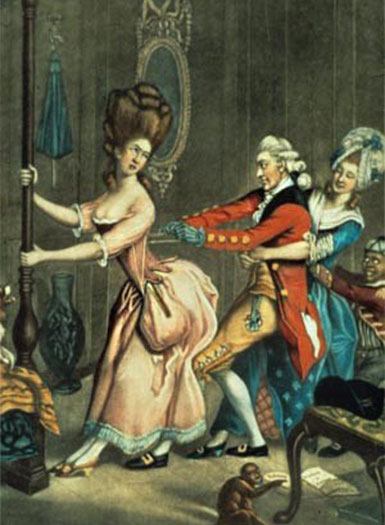 Another reason for this was that the social responsibilities expected of women were restricted to the boundaries of their homes, supervising the children’s maids, tutors and the house staff. This resulted in restrictive clothing which was eye-pleasing, painful and had very little space for movement.

While the fashion for men was fluid but still stiff and a show-off of their social status, wherein the nobles overdressed in fancy and stiff clothing and used makeup to set themselves apart.

As far as gender roles define, women are the ones typically known to be more interested in fashion but the French Kings and Princes have shown an equal amount of, if not more fervor towards dressing and fashion. But the fact that they had clothing comfortable for outdoor life cannot be overlooked as it contrasts greatly with women’s fashion guidelines. History of European fashion was largely shaped and controlled by the gender and social roles.

To know more in detail about this, let’s take a look at four fashion eras that shook things up back in the day.

18th century fashion was all about extravagant, ludicrous fashion and wigs! Think drama, exaggeration and throw in a bit, or a lot, of theatrical elements. All in all, it was a loud period for fashion.

The aristocrats, or the elites, generally wore gold embellished garments, embroidered and stitched with gold threads. There was a lot of show-off and pompous culture that further widened the gap between the social classes not just in this era, but throughout the history of European fashion.

Women’s fashion in this period was elaborate, to say the least, and alluring. The bodice was tight and all about showing off their waists while the necklines plunged deep, assisting the corsets in enhancing the décolleté.

Men’s fashion during this period was decorative and fancy across all classes and rankings in the society, with of course, minor changes in materials and exaggerated add-ons.

18th century makeup was the cherry on top of an excessively decorated cake. Powdering was used widely and sometimes the powders were tinted blue or purple. The makeup was very artificial-looking because they wanted people to know that they were the elites and did not work in difficult conditions.

Ceruse (white base for face, neck and chest), pink rouge on the cheeks, bee sting lipstick and mooches (black beauty spots) were widely popular. Women often highlighted the veins on their chest and breasts in blue. They used chokers to accentuate their thin necks and make them look longer.

Women coifed their hair, gave it height for events, and often used fake hair and curls. Hair was powdered white, sometimes tinted blue or purple. Bergere hats saw a lot of attention too.

The shoes during this period were identical, so to say, there was no left or right shoe. They simply took the shape of the foot after being worn a few times.

Romantic Goth was the adaptation of the romantic era by the gothic fashion trends. These attires were also used for mourning in the Victorian Era.

Romantic Goth makeup was soft and pale, highlighted with eyeliner and dark lipstick that was applied throughout. The powder was also used to make the skin look paler. The hairstyles usually consisted of long straightened hair, with elegant styles, dramatic up-dos and dark wigs.

Men’s fashion included dark gloves, tailcoats, suits or formal clothing in dark colors to match their jabots or cravats. Men’s fashion did not see much change except for the color palette.

Women’s fashion consisted of low shoulders, off-shoulders, pointed waists, bell-shaped voluminous skirts, which were all the craze. Hair was put in curls and buns or ringlets at the sides of the head. Bonnets for outdoor activities were widely popular, along with shawls as accessories.

Men favored cinched waists, broader chest silhouette and flared coats, inspired by Prince Albert. They wore tight trousers and long waistcoats that would become shorter and the trousers less fitted as the era progressed. Upstanding collars were popular as a remembrance of the cravats and the neckties. Hairstyles were still long but now combed to the side with bushy moustaches.

Women’s fashion towards the end of the Victorian Era saw the end of a few trends that had existed in the society since the 18th century.

Fashion Across the Social Hierarchy

Across the different classes, while the silhouettes and fashion transitions were constant, the clothing saw minor differences according to the practicality and the daily lives of the people.

The middle class usually wore more practical clothing, men’s clothes allowed them to move around easily and women’s clothes gave them breathing space to do the daily chores as they did not have the luxury of maids and housekeepers. The lower classes generally wore homemade clothes which were stitched out of passed down garments.

The Art Deco era was also known as the jazz age. This period was the party period and saw a lot of liberation of fashion.

Women wore flat and straight silhouettes. The flapper fashion took the stage and elegant silk, velvet and sequin gowns shone in the nightlife of this era. Coco Chanel left her mark with pearl jewelry and her little black dress. Geometric shapes, long line dresses and exaggerated accessories outlined this period.

The hemlines of women’s dresses became shorter as they broke out in rebellion. The stockings were rolled down and the gesture was considered immoral in some circles. But women had been corseted in the structured life for too long and this change came like a breath of fresh air. Men wore casuals and the coats were shortened, the stiffness of the waistcoats traded for softer cardigans and knitted sweaters. Even men’s fashion saw a transition when the trousers became more comfortable and the uptight cravats were traded for thinner ties.

The makeup became more personal and about decorating one’s self rather than following societal norms. Women painted lips in the shape of a cupid’s bow, wore kohl-rimmed eyes, and bright rouge on cheeks. Hair too was let loose and shortened, given softer curls or tucked neatly under hats.

These four eras were a few of the major periods of transition seen in history of European fashion. Now that we’ve seen how fashion transitioned, we can narrow down the factors that influenced this.

The sudden change in the history of European fashion, which we saw in the Art Deco era was a direct result of the first World War, which sent the men in all of Europe to war. As a result of this, women had to step up to support their families. Even the women from well-off families had to take on more responsibility which ultimately meant breaking free from the ties they had been bound by.

In this period, women filled all sorts of jobs that were earlier deemed only for men. As they say, necessity fuels change. The gender bound dress codes were no longer relevant. Designers like Coco Chanel further fueled this transition by promoting pants and trousers for women.

The second World War further carried forward this process, with hemlines becoming shorter and clothing easy to wear. Women wore jumpsuits and shorter skirts so they could easily jump into action in war zones. Stockings were traded for socks and warmer materials were traded for rayon. 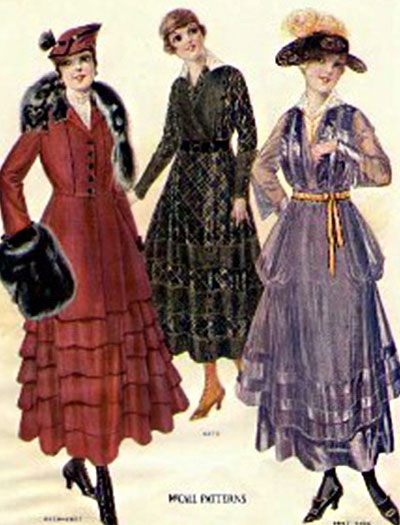 As recent as 2013, women’s fashion in France was still transitioning from being dragged down by the shackles of eras gone by, with women not being legally permitted to wear trousers.

Fashion has and still goes through a plethora of changes every decade as we can see through the history of European fashion. But most aspects of it are still remembered by designers and vintage enthusiasts. Fashion shows have adopted capes, velvets and stiff silhouettes. Corsets have hit the local markets, being adapted by the modern people. The make-up and hairstyles of some eras are crazily sought after. These are the remnants that stand to be the evidence of the immortality of fashion.

Do you have any vintage outfits hidden in your closet? Leave us your comments below and let us know which era you find the most fascinating! If this article inspired you to style a vintage look, do share it with us by tagging us @shilpaahujadotcom on Instagram.

Sakshi Lokhande is a Fashion Journalist Intern at ShilpaAhuja.com. She is currently pursuing her Bachelor’s degree in Fashion Communication at National Institute of Fashion Technology (NIFT), Bhubaneswar.

She’s always loved reading, especially mythology and fiction, which soon gave way for her love for writing; the two hobbies she owes her huge glasses to. She is passionate about writing things that impact people’s lives or are helpful to people in some way or the other. Sakshi also loves to dance and has been very active in cultural activities since her childhood. She enjoys jogging as it helps her clear her head and she often gets a lot of ideas for her design work and her writing while jogging too.

Having lived in Pune city for as long as she can remember, she has great love for old forts, architectural structures and old libraries, mixed with the fast-paced city life. This made her want to write things people would want to stop and read. To find a bit of themselves in her words, to slow down and take a breather.

Due to her college activities, she has also developed a lot of interest in slow fashion and sustainability. Sakshi’s everyday look includes boot cut jeans, graphic tees and wedges, paired with tiny earrings and maroon lipstick.