Guy recently dragged me, nay, convinced me, to watch Kingsman, the Secret Service. It was a total guy-flick. I mean, come on, it has ‘man’ in its name. I should’ve known. I had sort of anticipated, but Guy tricked me, saying it was going to be a comedy. Which it sort of was, to be honest. And I am a total sucker for comedies, let’s face it. So we can’t completely blame him.

“It’s such a guy movie”, I cried, frowning, ten minutes into the movie, munching butter popcorn and sipping Coke, my eyes fixated on the screen even while complaining. The young protagonist in the movie raced his car madly into the city traffic, being followed by the cops, glass smashing and bullets firing in all directions.

Guy’s eyes seemed even more fixated than mine, too busy watching the car-chase sequence to even reply to me. Multitasking is one thing guys cannot do to save their lives!

If this were a chick flick, I imagined, we’d have started peeking into a girl’s secret journal by now, or met a guy-next-door, but wayyyyy cuter than they are in real life, along with copious amounts of laughter, this season’s swoon-worthy designer collection. And high heeled pretty shoes.

And to accentuate these stark differences, I decided to make this Ultimate Comparison Chart of a Guy-Flick vs. a Chick-Flick. It’s a step ahead of dismissing these as an age-old ‘brawls and babes’ formula. In fact, you may even go as far as considering this a cookbook of sorts for making a guy/girl movie, where you can find all the necessary ingredients.

Of course, this highlights only the key ingredients. There could be many other smaller ones, like swap coffee or champagne with beer. But you get the gist.

Now let’s see if the two genres have any traits in common, you know, the kinds that could be combined to create a movie both sexes equally enjoy.

Plus, to give a bit more to either sex, add upto three additional elements from each genre. So, for example, a typical enjoyable-for-both-sexes movie would have: 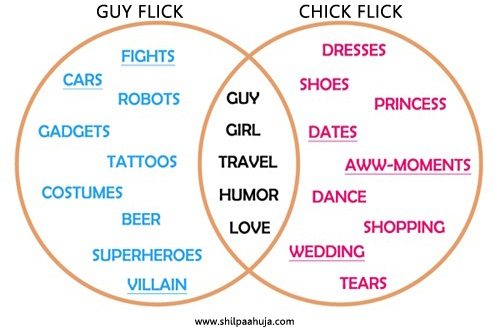 Here are two of the most popular examples of such movies: And we get (drum rolls please) Spiderman!! Here’s one more: 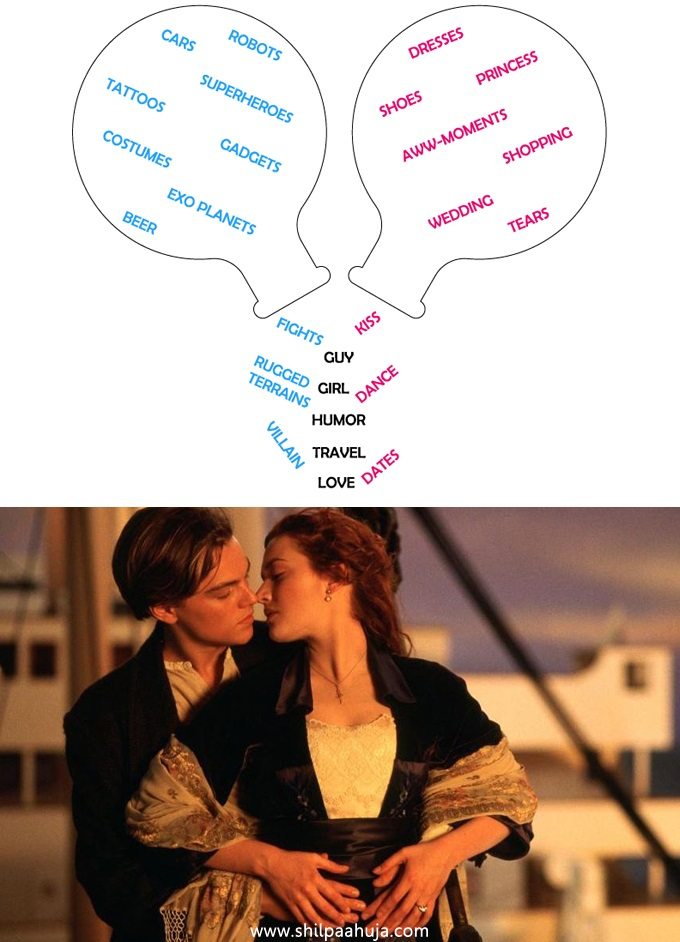 And here we get Titanic!! Applause!

And if I read this venn diagram correctly now, you get a typical Bollywood masala movie with these ingredients. So, voila! you just found yourself the (very) limited possibilities for creating a Bollywood movie!!