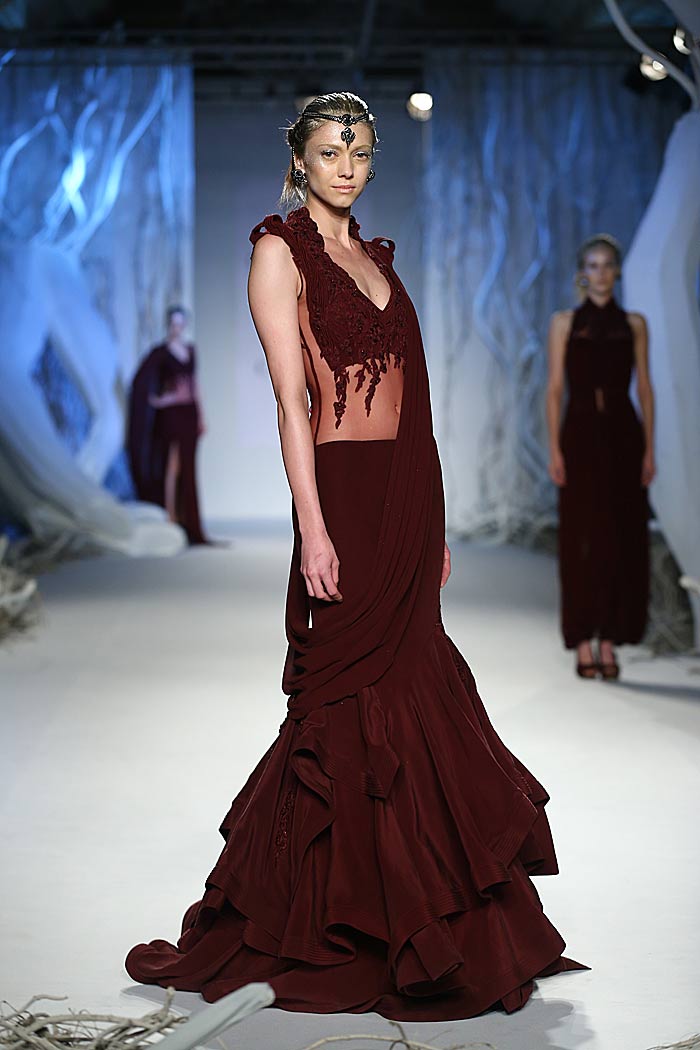 The venue was some sort of fantasy land – vines and LED strips hanging around tree-trunks, banyan root like structures beneath color-changing lighting. The models walked in one by one – in elegant, fantasy and goddess like silhouettes – at times a mermaid and at times a royal princess. The models had sun-tanned skin with bronze and gold makeup, and gold-powdered hair, making them almost without an ethnicity – like ethereal beings.

This was Gaurav Gupta’s Autumn Winter 2015 collection on Day 2 of Amazon India Fashion Week. The color palette was even more subdued than Gupta’s previous AW collections – consisting of whites and blacks, wine, champagne, rose, peach, grey and sapphire shades. We saw a lot of sheer, organza with crepe and satin. The jewelry was goddess-like to match the dresses – with head pieces and drop earrings.

Perhaps it played into Gupta’s theme of ‘Silt & Cipher’ that takes its inspiration from fantasy and mythology, bringing in fashion that is like the words etched in sand before they are washed away by the sea – meaningful yet short-lived – evanescent.

Or perhaps the tried-and-tested formula of tone-on-tone embroidered saree-lehengas, subdued colors, long jackets and mermaid gowns is working well for him. Not just that, monotonal embroidery on sheer reminds us of the signature Elie Saab designs. It may as well have been Elie Saab’s Indian version. Here they are: 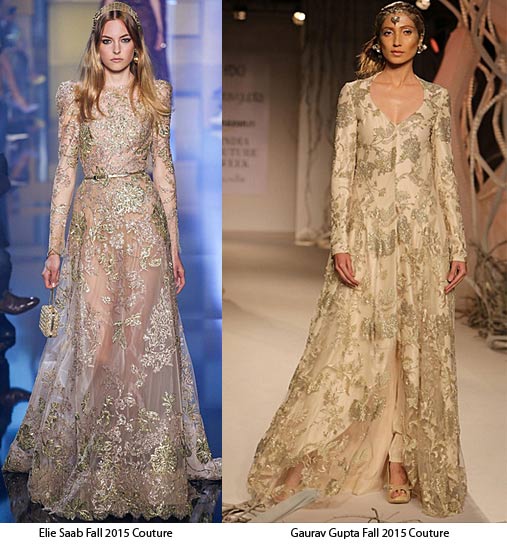 If novelty didn’t come in embroidery or floor-touching jackets, it came in the layering that came both in gowns and lehengas. The freshest pieces were combinations of jackets with skirted trousers. Or maybe they were layered peplum jackets that became capes to the trousers. Maybe we need a new name for them? Others encompassed peplums, short capes, and slitted skirts. There were many one-shouldered tiered mermaid gowns, some were real beauties, like the one worn by muse and showstopper Kalki Koechlin. Should we say repetition is allowed as long as it is awe-inspiring?