Fashion magazines are undergoing a rapid digital transformation. How will consumption change the market? This article discusses how fashion magazines in the digital era will evolve & what readers want, according to our survey. The smell of the fresh magazine cover that just arrived in your mail, flipping through the crisp pages of the newly opened periodical – this is a feeling fashion magazines in the digital era cannot replace. But the world shifting to the digital platform isn’t a privilege or want, but mostly the need of the hour. We live in a technologically advanced era that is evolving at an unprecedented rate. 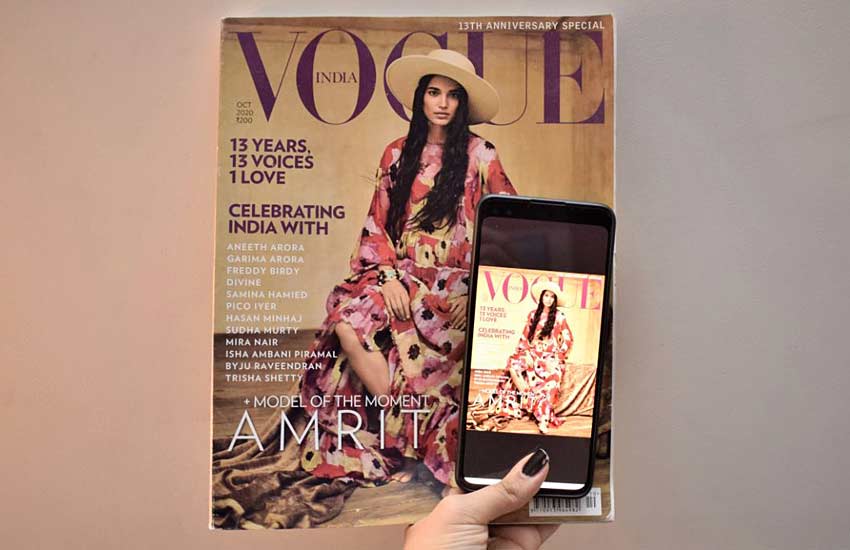 Fashion magazines have been an integral part of reading amongst fashion students and enthusiasts for the longest time. They create a discourse around fashion and make it accessible to the consumers. They’re a combination of cultural and social values along with material ones that are now a visual representation and reflection of the times that we live in.

Gradual Shift of Fashion Magazines to the Digital Platform

In the early 2000s, the digital platform started to grow at a very fast pace. Physical interaction and experience have always had and still have a place in our hearts in this era. You create an emotional bond with your most loved issue of the Elle or Vogue which is irreplaceable. Though print has existed for centuries, it is no longer the fastest or most cost-effective way to publish. People have progressively been conscious of the environment and the long-term effects of destroying it. To get the readers’ opinion, ShilpaAhuja.com conducted a survey this month among 215 fashion enthusiasts from different age groups between 13-45, both digital and print media consumers, where over 80% of the respondents were between ages 18-25, and 75% were female.

When asked what appeals to them the most about digital magazines, readers felt that they are a way to save their money, receive quality content faster, and at the same time do their small part for the environment. Hence, digital magazines became a gateway to a more environmentally sustainable solution while increasing access to the media.

Here are some more insights from our survey:

Why did the Shift Happen?

The growth of social media also brought about a growth of competition for fashion magazines in the digital era. What exactly is competition for them you ask? Anything that drives clicks. Which would be fashion blogs and websites that were and are part of a more inclusive expanding democracy. It all began with a few independent bloggers who started posting their personal style, fashion opinions, and lifestyle. They started making fashion more accessible and relatable to all.

Do people even still read and buy print magazines instead of digital ones? According to our survey, only 23% of respondents still buy print magazines and read them, even though 33% do prefer print over digital. Flipping through crisp pages of a fashion issue is an unmatchable experience for them that digital could not replace.

But with time, majority of the people started to prefer reading their eagerly awaited fashion news on a digital platform rather than in a problematic physical form. It never fits into their handbags or pockets. Also, in this fast-paced world, some people just want to read a few articles and not the whole magazine in itself. This made the print media industry realize that it was time to start their own digital platforms too. 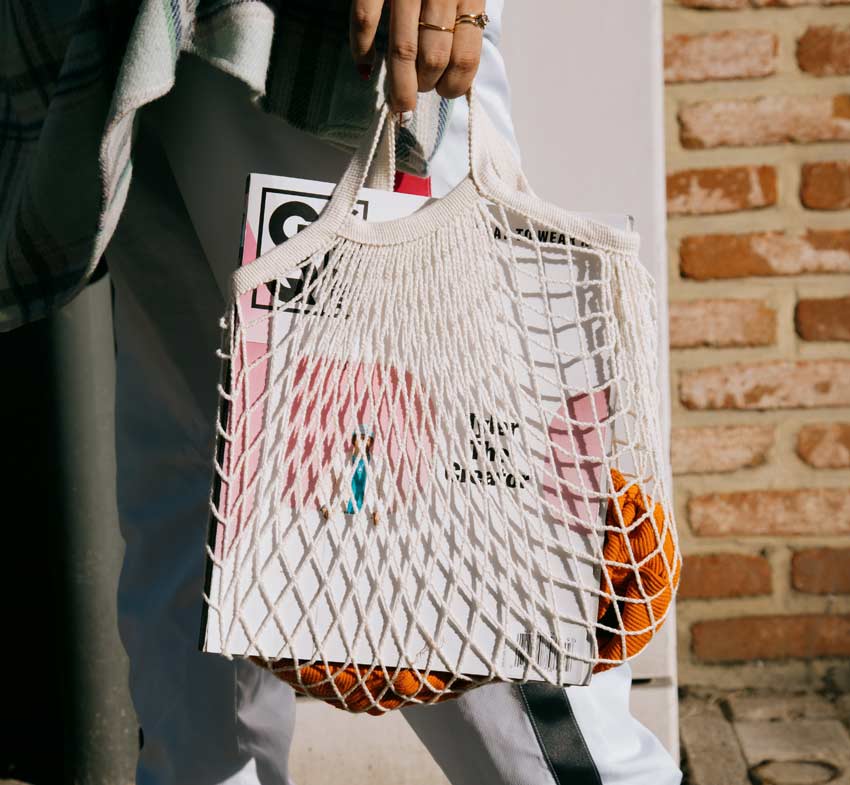 Hence a digital platform allowed for quick interaction with the audience and made content comprehensible and compact. This allowed the readers to read only what they wanted to and not buy the entire hefty magazines.

Present Scenario of Fashion Magazines in the Digital Era

The editors have realized that with a digital platform comes a global audience. An online magazine started in a small city of India wouldn’t just reach the people in and around that city. But, it would also reach an audience sitting halfway across the world. With such a global reach, comes a much bigger responsibility for the industry.

The fictitious but powerful ‘Scarlet’ magazine in the popular web series ‘The Bold Type’ shifted its dynamic from print to digital. It switched its content everlastingly which is exactly what going digital means for fashion magazines in this era. They have to be more careful about the content they put out there. It gives the industry a sense of responsibility to tackle more serious and sensitive issues.

When you flip through a traditional fashion magazine, you would notice a trend. A trend so obvious that it leads to the dissatisfaction of women and men all around the world. The idea of a perfect body is surreal. They fail to show the wrinkle wars or the unwelcomed acne guests on the tall, slender and symmetrical faces. With the switch in digital, fashion magazines are no longer only a portrayal of the dreamy glossy lifestyle.

Rather, they are a gateway to switch the standards of beauty. Especially because the internet is filled with young adults, the editors now have a chance and most importantly a responsibility to be industry leaders. When we asked our readers what makes them want to read a fashion magazine, 66% of the respondents pointed towards its influential content and imagery. Magazines can now give their consumers what they really want – more inclusive, influential, and inspiring content that represents all.

The subscription model of magazines has also switched. People would now rather read content online for free than buy an expensive yearly subscription. They also used to wait a whole month for a new issue. Instead digital delivers more up-to-date coverage of fashion shows, political events, trends, etc. It has also helped magazines gain readers who wouldn’t generally buy a fashion magazine.

Effects of the Pandemic

A year ago, we entered an era that would go down in our history books. An era filled with uncertain times and the digitalization of the entire world. Brands were not the only ones who suffered a change but fashion magazines did too. During the first wave of the deadly pandemic in 2020, Stylist postponed its print publication and instead launched a digital magazine app.

Dazed had announced that its Spring/Summer 2020 issue would be free to download digitally a week before the print issue goes on sale. For the April 2020 issue, Vanity Fair Italy’s cover star was not a supermodel lounging on a yacht or a movie star in Gucci. Rather, it was a lung specialist in a starched white lab coat.

They’ve had to make dynamic changes in content and covers to make themselves more relatable and accessible to the commoners. Since, in the current situation, how many readers would step out and buy the lustrous fashion magazines? Close to none. Which is absolutely nothing as compared to the number of users on the internet yearning to read!

What the Future Holds for Fashion Magazines

I asked our team members why they chose to work for a digital and not a print fashion magazine. One of the interns told us, “Digital magazines are easier to reach to the readers, they provide a better user experience. If I’m putting my hard work somewhere, it should be worth it, right?” Another told us, “We can have a better interaction with the readers. The world is getting digitized now, so I’m not sure if in the next few years, print magazines will exist or not.”

The gist of the answers was simple – complete digitization is the future for fashion magazines in the digital era. This generation feels that digital magazines are more inclusive and real regarding their content. It would also reach an audience larger than any print magazine could. We’re one tap away on a link to flaunt articles that really matter and have a much better interaction with our readers, you!

Fashion magazines in the digital era can create more engaging and interesting graphics for readers all over the globe to keep them invested in their content. They would create a larger community where fashion will have a more authoritative voice. Help create a space where important, serious, and sensitive issues are not hidden in the bright and colorful pages of the magazines. They now would take a more ethical, socially responsible, and unorthodox stance. Create content that can produce a sense of belongingness and connectedness in this uncertain and surprising era.

In our survey, a majority of readers wanted and hoped that print and digital magazines would co-exist. But for this to happen, the former would have to evolve unconditionally in terms of their content, imagery, and accessibility. But do we really believe this could happen in the advanced digital era that we live in?

The future of fashion magazines, in my opinion, would be entirely online. In the digital era, the glossies will aspire to become more authentic and reflect the needs expressed by today’s consumers: inclusivity and prominence. What do you think, would our future monthly fashion issues be printed and kept on our nightstands? Or would we be seeing it shift entirely digital as you are reading it right now? Let us know your thoughts on the future of fashion magazines in the digital era in the comments below or tweet us at @shilpa1ahuja!

Shreya Jain is a Fashion Journalist Intern at ShilpaAhuja.com. She is from Bangalore and currently doing her undergraduate in Fashion Communication and Styling from ISDI School of Design and Innovation, Mumbai. She aspires to build her career in fashion writing and fashion styling and make her mark in the industry.

She has a fashion blog and runs an online thrift store. She is interested in photography, sketching, and also runs her personal account on Instagram where she regularly shares how she styles her wardrobe.

She is passionate about traveling and meeting new people. An adrenaline junkie, she has been skydiving and cannot wait for her first scuba diving experience. She firmly believes that people create their own destinies.