What makes fairy tales so appealing to the fashion industry? From pop culture to international street style to couture fashion shows, magic inspires fashion designers and artists everywhere. Magic itself is fashion’s fairy godmother! Let’s see some of these examples of fairy fashion and lose ourselves in our own enchanted daydreams!

Fairy tales and fashion have a strong, undying connection. In fact, I may even say that fashion takes it upon itself to create fairy tales, or rather, makes them come true. Elementally, fairies have a surrealism about them, which fashion, just like any other form of art, loves to explore. 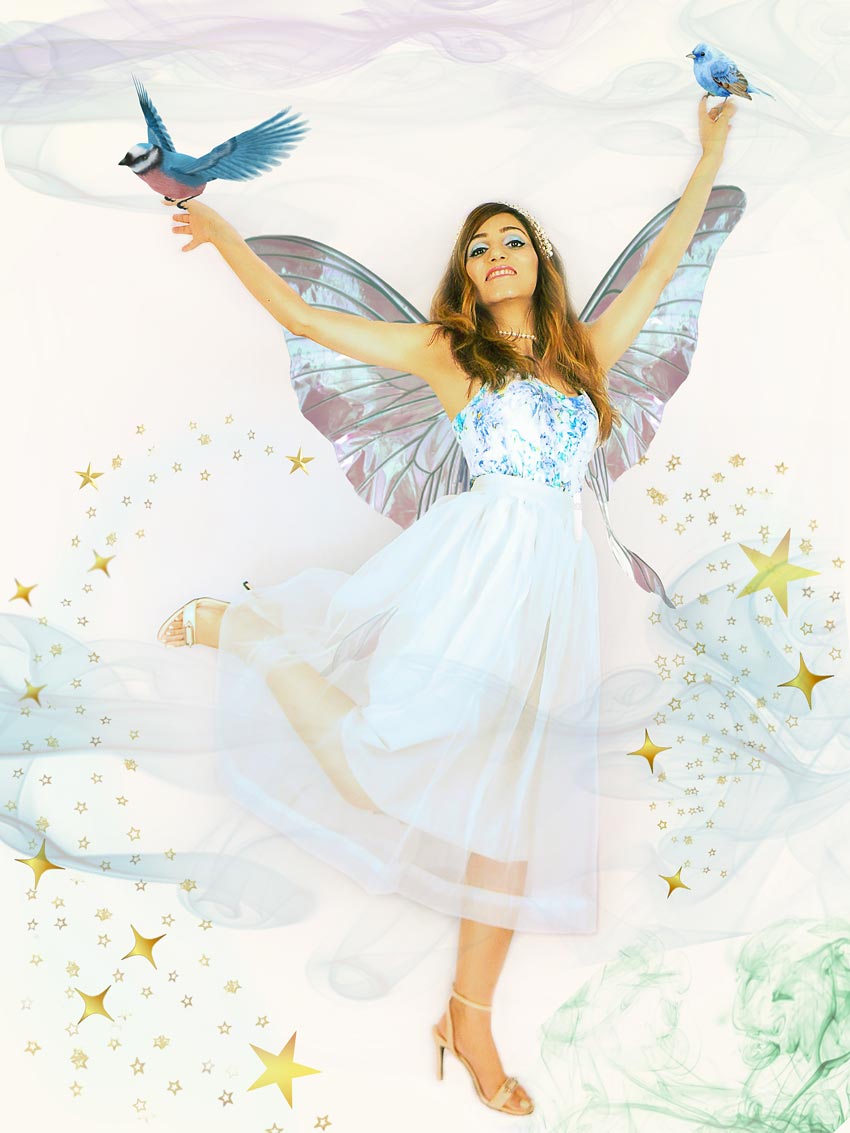 And it’s not hard to see why.

The female demographic makes fashion industry’s biggest consumer segment. Plus, fairy tales entrance girls at very young ages. In fact, if you look closely, young girls are also the primary target audience for fairy tales, especially Disney ones. And whether a girl is just fascinated by fairies or completely obsessed, our interest in them continues into adulthood.

For example, fairies are a common cosplay costume idea. They form the inspiration of countless Halloween costumes every year, especially for little girls and babies. Lots of parents also opt for fairy themed baby-girl photo-shoots. For couples, it’s common to have fairytale-themed weddings and pre-wedding shoots, complete with horse-drawn carriages, castles in the background, idyllic or enchanted night-time settings like gardens with fairy-lights to give the illusion of magic. Surely, it fits, as most fairy tales end in marriage, or the princess falling in love with her handsome prince charming! Princesses, angels, fairies – all take us to the dreamy realm of fairy tales where everything is beautiful. Fantasies add an element of mystique and wonder. This awe builds up aspiration, which is always a good thing for consumerism, and so brands get inspired by fairy tales all too often. Victoria’s Secret is one of the best examples. Their annual fashion show has “Angels” walking down the runway with larger-than-life wings and surrealistic costumes. In fact, with a penchant for all things kawaii, Japan’s youth has even made fairy fashion a whole subculture and street style trend. Fairy kei, translating to fairy style, has teenage girls and young women dress like fairies, or wear outfits inspired by fairies. Pastel shades, fairy tale prints, flower hair pins and rose colored hair are common.

Fairy tales, within themselves, too, have great fashion. Cinderella’s story was completely built around a fashion makeover – a fairy godmother who transforms the princess into, well, a fashionable princess, with a different gown for each ball night, and accessorized with glass slippers! Inspired by this, tales of magic generally do well at the box office. Fantastical feature films are awe-inspiring and aesthetically-pleasing by definition, giving them the opportunity to become great works of cinema. Avatar, Frozen, Harry Potter, Star Wars, Beauty and the Beast – all have fantasy elements and rank within the top 15 highest grossing films of all time.

Fairy Tales in the Fashion Industry

Fashion and fantasy are really intertwined – one inspires the other. After all, fashion editorials of magazines strive to create magic with every shoot, page spread, or, in the digital era, Instagram pic! Even our digital magazine isn’t far behind. Our editorial series, Adventures of Shilpalyn, has episodes of a modern fantasy fairy tale. And I styled this photo-shoot and look to re-imagine fairy fashion. Replete with wings, fairy dust, sparkles, unicorns and enchanted birds, it re-imagines me unapologetically as a fairy!

The one reason why fantasy is so inspiring in art is that in the realm of fairy tales, anything is possible. Supernatural imagery can create a sense of wonder. It not only creates great photography opportunities but also transports the viewer into an other-worldly reverie. Photographers like Ukranian Irina Istratova of Big Bad Red has a penchant for the dark side of magic. Whereas Christy Peterson focuses on the softer side by capturing little girl fairies.

Fashion brands selling fairy fashion are also gaining popularity, like Sydney based Gigi’s Fairy Fashion Shop. And of course, the fashion world observes examples of fairy inspirations on the runway all the time. Dior built a whimsical fairy-tale forest for its Spring Summer 2017 couture fashion show. Additionally, just a simple scroll through their Instagram feed or past collections will reveal elements with elements of fantasy embedded in their designs, although the fashion house (purposefully?) stays away from every using the  term ‘fairy’ as a part of their brand communications.

“In the realm of fairy tales, anything is possible.”

Ralph & Russo’s Eden shoe is inspired by the Garden of Eden, with filigree leaves spiralling up the heel. Alexander McQueen’s collections also often have the fairy tale angle, such as the Fall 2014 RTW, which had dark magic inspirations.

Fairy tales, just like fairies, can have so many versions and countless elements to set a mood. The fairy godmother, dark fairy, flower fairy, the evil witch, the bad wolf or the winged fairy princess – the list goes on. These multiple variants enable fashion designers to construct their own interpretations. Young Australia-based fashion designer Paolo Sebastian’s whole brand revolves around fairy fashion. At Paris Fashion Week, its hardly a new thing. Many other designers such as Giambattista Valli, Naeem Khan and Elie Saab’s couture dresses often have an ethereal, dreamy quality.

Of course, fashion designers get to act as the fairy godmothers to celebrities for their red carpet appearances. Celebs dressing in fairy tale gowns isn’t unheard of. Blake Lively’s powder blue Cinderella gown by Vivienne Westwood at Cannes 2016 would be at the top of my list. Bollywood actress Aishwarya Rai at Cannes 2017 wore another Cinderella-esque gown – only bigger and poofier. Jennifer Lawrence’s white Dior gown at Oscars 2013 was also one such example. Katy Perry wore a gold dress with large angel wings at Met Gala 2018.

Almost every culture has fairy tales are embedded in some form or the other, giving these works a global appeal. Back home in India, designer Tarun Tahiliani showcased his 2017 fairy tale wedding collection with a fairy tale-esque backdrop.

And in the Real World…

For most of us in the real world, fairy tale fashion sometimes translates to wearable fashion trends, like angel sleeves, holographic makeup or tulle skirts. After all, the opening credits sequence of girly TV series, Sex and the City, featured a tutu-clad Sarah Jessica Parker. It built up the mood of the show – the fashion fantasy – the urban fairy tale – where every girl is really a well-dressed modern fairy. Until, that is, we get splashed on the sidewalk by a bus.