We review the stylish latest Netflix web-series Emily in Paris created by Darren Star; and do the inevitable comparison with Sex and the City. 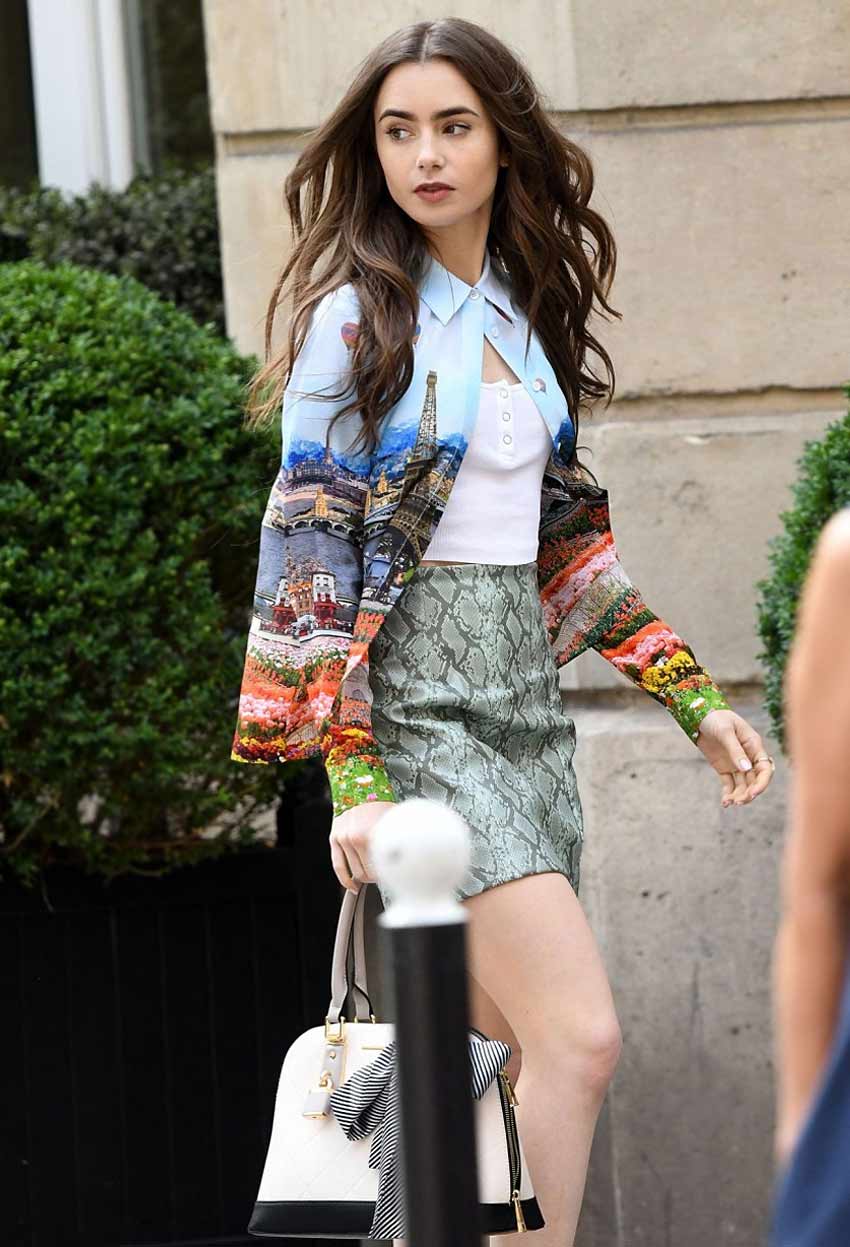 (This article contains spoilers from the first two episodes.)

Even before its release, the new Netflix web-series Emily in Paris had already received much publicity. Created by Darren Star of Sex and the City fame, there had been much anticipation. The teaser-trailer looked awesomely chic with Lily Collins in the lead, instantly putting it on my watch-list. Now, just a day in and I have already watched a couple of episodes and been avoiding reading reviews until I publish my own.

Emily in Paris: The Main Premise

For those who missed the initial hype, the American comedy-drama web show Emily in Paris is about the work & love adventures of a girl from Chicago who has to move to Paris for her marketing job at a French luxury advertising company. The American girl in Paris trope is actually a common occurrence in pop culture, and it and of itself is nothing unique in 2020. We’ve even seen moments of this trope in some of our favorite chick-TV shows like Sex and the City and Gossip Girl, exploring cultural differences and romanticizing the city of love. So anyway, Emily in Paris starts with the titular character moving to Paris, where she faces a whirlwind of highs and lows. While her French colleagues are not welcoming at first, her positivity and charming personality quickly impresses some of those around her (especially the men), and eventually warming her colleagues too. The first couple episodes show her at work, parties and luncheons, thinking up social media marketing ideas for the firm, all the while wearing some really pretty outfits.

The Fashion, the Wit & the Life

As expected, it’s one of the most fashionable TV shows of the year, and even more aesthetic than Sex and the City in fact. Although recent television like Gossip Girl have set the bar pretty high, and by those standards, the fashion of Emily in Paris is yet to feel iconic or fresh.

The show, although set Paris, is très américain at heart, whether it’s due to the main protagonist’s refusal to try to work the accent français (she constantly pronounces très as ‘tray’, witty American dialogue (at one point a character says about a hot chef, “Well, I’d like to bon appétit him!”) or showing a romanticized version of everything French. For example, Emily finds a great apartment with the most terrific view of the city (come on!) and her neighbor is extrêmement sexy (he’s also the aforementioned chef) (it happens only in movies – where are all these hot neighbors in real life?). Moreover, almost everyone at her Parisian workplace speaks near-perfect English, and Emily finds it oh-so-easy to work in fashion advertising after having a work experience in pharmaceuticals (!).

To her French colleagues, Emily is unsophisticated, cringeworthy, and annoyingly workaholic/ social media savvy. To her, they are suave and as she puts it, they have the “Je ne sais quoi thing going for them.” This whole romanticization of the French people is in itself very American to me. 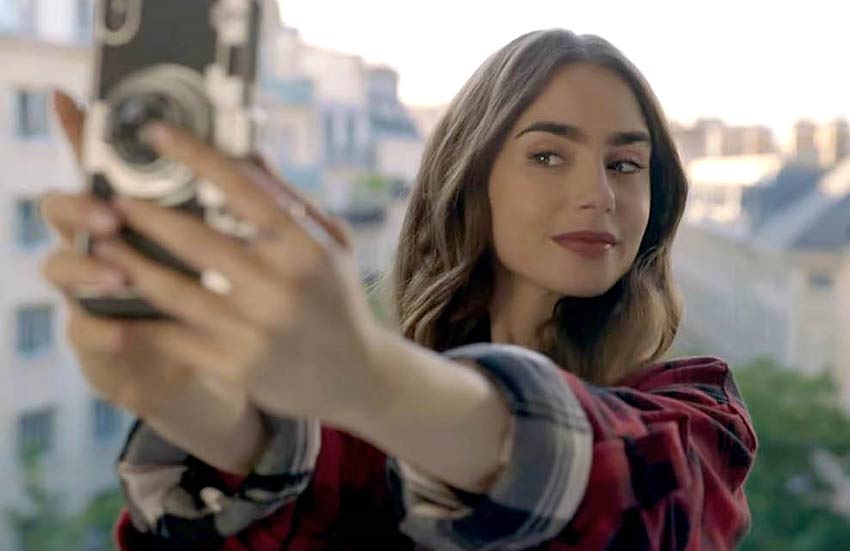 Emily is, on the outside, a basic girl who loves to take selfies for everything she sees, from weather to food to French street art, and even makes social media boomerangs. She certainly knows her Instagram better than me, although I know enough to tell you that you can’t gain thousands of followers in a week even with Parisian selfies. Anyway, she still doesn’t fail to charm us with her endless positive attitude. This is a career girl who knows and enjoys her stuff, very focused. She starts off as a bit too hopeful but yet is interesting as a character.

Emily in Paris vs. Sex & the City

Now let’s do the inevitable comparison between the two Darren Star shows. Released in the 90s, Sex and the City is quite iconic and definitely well-remembered. Emily in Paris has a lot less sex and a lot more city – the city being Paris. Even so, there are quite a few similarities between the two shows.

Carrie vs. Emily – the Main Protagonist 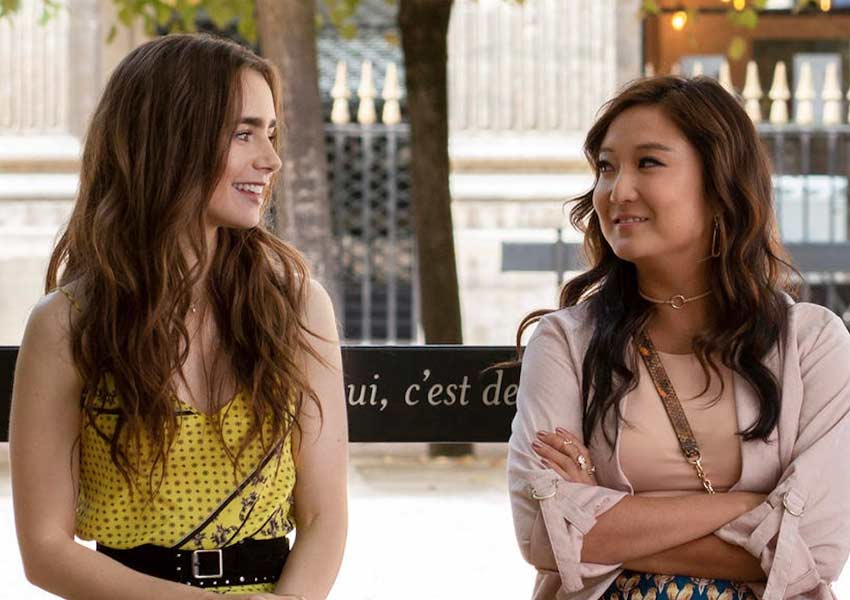 The main protagonist of the show, Carrie was a decade older than Emily here. In fact, many other things about SATC have aged much better than Carrie’s character, who people now find irresponsible, hopelessly romantic and even selfish. Funnily enough, I’ve just reached the age to be able to relate to Carrie and her career-woman BFF Miranda, but now I have to watch Emily with her more enthusiastic yay-attitude that is so twenty-something.

My generation grew up with SATC and have learned much from Carrie’s mistakes. We don’t spend our entire salary on shoes (having already done that in our twenties, we’ve outgrown that). We take our laptop’s periodic backups (15th of every month). And we certainly don’t wait around for our Mr. Big’s big romantic moment (I married someone for whom I was always the one, thank you).

And that’s why even though Emily is younger than Carrie, she’s still more relatable today – the 21st century mix of Carrie and Miranda. Emily is also just as witty – at one point she describes a luxury perfume by saying it “smells like poetry,” to which the perfumer says that to him, it smells like, “expensive sex.” “Better than a cheap date,” she retorts.

Just as well, dressed, Emily’s style is way above her pay-grade, just like Carrie’s was. We’ve already seen some gorgeous outfits, shoes and bags, too. However, her fashion is more acceptable in contrast to Carrie’s sometimes questionably experimental taste. And this is something I’m actually worried about, as it was because of those questionable outfits that Carrie’s style became so iconic and memorable.

Emily although is just as dramatic when it comes to romance, breaking up with her Chicago boyfriend within a week of moving to Paris –because he’s unwilling to take a flight there. She dumps him saying, “I’ve waited enough –“ girl has probably not dated enough a-holes in her life. I’d personally be willing to look over much worse for longer (uh, don’t worry, you don’t have to take relationship advice from me, someone else writes our dating column). Set in this new decade, Emily in Paris is a lot more inclusive compared to SATC. So far we’ve seen a Mandarin-speaking Asian American character and also a black character. The main cast aren’t all girls like SATC had, but instead features mixed genders and ages. But there’s a long way to go for this show to become as forward-thinking as SATC was in the 90s.

Emily in Paris: The Lifestyle Observer

The show is as much about cultural comparisons and lifestyle trends as it is about fictional stories. Here are a few points: In conclusion, I’d say that Lily Collins does a great job playing une charmante character. The show is a fun watch, but it remains to be seen if it’ll live up to the expectations it has set with its SATC-comparing publicity. So far, it doesn’t seem ahead of its times. Given the right direction, it could become a memorable one at least.

The show certainly stereotypes France and its people, so if you’ve lived in Paris you may find these things slightly cringy. However, if you’re looking for a binge-worthy show with pretty things and fashion, this is a good go-to. For this reason, we’re certainly putting it on our list of top girly TV shows.