How far has the basic swimsuit progressed in Indian culture? From retro sports style swimsuit to new age string bikinis, here’s the evolution of Bollywood bikini decade by decade! 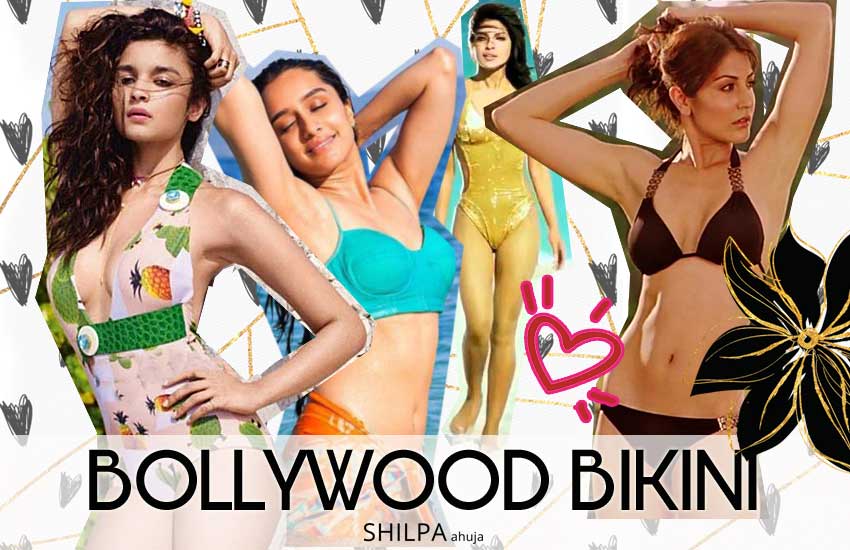 Hey gorgeous! Wearing a bikini today is not a big deal. Or is it? A lot of Indian women get inspired by Indian Bollywood fashion. And Bollywood and bikinis have a strong relationship because the latter is used to market a lot of the former!

Ever wondered when the bikini trend first started in Bollywood? Well, it goes back to 1960s when the actress, Tanuja Chandra sported one in the movie, Chand Aur Suraj. Since then there has been no looking back, the Bollywood bikini has evolved, taking inspiration from Hollywood and even got Bollywoodized sometimes (Duh! So typical!)

The styles kept evolving. But are the Bollywood heroines in bikini shown for empowerment or objectification? Let’s find out! Let’s take a look at the evolution of Bollywood bikini!

Of course, the bikini started by not being a bikini at all. Tanuja wore a backless swimsuit with an overskirt that made it look like what can today be called a party slip dress! What I love the most about this look is that her swimsuit is backless and yet comfortable to swim in. This Bollywood bikini style was the beginning of swimwear in Indian cinema. 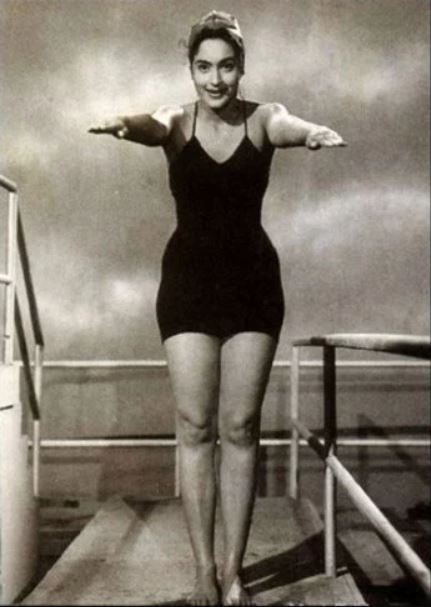 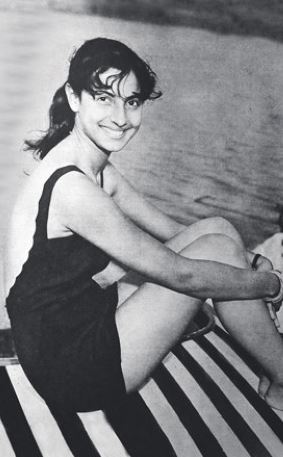 It’s common for Bollywood to take its style inspiration from Hollywood. Back in the 60s, it took a few years for trends to make their way to the east. The 50s Marilyn Monroe style bikini was taking over Bollywood by storm in the 60s. It was a bikini and it was sensuous. Sharmila Tagore was one of the first actresses to sport it. The leopard print bikini she wore for a magazine shoot was too sexy to handle.

Back in the sixties, the Bollywood bikini body used to be curvy, as this was to the era in which a curvy body was considered fit and sexy. She also sported a blue one-piece swimsuit in the movie, An Evening in Paris, which was apt for swimming and sailing. Not overtly sexy, but empowering nonetheless. But it was fashionable, too, with prints and the bright color complementing her.

In the 70s, Bollywood bikini was all about adornments and experimentation. There were cut outs, embellishments and ruffles. Nutan wore a slip dress-esque swimsuit, which was popular as a 60s Bollywood bikini style, with side cutouts. She accessorized it with a hat for a beach look.

And one can never forget the famous look by Dimple Kapadia worn in the movie, Bobby. The simple yet elegant two-piece bikini was sensuous, hot and she stole a million hearts with it. The curves were relatable, unapologetic and real before gymming and heavy photo-editing became fashion industry essentials. 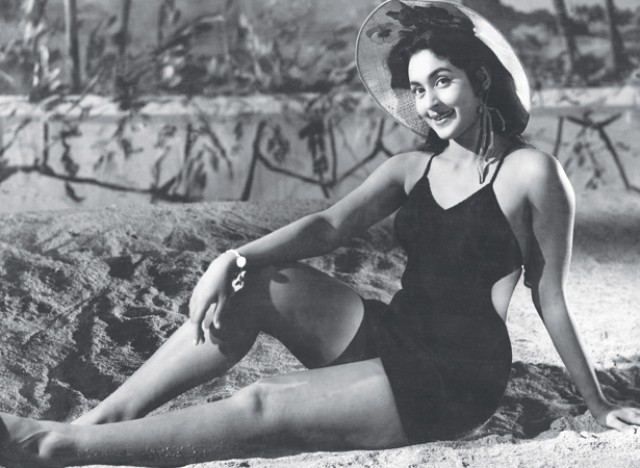 By the 80s, some of Bollywood’s top actresses had rocked swimsuits. However, the eighties was the era where the swimsuit was used to grab attention rather than for swimming. The looks were chic and elegant but also too decorative.

They were more like posing costumes rather than swimming attire, accessorized with makeup, chic haircuts, sarongs and jewelry. Parveen Babi popularized sarongs in the movie, Yeh Nazdeekiyan. However, in the late 80s, the one-piece swimsuit made a comeback, which would continue in the nineties. Madhuri Dixit sported the sports style bikini in the movie, Tezaab. The subtle makeup look was back and the bikini was worn to serve the purpose. 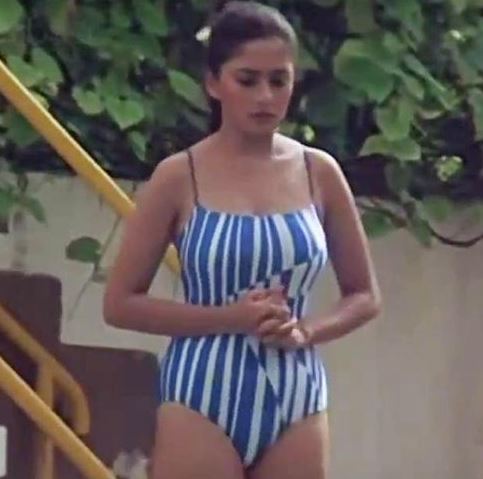 The 90s was influenced heavily by the famous American series, Baywatch. Swimwear became about the sport, not about casually lounging around a beach. The looks became unadorned but yet attractive. The single piece bikini made a comeback but the bodies were super toned compared to the earlier decades. High-leg swimsuits became trendy with a peek of the cleavage.

Both the actresses of the movie Baazigar, Kajol and Shilpa Shetty, sported Baywatch style printed monokinis. Size zero was not a thing yet, but having a fit body was given much more importance. Also, the same style continued throughout the nineties with actresses like Juhi Chawla and Urmila Matondkar sporting ’em. 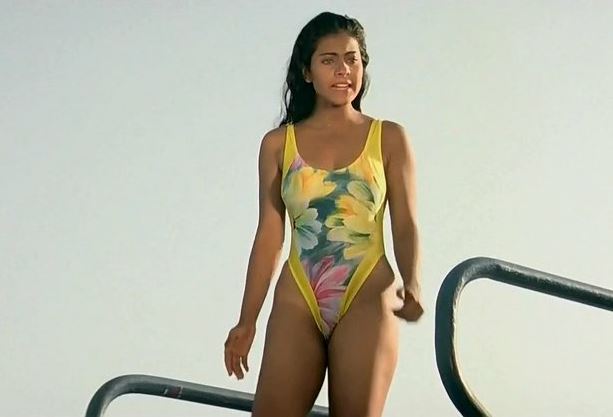 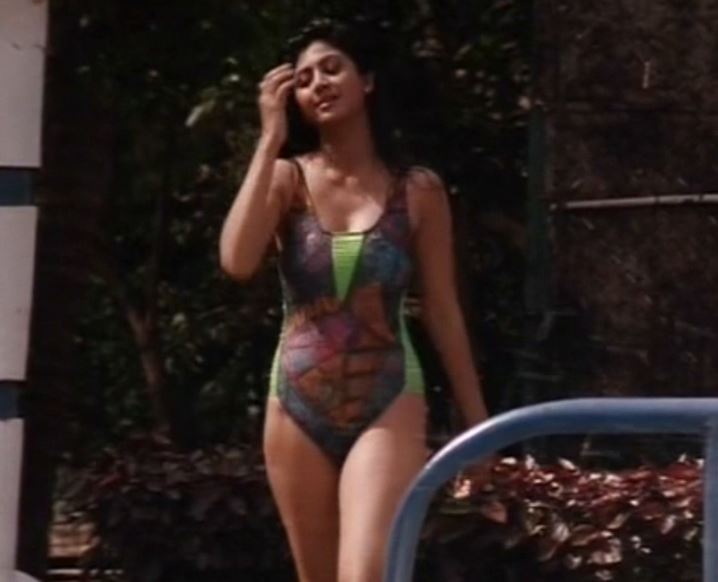 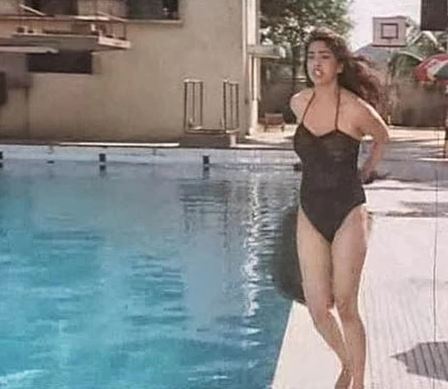 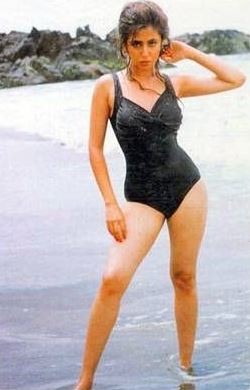 The decade of sporty pool-wear gave way to the glam, sensationalist naughties. Too much of experimentation was done with the Bollywood bikini. From metallics to prints to donning makeup, the list is endless. It was quite funny to see them onscreen, too. The string bikinis became popular along with hardware details like links and stones. From Minissha Lamba to Bipasha Basu to Tanisha Mukerji, almost all the actresses sported the skimpy string bikini. Some of 80s Bollywood bikini was back. The looks were created for photoshoots but not to take a dip in the pool.

The 2000s also saw overdone accessories like multiple necklaces, cuffs, bracelets, finger rings and what not. Amrita Arora wore heels with a bikini. The 2000s missed the definition of swimwear, completely. The tacky makeup told the viewers swimwear is not functional to take a dip in the sea but only meant to be eye-candy in the movies.

And the bikini had to be sported with a perfect body. There was no room for extra flabs or fat in the body. Such a siziest era. Of course, Kareena Kapoor popularized “size-zero” and made it worse. The decade did play an important role, however. With major Indian female celebrities sporting bikinis either in the movies or in a photoshoot for magazine editorials, the clothing item became a rite of passage for Bollywood actresses. 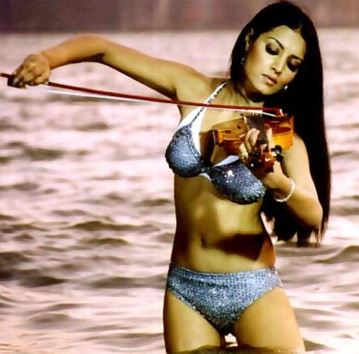 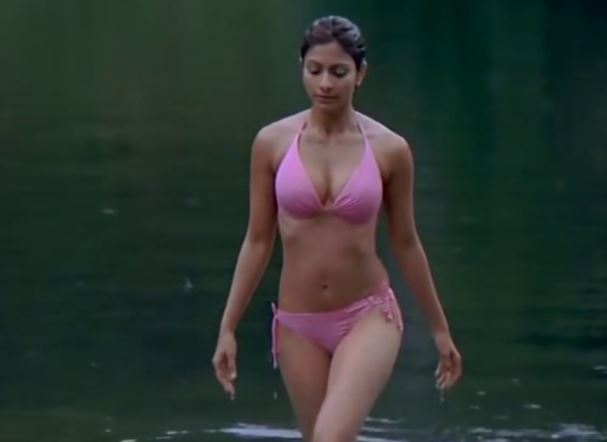 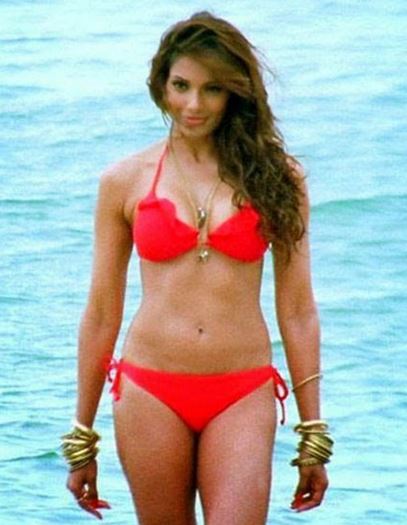 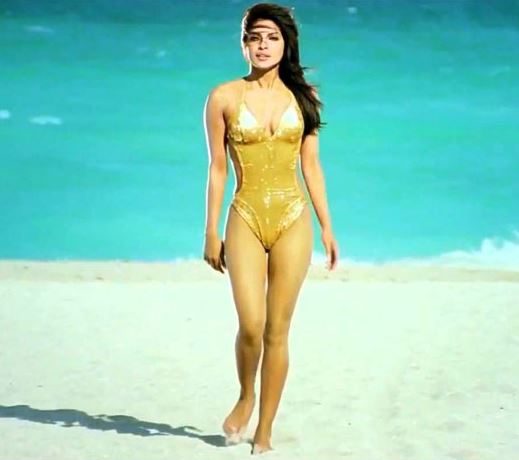 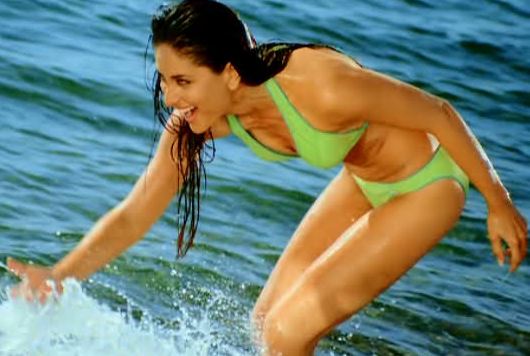 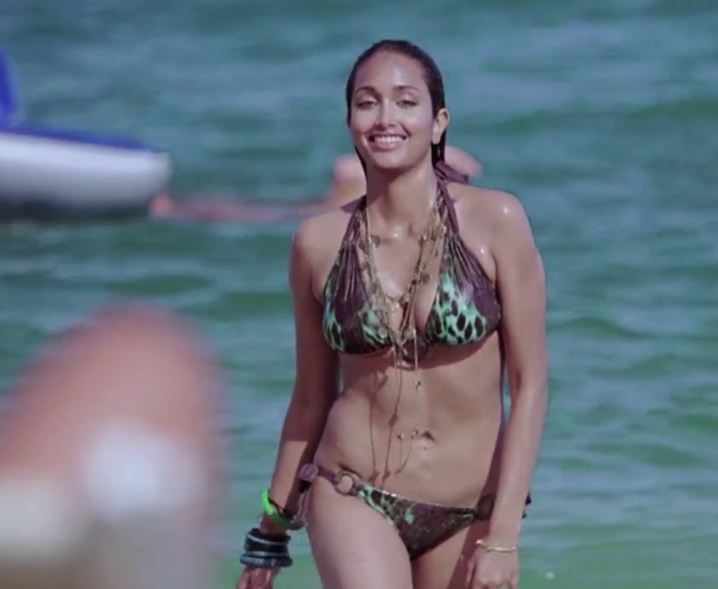 In the early 2010s the concept of feminism started to be taken seriously. So, this is an era where actresses are actually wearing what suits them without over accessorizing or succumbing to trends. Whether one is curvy or thin or fat, everyone are donning them with confidence. It is also the decade where wearing a bikini is no longer a big deal. Bollywood is helping normalize sporting one onscreen or off screen. A sculpted model-like body is neither unnecessary nor apologetic, everything is okay.

For example, Alia Bhatt donned a bright yellow color bikini in the movie, Student of The Year. She sported it with all ease and no abs. Also, Shraddha Kapoor wore a bralette top paired with a sarong and looked fabulous. And one cannot miss, Anushka Sharma’s sports style bikini in the movie, Jab Tak Hai Jaan. We guess the decade of empowerment through fashion is really here in India. Hope we never go back to the dark ages of having to wear something just because you’re expected to!! 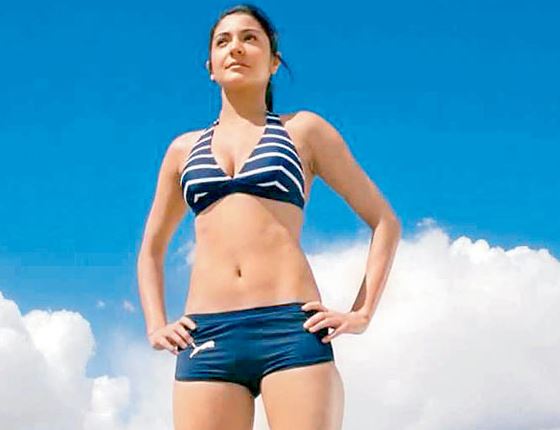 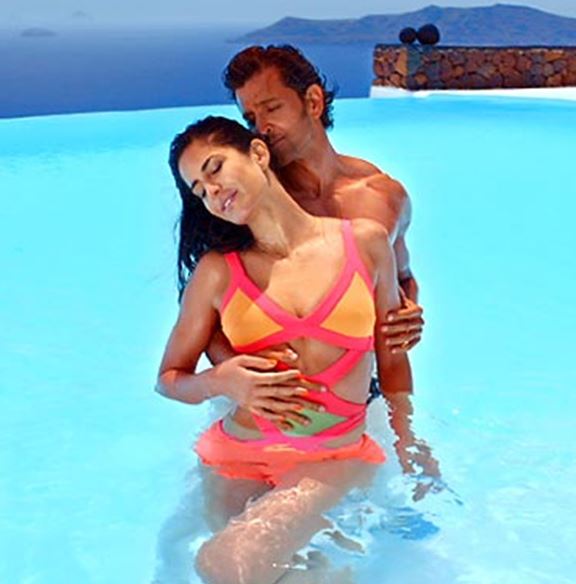 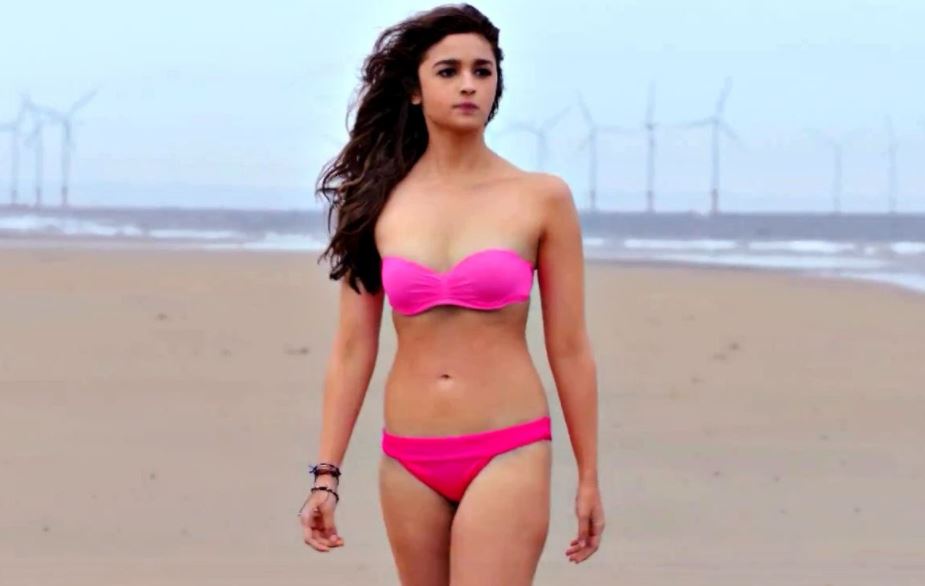 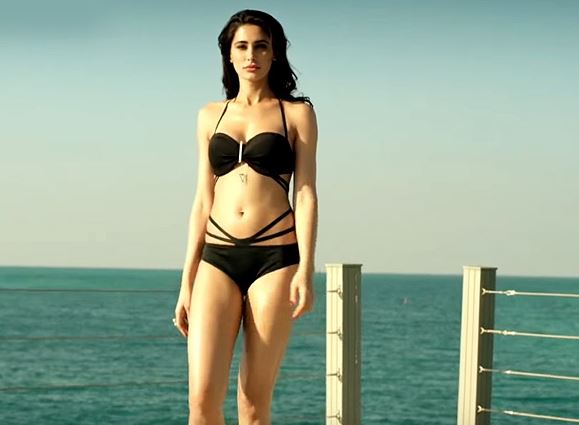 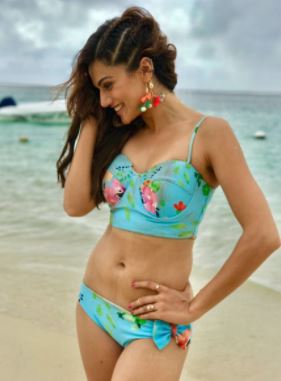 So, did you love the evolution of Bollywood bikini styles? What’s your take on it? Let us know by tweeting @shilpa1ahuja!