I’m a huge believer of all things astrological and spiritual. Whether it’s zodiac horoscopes, lucky stones and numbers, moon signs and of course, birthstones. I owned many lucky crystals and gemstones and a ring with a blue topaz – my birthstone. I can’t say for sure that it changed my life or anything like that but wearing it made me feel optimistic and fearless and I never took it off. So, if you’re a believer, find your birthstones by month below and read all about them!

Precious stones and gems have been around since ancient times. They were worn to show authority, power, wealth and status. But birthstones weren’t a thing until 1912 when the National Association of Jewelers in America assigned a gemstone for each birth month of the year. Legend has it that these stones contain therapeutic and healing powers, which are heightened when one wears their own birthstones by month. Surely, it’s one of the most successful business strategies ever, and the precious and semi-precious stones become even more coveted! While their powers will continue to remain doubtlessly unproven, we certainly love a precious rock on our fingers! These birthstones come in a range of colors and can be worn in the worn of pendants, earrings, bracelets or as rings, being the most common. 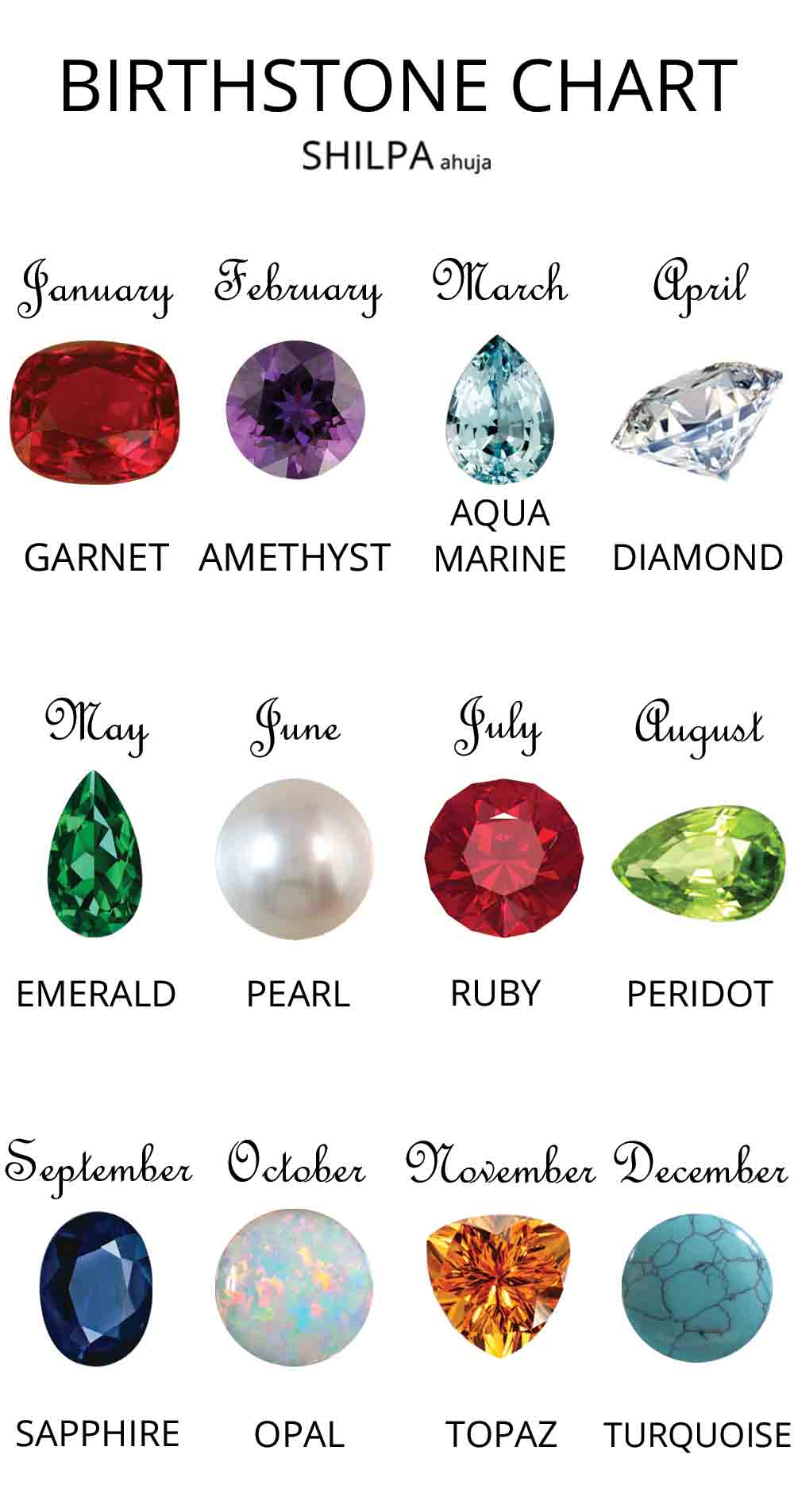 Read all about the history, importance, powers and benefits of each of the birthstones by month below! 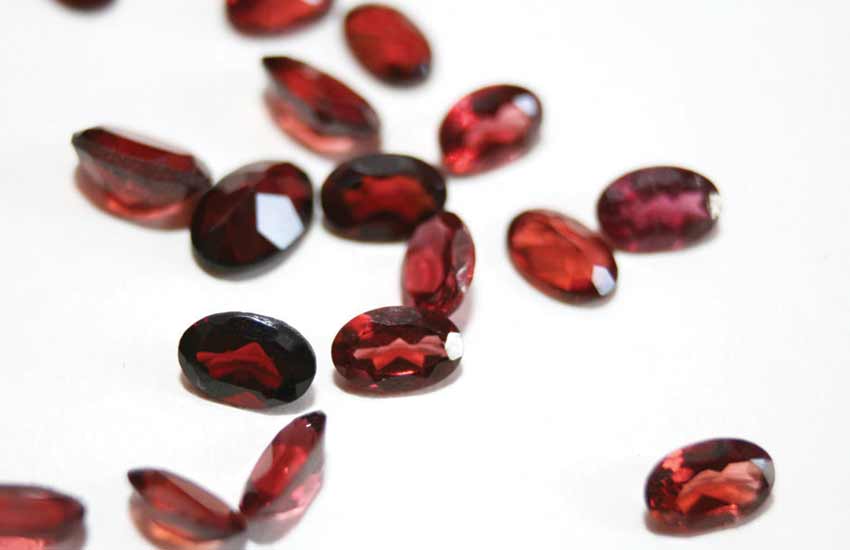 If you celebrate your birthday in January, your birthstone is the gorgeous garnet! The name of the stone is derived from a latin word, garanatus, which means seed-like, as it resembles the bright red seeds of a pomegranate. It’s believed that the stone will bring peace, prosperity and good health to its wearer. It was worn by warriors as protection and to be warned of any oncoming danger. It was said that if a garnet loses its shine, bad things are coming his way. The stone also stands for friendship, making this a perfect gem to gift your friend. Also, being very durable, this stone doesn’t require much cleaning or care. 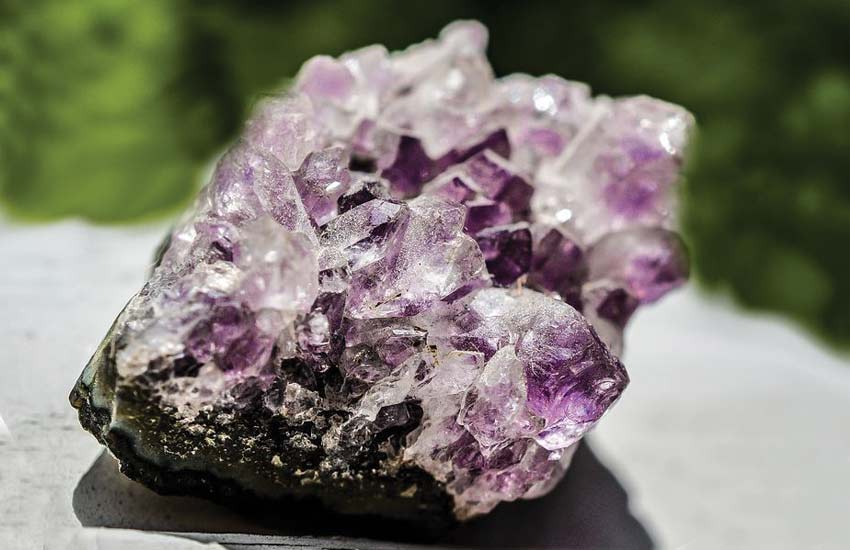 Born in the second month of the year? The royal purple amethyst, a type of quartz, is your stone. It was the stone of choice for every king and queen’s crown and scepter. Also known as the bishop’s stone, it’s worn by catholic bishops on their fingers to this day. The name is derived from a Greek word, amethystos, meaning sober and it was said to prevent its bearer from getting too drunk. It was believed that if one drank from a goblet made entirely of amethyst, they would never get intoxicated! The amethyst also stands for royalty and humility. Wearing amethyst is also believed to protect its wearer from evil and helps battle headaches, stress and anxiety. 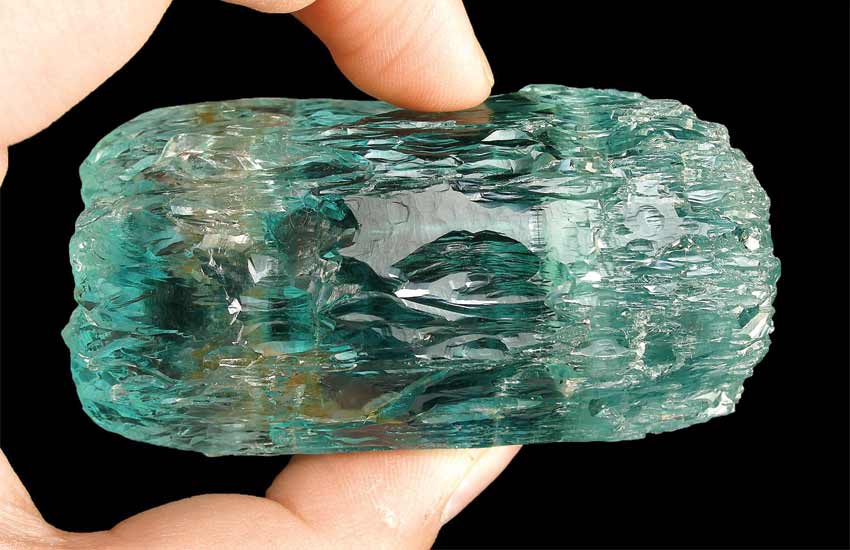 The birthstone for March is the light blue aquamarine. It derives its name from the latin words aqua and marina, meaning water and sea, due its cool and clear sea blue color. It was worn to bring safety to sailors at sea. Apart from aquamarine, bloodstone, a dark green stone with red spots is also associated with this month. It’s also known to rekindle old or lost love and bring happiness to marriages and relationships. For those lucky enough to be born in April, the stunning diamond is your birthstone. This prized precious stone is the hardest naturally occurring substance known to mankind. The name comes from the Greek word, adamas, meaning invincible, as they cannot be destroyed easily. History claims that diamonds were made by lightning bolts and that they’d bring strength and clarity to the wearer. It also symbolizes beauty and eternal & lasting love. Also known for their sparkle and luster, and thanks to De Beers’ slogan since 1940s, “a diamond is forever”, they’ve been the stone of choice for engagement rings for brides and grooms since the 1900s! Emeralds, the birthstones for May stand for youthfulness and good fortune and are also a symbol of rebirth. It’s derived from a word in Greek called smargados, which means green color. These rich green stones were valued greatly in Egyptian cultures, so much so that they’d bury mummies with this stone to represent eternal life. These gemstones also contain the energy of the planet, mercury and gives its bearer immense emotional strength. 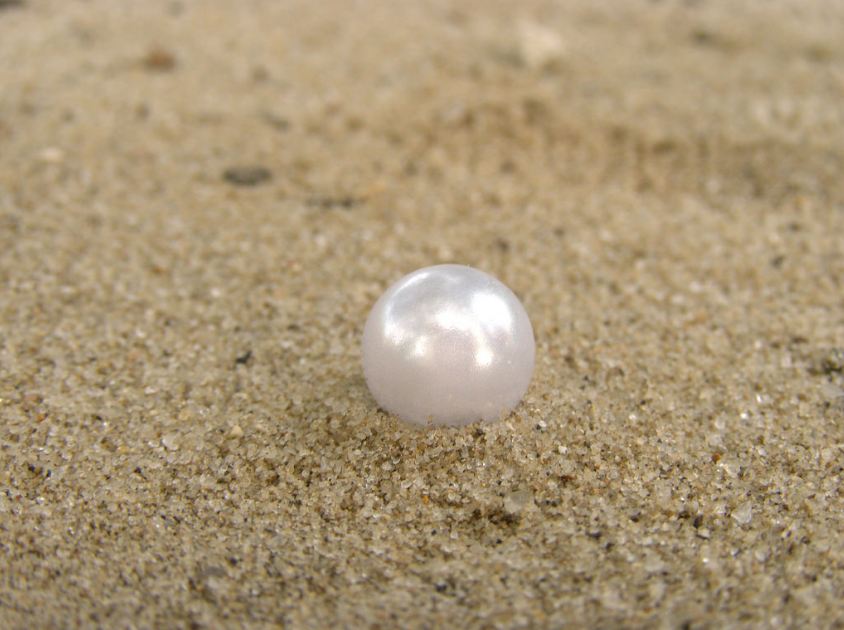 The round, smooth, iridescent and lustrous pearl is June’s birthstone. These gems are formed in the shells of mollusks. They are quite delicate so extra care when handling is important. It’s a symbol of purity and often favored by the rich and elite. The pearl is also the only gem created by a living creature. Also, alexandrite, a stone which changes its color under different lighting (how cool?!) is another colorstone for this month. 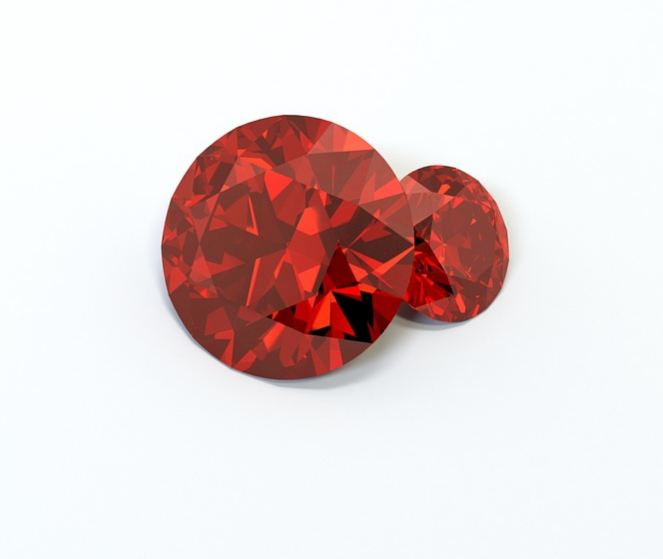 Prized for its rich red color, the ruby is July’s birthstone by month. Also known as the king of gems, rubies bring wealth, success and love to its bearer. They’re the stones of love, passion, energy and power. They also have the power to put an end to disputes between lovers. Wearing this blood red color stone will help you get through life without any worries or fear. The peridot, birthstone of august is a unique gem found in lava and meteorites. This stone is a powerful amulet and is worn to keep all forms of evil away. This lime green colored gem can also keep nightmares at bay. The Egyptians called it gem of the sun and this stone often graced Cleopatra’s neck and hands. 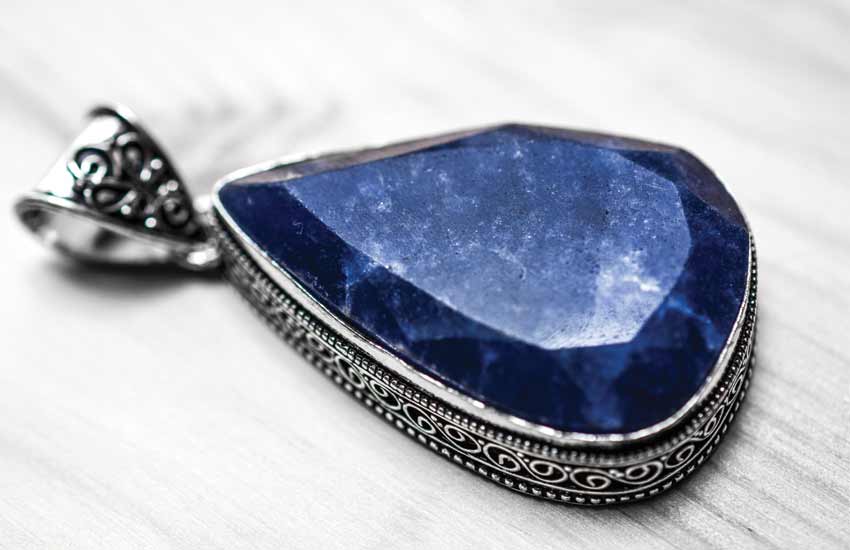 As the birthstones by month for September, the deep blue sapphire symbolizes honesty, sincerity and constancy. Its translation in various languages means ‘dear to the planet saturn’. Ancient Persian rulers believed that the skies appeared blue because of the reflection of sapphire gems. It’s also said that the mere sight of this birthstone will bring luck to the beholder. Also called the king of blue gems, sapphires also stand for romance, devotion, faith and spirituality. This powerful stone is also believed to keep depression away. 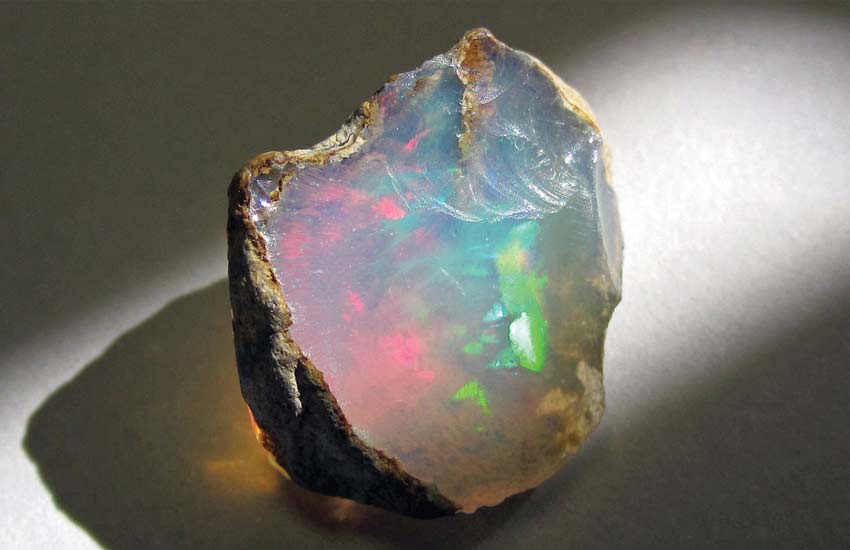 Opal, October’s birthstone by month is a white stone with a holographic effect. For many many years, this stone was wrongly believed to be evil. But as time passed, beliefs changed and the black opal was and is one of the top most expensive gemstones in the world. And believe it or not, this beautiful stone is created by rain. This stone is called as the queen of gemstones because of the kaleidoscope of colors within it. In fact, you can see the colors of almost every other gemstone in existence inside of an opal! This stone will amplify its wearer’s traits, whether they’re good or bad. If these aren’t enough reasons to convince how special this gem is, it was also Queen Victoria’s favorite stone to wear! 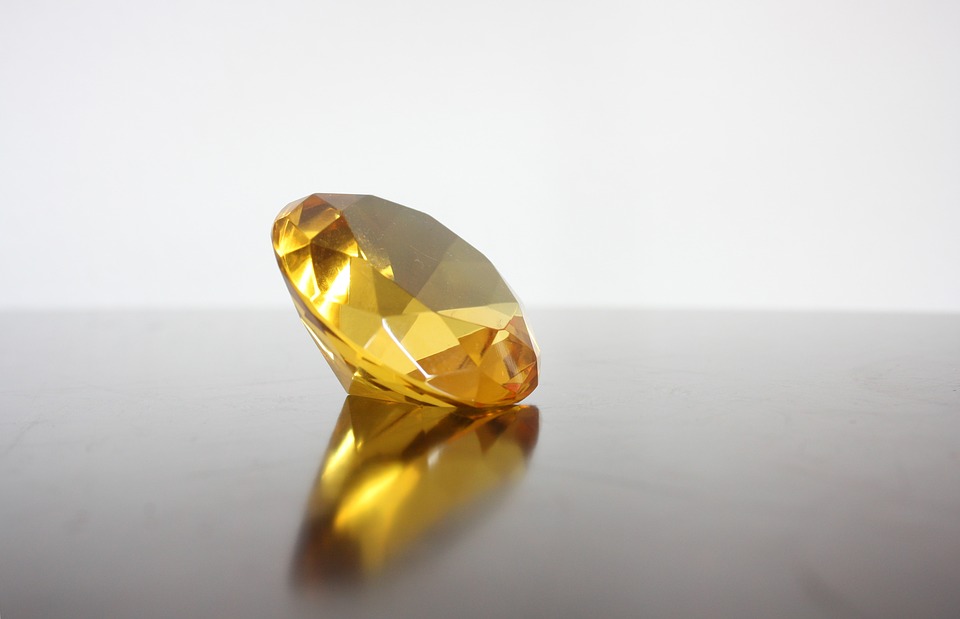 Yellow or gold topaz and citrine are the two birthstones for November. In ancient times, it was used to figure out whether any food contained poison or not. This valued topaz stands for patience and love. It’s also thought to help with mental ailments and remove all forms of negative energies. And citrine, another one of November’s birthstones by month is known as the gem of optimism and is believed to fill your life with nothing but happiness and love. 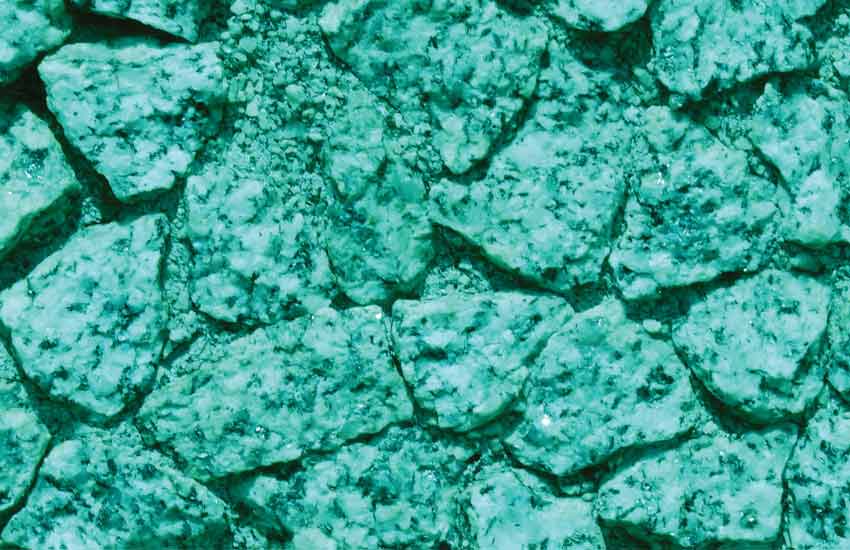 Born in the last month of the year? The turquoise, one of the oldest known gemstones, is your birthstone. Between pharaohs in Egypt and the chiefs of Native American tribes, this stone played a significant role in many cultures. It was believed to promote spiritual clarity, bring good luck and help you find the greater meanings of life.

This blue colored is also thought to induce sleep, ward off evil and keep all darkness away. Special care is required for turquoise as it is porous and can absorb anything it touches. Be careful with perfumes and creams, ladies! Named after the place where it was discovered – Tanzania, tanzanite is a recent addition as a birthstone for December. This month also has a third stone, which is blue topaz.

So those was our guide to birthstones by month! Do you also believe in wearing birthstone colors? Tell us your thoughts by tweeting @shilpa1ahuja!

1 thought on “Birthstones by Month: Find Your Birthstone Colors in Our Chart!”