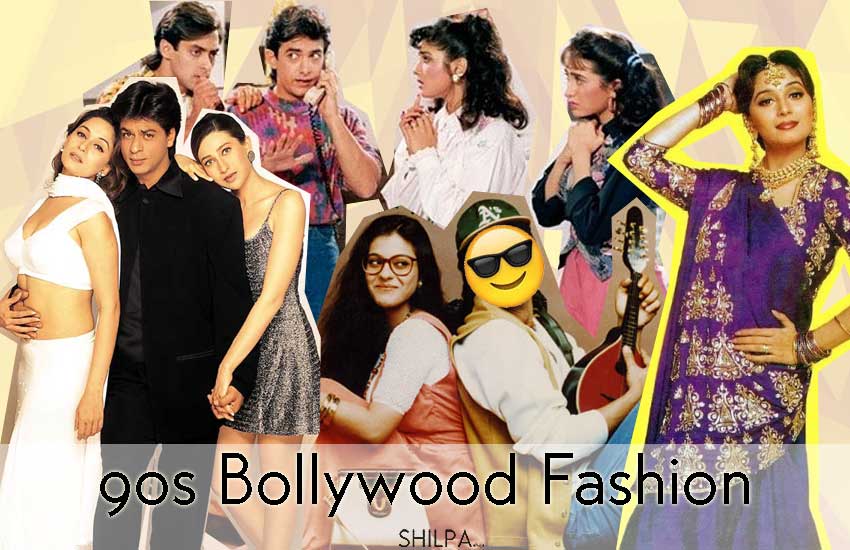 From my previous post on Female Bollywood characters we connect with, you guys already know how much of a bollyholic I am! So after watching a movie, the characters and mood stays with me. Sometimes I even dress up like the characters I saw in the movie. Right, laugh! But I can’t be alone!

Bollywood movies are the trendsetters when it comes to fashion in India. And 90s Bollywood fashion is iconic, a milestone in itself. 90s was the era which brought in the Manish Malhotras and Sabyasachis into Bollywood and has us all copying their looks!

I grew up watching Kajol, Juhi Chawla and Aishwarya Rai in the movies. I used to try to dress up like them or their hairstyles as a kid. Of course, our mothers, too, would take cues from the 90s Bollywood fashion. This is the impact Bollywood has had on our fashion!

A few disastrous styles gave me an eye attack! Ouch! that hurts! While we had fashion icons, we also had faux-pas and terrible taste!

So, we have listed the best and worst 90s Bollywood fashion for you! If you’re a 90s kid, be ready to get nostalgic! (Sigh! I can’t believe it’s already been mojere than a decade since 90s!) 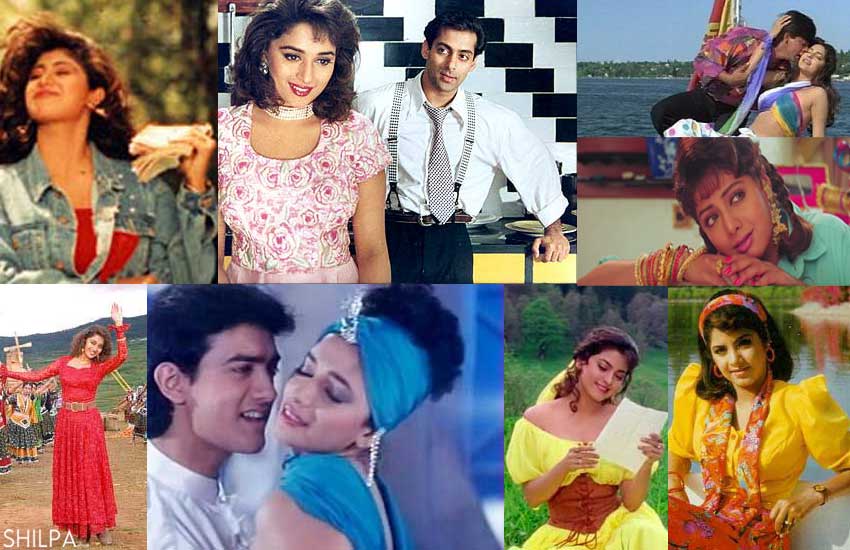 So, let’s discover the best and worst of early 90s Bollywood fashion.

As there was no concept of a fashion designer or a personal stylist back then, costume designers took off the plane and crashed it smoothly, too! Here’s some of the most unwearable fashion that Bollywood has ever shown!

Headbands, large hair bows and costume – with big sequins were too much to take. And you can’t miss Madhuri Dixit’s bright colored ribbons in Dil! Add large hoops and expression to complete the look!

Also read: All about 90s jewelry trends: what’s back and what’s not!

I have nothing to say! Really, what is this?!

Shine, shine and more shine! My expression is exactly same as Raveena’s in this picture.

Only Shilpa Shetty can pull it off!

Puffed sleeves were a trend back then even in Hollywood! But Bollywood movies took it to another level by incorporating these in ethnic wear – saree blouses and kurtis!

Midi skirts were huge in the 90s. Especially the badly fitted ones! And Raveena Tandon, weren’t you playing the role of a rich man’s daughter? You look like a maid, in that skirt! But surprisingly Karisma Kapoor’s sporting some trendy – looking culottes. Also! Don’t miss Salman’s hilarious trousers. And we wanna see Aamir in that shirt now!

That hairstyle! And those sunglasses randomly picked from Chor Bazaar. Really, Madhuri?

Fashion disaster at its best!

Somehow there were still a few styles we’re still loving. In fact, some of the dresses from late 90s went on to become the most iconic Bollywood costumes. Let’s take a look!

The red lace dress worn by Madhuri Dixit in ‘Hum Aapke Hain Kaun’ became something of a wardrobe staple of stylish young girls!

Chokers were a thing! Glad they made a comeback in 2016!

A bold look, but Juhi Chawla in Darr made it all fresh and feminine by sporting a corset belt.

The off-the-shoulder tops made a great casual look. These, too, have made a comeback now. I love how Juhi has paired it with another corset belt. The perfect 90s vacation outfit.

It all started with Madhuri Dixit’s legendary purple saree. We adore the look, by the way! Fashion became a serious business in Bollywood in the late 90s. We saw fashion designers like Manish Malhotra who brought a revolution in Bollywood movie fashion. He introduced international designer brands and top trends in Indian cinema.

This was a welcome change, but of course, we can’t ignore a few disasters either.

So, let’s discover the best and worst of late 90s Bollywood fashion.

Kajol’s expression in the picture says that she too has no idea why her jeans are riding up so high! You can never woo a man like this! You will scare him away.

Too much gold and shine! Why, Kajol, are you so obsessed with a gold lehenga and pairing it with gold accessories, too? What on earth, you were thinking?

Why is she wearing a dupatta? What purpose is it serving?

Too Hard to Digest

Heavily embroidered lehengas with heavy ornaments were too tacky. Thankfully, the wedding fashion in Bollywood evolved.

Off-the-shoulder tops and dresses continued to make their way in Bollywood movies. Mostly paired with jeans, considering even jeans were bold back then!

P.S. Madhuri’s expression is too funny to ignore!

The green halter neck gown worn by Kajol in DDLJ became the definition of party wear. We, too, love the dress although, she could work on her expression!

Crop tops became a thing. If the movie showed a college going character then surely, there would be a look with a crop top. And chokers continued to be seen.

The concept of athleisure started in India with the movie Dil to Pagal Hai. This movie launched the trend of wearing sportswear as a daily wear. We also loved some of the street wear fashion worn by Karisma Kapoor!

Denim on denim, too, became huge after the movie Rangeela. Urmila effortlessly pulled off the button-up denim shirt.

The traditional south-Indian silk sarees were worn elegantly by Karisma Kapoor in Biwi No.1.

First of all, thank you, Karisma Kapoor, for introducing straightened hair to us. Also, the quintessential chiffon saree Bollywood look continued in the 90s – but with better blouses. The salwar kameez were casual and wearable.

Just like the sets of Hum Dil De Chuke Sanam, the costumes of Aishwarya Rai was extravagant, royal and mesmerizing. Though they’re not for daily wear like shown in the movie, they work great for weddings and parties!

So, did you like 90s Bollywood fashion? And which look from our worst list made you laugh? Let us know by tweeting us @shilpa1ahuja.