Abu Jani Sandeep Khosla designs typically have lots of glamour and extravagance – at times feminine and at times opulent. This time, however, it seems that their designs have taken a turn that is neither.

Some of the pieces were shimmery kaftans in gold fabric draped loosely over masked models. They fell above the ankles, with a mix of sheer and opaque gold fabric, costume-like in appearance. The tunics exhibit a complete lack of structure which is difficult to place even in the 70s era when women liked to use broad belts to add shape to their garments, sometimes even went as far as making them skin-tight. Although you could compare them to men’s fashion of the middle ages. I guess the line for this would be – fabric alone does not make fashion, and title alone does not make a theme. It is the cut, the pattern that manipulates its style – that’s what makes fashion.

The show was reminiscent of 80s Bollywood in that its presentation was a performance. Fashion is an art, and Bollywood is all about entertainment. But a show does not make a collection, it is the collection that makes a show. I am wearing this dress because its fashion show was dramatic, said no it-girl ever. 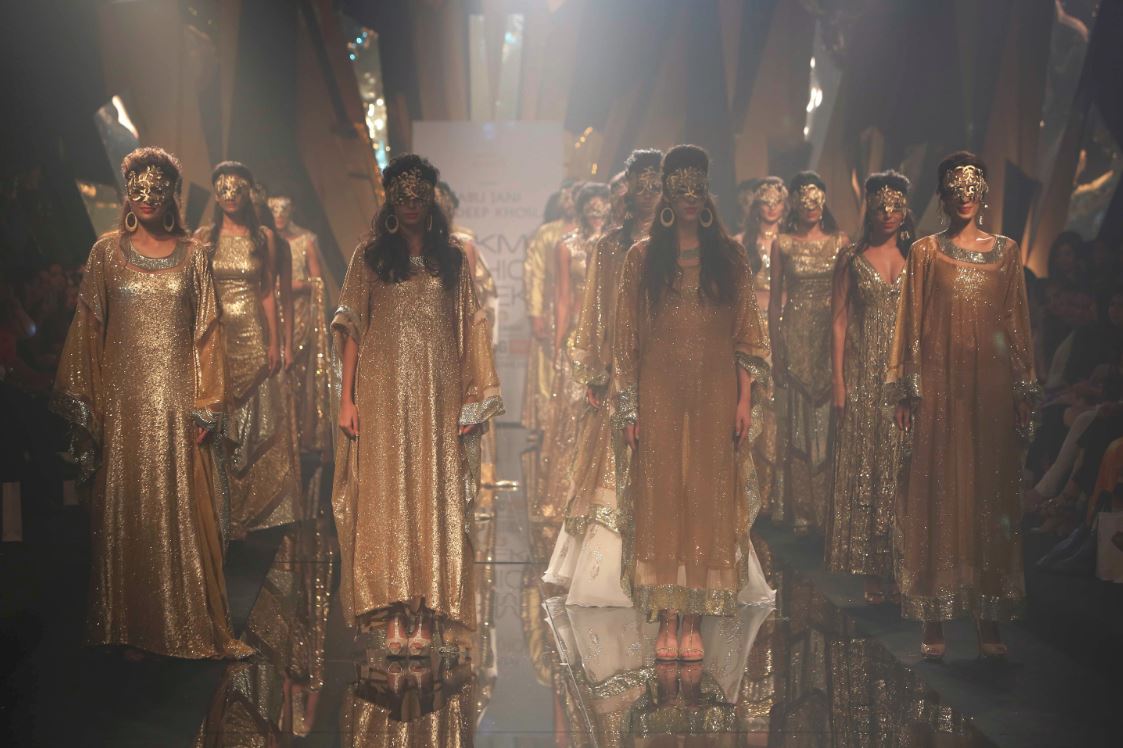 “… But a show does not make a collection, it is the collection that makes a show. I am wearing this dress because its fashion show was dramatic, said no it-girl ever.”

Other silhouettes by Abu Jani Sandeep Khosla included floor-touching gowns cinched at the waist in eggshell, off-white, grey and cream with sequins, stone-work and thead-work in gold and silver. Some were short layered dresses with flouncy skirts, some slashed midis and some ankle-length. Menswear ranged from sheer kurtas to dress-like robes to ruffled shimmery gold shirts.

Only a few were saviours. One was a minimalist collared pencil-gown in eggshell with gold sequins and a net cape (above). The model’s heavy eyebrows over overly glittery eye-shadow is an interesting take on makeup that is wearable and pretty at the same time.