Hey handsome! 90s fashion is something that all guys need to take inspiration from! Personally, I love the 90s (yeah, it’s obvious as I’m a 90s kid)! From Leonardo DiCaprio to Tom Cruise to David Beckham, the men’s celeb fashion was drool worthy! Like seriously where are the real stylish men in the millennial world today?! *gasps* Even, in the animated world, we had Dexter’s Laboratory, Johnny Bravo and The Simpsons! Now, this is getting too nostalgic. Isn’t it?

So, from evergreen movies like Titanic to the iconic music band Backstreet Boys to everyone’s beloved sitcom, Friends, the 90s was indeed a special era. Of course, there were a few funny fashion moments that we don’t wanna see again! So, as a part of our 90s series, let’s find out all about the men’s fashion and style! 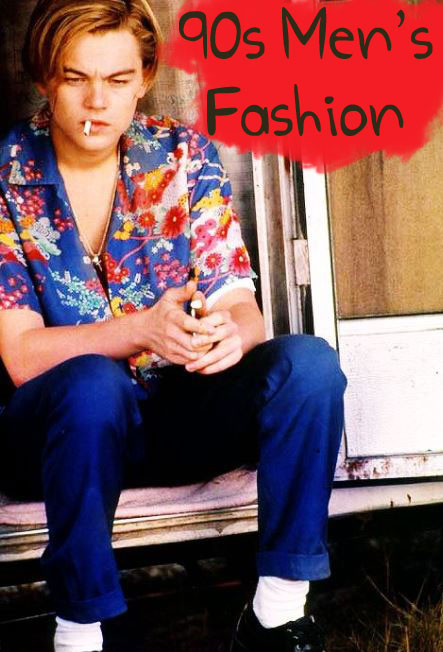 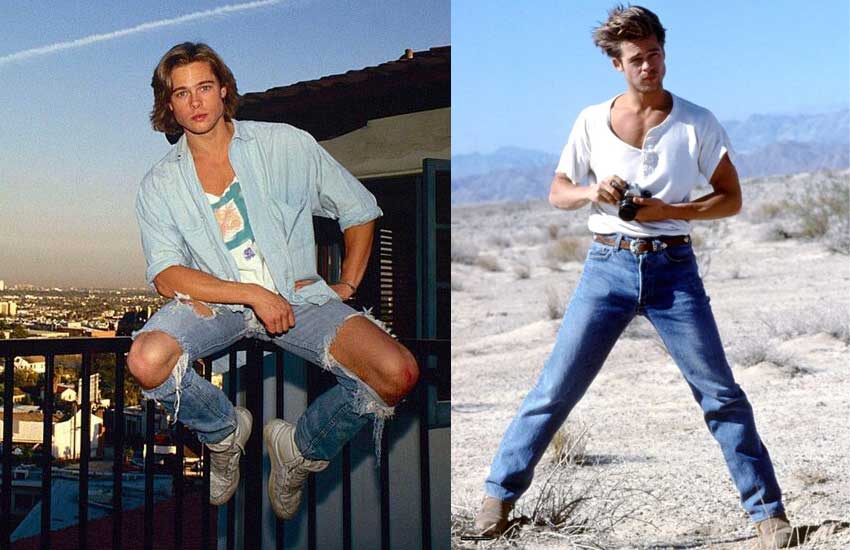 Bright colors were very trendy in 90s men’s fashion. Plaids, checkered shirts and artsy prints were the highlights of the era, unlike the 80s bold prints! Overalls ruled 90s style. Who can forget Will Smith’s look in the show, The Fresh Prince of Bel-Air?

Shoulder pads of the 70s and 80s gave way to turtlenecks! The Friends actors – David Schwimmer and Matt LeBlanc – made the turtlenecks iconic. Loose tracksuits paired with high top sneakers were a rage. Hope this trend never dies. Casual and easy! Mesh shirts, oversized shirts, denim jackets and metallic jackets too were a thing in the 90s style fashion.

Jeans ruled the 90s style fashion! Baggy jeans and folded hems were a big part of the early 90s men’s fashion. Denim on denim was a big trend too! In fact, you can wear them to a 90s themed party now! Also, classic blue high waist jeans were in vogue and they are back now! Denim jackets were also a big part of the 90s fashion. This casual yet comfy jacket was perfect for any occasion. Movies like The Shawshank Redemption and Speed made oversized long denim shirts the highlights of the 90s urban fashion. The trend of denim shirts continued on from the late 1980s, which was even featured in one of Michael Jackson’s hit music video, “The Way You Make Me Feel”.

90s fashion for men was all about looking like a rockstar! Leather jackets were a must have 90s male fashion trend, thanks to pop icons like George Michael, who started this trend in the late 80s with his hit music video “Faith” and Michael Jackson, whose supporting dancers sported them in “Bad”!

Also, the leather on leather look was popular. In fact, the king of pop, Michael Jackson, made the leather look quite popular with his stage performances! From military style jackets to plain jackets worn over plain white tee shirts, 90s pop culture was super stylish!

The two most famous 90s hairstyles were tousled, made popular by Fight Club’s Brad Pitt, and floppy hair, of Titanic’s Leonardo DiCaprio. Tom Cruise also made short tousled haircut famous in Mission Impossible. The messy grunge hair look was at its peak and Johnny Depp’s hairstyle was in vogue. Also, George Michael’s voluminous upcombed hair is a classic 90s hairstyle.

Men’s suits trends have evolved over the time but the classic black suits were really in vogue back in the 90s. From Richard Gere to Will Smith in movies Pretty Woman and Men in Black, they have popularized the 90s style fashion!

The 90s rap fashion was all about baggy clothing with chunky jewelry. Jay Z wore the oversized necklace with a dollar that was popular in the 90s black men’s fashion. The oversized rings and bracelets were fashionable. Also, the laceless and high top sneakers are back now. Wow, I’ll make sure to get my man a pair as he’s a hip hop fashion fan! The matching baseball caps were stylish, too.

The oversized tee shirts with text or graphics were the trademark of 90s hip hop fashion for guys. Also, check out Snoop Dogg’s oversized shirt by Tommy Hilfiger! The slouchy hoodie trend was set by Eminem in the late 90s fashion!

Will Smith’s look in the famous TV series, The Fresh Prince of Bel-Air, where he wore loose tracksuits became a cool 90s fashion trend. This refreshing style is making a comeback now.

The 90s punk fashion was all about overly done spikes. Check out Sean O’Pry in the movie SLC Punk where he sported the spiked hairstyle in neon green. Like really?! How did the youngsters back then think it’s cool?!

Big rips on jeans were the highlights of the 1990s fashion trends for men. The rips were big enough for a puppy to sneak in! 90s grunge men’s fashion also included pairing these jeans with sneakers or black tees and leather jackets.

The greasy, messy long hair or the the unwashed hair look was at its peak. The famous Johnny Depp and Kate Moss made it a couple thing by sporting the grunge hairstyle.

Like the messy hair, the unshaven grunge look was considered to be macho. I hope this 90s male fashion trend doesn’t make a comeback!! So unpolished. Bleh! And again, Johnny Depp made the 90s grunge style famous! Brad Pitt also sported the unshaven look in the 90s.

George Michael started the fad in the 80s, but piercings for men became an even cooler thing in the 90s. The ear piercings with tiny circular earrings were a common sight in the 90s!

The iconic rock bands set the 90s fashion trends for teenagers! From bedhead hair to logo tee shirts to leather jackets, they all made a statement. The long hairstyle or the unwashed hair look prevailed throughout the 90s. That’s gross! Eww! Sorry, rock fashion fans out there. Spiked hair also became popular.

The 90s summer fashion for men was easy and casual. From Johnny Depp’s bandanas to graphic tee shirts to mesh shirts, they were super stylish. The 90s summer fashion included loose jeans paired with half sleeved or sleeveless shirt, tight tank tops and the high top sneakers. Wide leg jeans were also still in, but not hugely popular. Hoodies and basic tees were in, too, just like rappers such as Kanye West still wear.

This decade also saw polished and clean 90s men’s fashion. Of course, that’s what preppy fashion is all about. We saw lots of refined fashion in the movie, The Talented Mr. Ripley. Loose trousers were paired with button-up shirt worn over a plain tee shirt.

Also, the classic black suits ruled the 90s in movies like Titanic, School Ties, Men in Black and Scent of a Woman! Leonardo’s looks in Titanic are drool worthy, especially the ballroom dance outfit! Brad Pitt also made vests popular with his movie, A River Runs Through It.

So, this was the complete guide to 90s men’s fashion! Are you a 90s kid? Did you feel nostalgic? Which 90s street fashion trends are your favorite and least favorite? Let us know! Tweet us @shilpa1ahuja!

– The Most Popular 90s Actresses We’re Remembering
– 90s Fashion Guide: All About 90s Women’s Fashion
– 90s Fashion Trends: 90s Are Back with These 11 Throwback Styles
– Iconic 90s Jewelry Trends
– 90s Outfits & Ideas on What to Wear to a 90s Party