From chiffon sarees to poofy sleeves, the 80s was the era of impeccable style and glam! Here’s the iconic 80s Bollywood fashion! 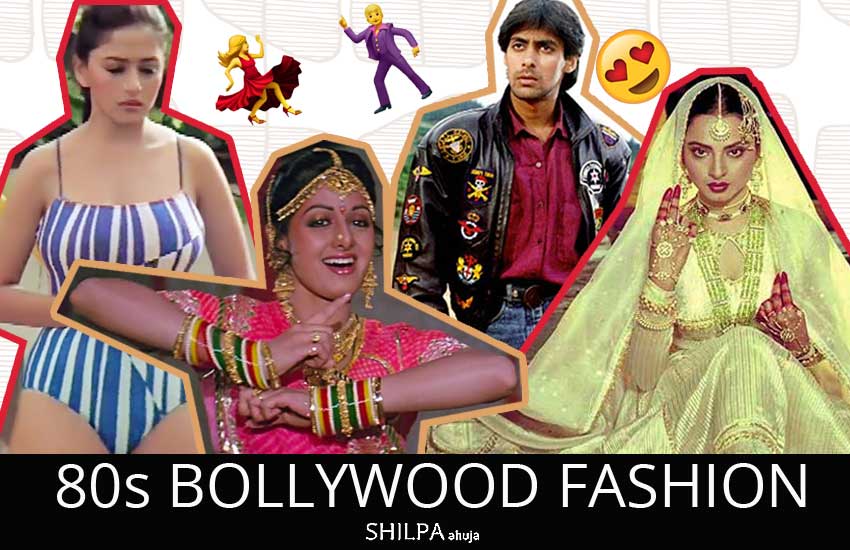 80s was the period where fashion was stylish and wearable! The bold colors and artsy prints from the 70s almost vanished, giving way to plain and chic outfits! But at the same time, we also saw decked up dance costumes with heavy jewelry and lots of bright colors! The era saw beautiful actresses setting new trends in Bollywood fashion. From Rekha’s style to Sridevi’s elegance, it was all about demure, feminine clothing!

The 80s Bollywood fashion was elegant and natural. The bold 70s outfits gave way to wearable attire. A line was beginning to get drawn between casual clothing, decked-up wedding fashion and glittery stage-show outfits.

The early 80s had movies like Karz, Khubsoorat, Disco Dancer, Silsila and many more. Actresses like Parveen Babi and Zeenat Aman continued to adorn the era with glam yet minimalistic fashion.

But it was Rekha who ruled the early 80s in Bollywood. From Umrao Jaan to Silsila, her style was impeccable. And it was the early years of Sridevi in Bollywood movies. Makeup was simple, the dramatic winged liner had vanished and nude glossy lips prevailed!

The 1960s inspired anarkalis from the movie Mughal-e-Azam were seen in the movie Umrao Jaan played by Rekha. This metallic gold anarkali paired with net dupatta and gold jewelry looks so gorgeous. And the red glossy red lips complement the look!

Shiny costumes were the highlights of the early 80s Bollywood movies! From Parveen Babi to Rishi Kapoor, all the superstars wore the metallic outfits. But the best is the one by Mithun Chakraborty from the movie Disco Dancer! *hums I’m a disco dancer.* 😛

Wearing double braids was common in 70s and continued in the 80s Bollywood movies, too! Rekha in Khubsoorat and Sridevi in Tohfa set trends for the young women.

So, the 90s Bollywood fashion took inspiration from the 80s and made fun of itself by wearing exaggerated hair accessories! Compared to those, in the 80s, the hair accessories were interesting and stylish, too! Like Parveen Babi’s golden headband, Zeenat Aman’s beret and Sridevi’s matching headband with net details!

I’m quite impressed with early 80s Bollywood fashion! The exaggerated gold jewelry went on to be a trend in the later 90s, too. And even in the 80s, it was heavy but limited to ethnic festive songs, showing the celebrations. Also, check out the multi colored chunk of bangles that ruled until the early 90s.

Printed sarees made a statement back in the 80s, thanks to Bollywood fashion! From chiffon to satin silk, they all looked elegant!

The flared pants and polka dotted shirts of the 70s gave way to feminine styles. Midi dresses became a thing of the 80s Bollywood fashion. But belted midi dresses surely were head-turners. From Tina Munim in the famous Karz to Hema Malini in Satte pe Satta, they looked as trendy as ever. And Sridevi’s funny moves here shows how happy she is wearing one! And Rekha is dancing all by herself out of happiness.

Plain well-fitted salwar sets became a rage in the early 80s. A plain salwar and kameez was paired with a printed dupatta or a waist coat. Sequin embellished ones, too, made a statement!

The late 80s Bollywood fashion continued with simple makeup looks of the early 80s. It was in this part of the decade that Bollywood’s quintessential chiffon sarees became more popular and some actresses made ’em their signature looks! The chiffon sarees were trendsetters in the late 80s worn by Sridevi in movies like Chandni and Mr. India. These sarees continued in the 90s, too!

Personally, I’m not a fan of the glossy lips! But lipsticks in the 80s were really glossy. Shades of pink and bold red were a hit amongst the top 80s Bollywood actresses!

Rekha and Sridevi’s sexy chiffon sarees made a statement in movies like Chandni and Silsila that continued to rule in the late 90s, too! They worked perfectly for the hot, sultry songs and became a Indian fantasy attire!

Loose slouchy tops were stylish in 80s Hollywood fashion, too! And even in Bollywood, this comfort clothing was a fashionable trend that’s making a comeback!

The rugged jeans and biker leather jackets became a huge trend when Salman Khan wore them in Maine Pyar Kiya! Also, check out the cool patchwork details. I feel Salman Khan was quite a stud in the late 80s. What happened to you now, Salman?

Midi skirts were the typical attire of young Bollywood heroines that continued in the early 90s Bollywood fashion, too! From Sridevi in Mr. India to Bhagyashree in Maine Pyar Kiya to Amala in Pushpak, the midi skirts were a common sight. They were so trendy back then, I could spot girls wearing them to wedding receptions, too, in my parents’ marriage photo album!

How can any decade be complete without worst fashion blunders in Bollywood? 80s Bollywood movies, too, had its worst moments! The 80s saw many iconic Bollywood costumes that continued in 90s, too! But we can’t ignore the fact that the costumes were too funny! From shiny metallic dresses to temple style jewelry to men’s flared trousers, it’s hilarious to see them now!

Madhuri Dixit is still known for her moves in the song “ek do teen” from the movie Tezaab. I couldn’t take the very obvious curly hair extensions and the shiny jewelry, but the fringes stole my attention. I love Madhuri but she had hilarious hairstyles back then. They need their own article!

I literally ROFL seeing Sridevi like this! Those cat eye lenses, super glossy lips and matching silver jewelry. Please waste some time of yours by re-watching this movie!!

PS: I also want to meet Amrish Puri’s costume designer for this movie!

First of all, this movie was ahead of its time though impractical but showcased a strong women’s character. The protagonist played by Rekha changes herself into a model in the second half. But she looked so funny with that haircut, super arched brows, metallic eyeshadow with metallic outfits. Staaaphhhhh! My eyes really hurt!

I salute the costume designers back then. Too much creativity. Gold, gold everywhere. And check out Jeetendra’s expression!

So, these were the 80s Bollywood fashion. Which one did you love the most? Do you want to see these trends to make a comeback? Let us know! Tweet us @shilpa1ahuja!