60s fashion was so diverse – swinging from elegant dresses to mini skirts to hippies. Let’s hop on the time machine and discover the colorful fashion parade that is the 60s trends in makeup, accessories and more.

Introduction to the Decade and the 60s Fashion

1960s was a time of geographical tensions between US and the Soviet Union. But even amid the Cold War tensions, people managed minimal fashion and charmed with sophisticated wear. This was the decade of the British invasion in terms of culture, music as well as fashion. England had become the city for fashion, leaving New York or Paris behind. 60s were also the time of Beatlemania. The Beatles and the Supremes dominated the pop culture with their hit records. The Supremes embraced their true selves and became an inspiration to the next generations at a time where black celebrities were rare. The 1960s were a rollercoaster ride. The world had become a terrifying place and everyone was horror-struck. Great influential men such as Martin Luther King Jr. and John F Kennedy were assassinated. On the good side, we had our first men in space and on the moon and many unimaginable achievements. On the other hand, joy and colors filled England especially the Carnaby street. It was screaming new fashion trends in the 60s. The decade was a vibrant adventure for fashion.

60s fashion was fast paced. It was divided into the early 60s, mid 60s and the late 60s. Fashion broke all gender boundaries. And plenty of innovative textiles, patterns and silhouettes were seen throughout the decade.

The early 60s fashion was a continuation of the 1950s. Women mostly wore the slim boxy shift dresses in calm and bright colors. And slim skirts that would go down to knee or calf.

The iconic two-piece Chanel suit set had seen many variations. Fashion icons like Jackie Kennedy and Ingrid Bergman were the part of the working class who were also fashionable and trendy. They popularized clothes that were comfortable and easy to move in. The two piece swimsuit became a popular beach outfit. The first movie in the James Bond series Dr. No (1962) set this trend with its famous belted bikini look.

Women also wore knee-length or calf-length A-line dresses. They were inspired by the cinched-in waistline, Christian Dior’s New Look, which first came up in the 1940s.

The mods emerged from the mid-1950s. And they used to listen to jazz music. This came into the limelight in the 1960s, which became the era where people embraced their individual self. Men started giving a lot of attention to fashion too. They wore slim suit with thin ties, rode Vespas. Eventually, men’s culture influenced women too. They also dressed themselves in suits. Eventually, this was followed by the discovery of the mini skirt by Mary Quant in the mid-1960s.

She saw that the women on the street were stitching their skirts shorter. This is how the iconic mini skirt was born. Miniskirts then became a craze among teenagers, young adults and fashion lovers. This era was a time travel back to one’s childhood.

It was playful, innocent and colorful. Women preferred to dress like a child. Twiggy, the 16 year old supermodel portrayed the mod look perfectly. Her body frame flattered the 60s fashion trend. She showcased a wide variety of 60s fashion and has been an inspiration ever since. From the Chelsea look to shift dresses to menswear as well, she pulled it all off.

People also saw variation in clothes like metallics or sequins. So this era is also known as space age. In 1966, The Supremes performed at The Hollywood Palace, wearing stage outfits that had iconic sparkly looks, and popularized these trends even more.

Metallics also made an iconic appearance in Barbarella, a sci-fi movie where Jane Fonda played a superhero sent by earth on a mission. Futuristic, glossy, chic and yet having that 60s ting in them were the themes of her costume. Metallic colors are mostly used. And of course her bouffant hair.

The miniskirts reached the maturity stage, and the rich had already declined it by the end of the 1960s. This era is related to drugs. One of the most used drugs of those times was LSD. Drug users hallucinated about a colorful and flowery world. This is how the psychedelic fashion came into being. The colors used in the outfits were slightly contrasting and apparently looked like the visual sketch of an LSD tripper. 60s fashion became even more colorful and brighter. Long dresses with paisley prints and patterns were the new hip of the era.

Maxis, palazzos, and bell bottoms became very popular. We can also see influences from various eras like Victorian, Edwardian, and Indian in this trend. The Beatles visited India in search of peace as a way to escape the horrific world.

The idea was to create big and childlike eyes. Women tried to create eye lids with a lot of space by shaping their eyebrows highly arched. They gave their eyes a round shape by drawing an arch at the deep end of the socket with an eyeliner.

The upper lashes are attached with big false eyelashes. And false eyelashes were drawn with a pencil eyeliner on the lower eyelids. People also started drawing floral designs or stars on their faces by the end of the decade.

Hair in the early 60s was big, elegant and smooth. The hairspray is used to set the hair at a fair amount of height. Hair rollers were used to curl or flick up at the end. It was famously called the bouffant.

Brigitte Bardot popularized the beehive look. The hair was set dramatically high like a conical shape. Later came the Vidal Sassoon’s iconic geometric bob or the pixie cut. Moreover it was very comfortable, childlike yet chic and easy to handle. The late 60s saw natural, loose long hair or the Afro hair.

Other Trends of the Decade

Movies and music have popularized numerous 60s fashion trends. Monochrome pastel pink suits, bermuda shorts, bikini, belted shirt dresses were some of the famous 60s trends. And other cloth and fabrics experiments seen were plaid, fringes, leather, and crochet was one of the biggest. Turtle necks made a bold appearance during the protest season.

Cinema : A Fun Mix Of Elegance, Fantasy and Sci-fi

1960 was the year of many fashion influential movies. One of the most adored Marvel character and cartoon, Spiderman made his debut in the amazing fantasy #15 comics in 1962. Color palette of the costumes includes red, blue and a little black. And the pattern on it is similar to a spider web. This has been the standard costume till date but it keeps evolving. 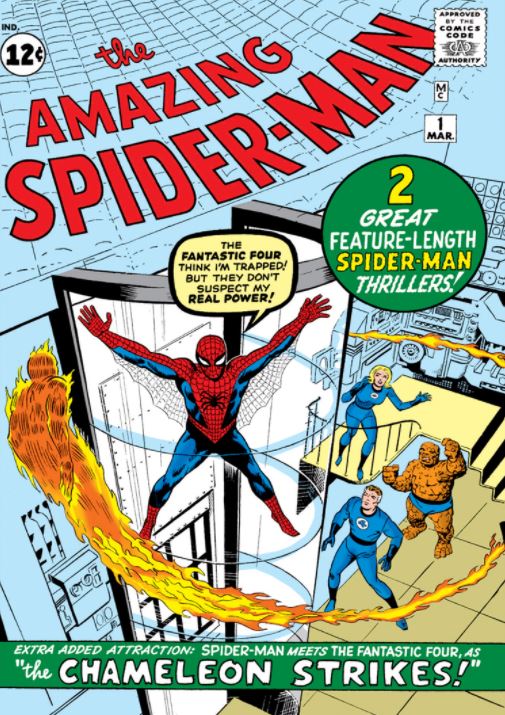 Audrey Hepburn created the ultra-feminine look with her iconic Givenchy little black dress in the film Breakfast at Tiffany’s. The black satin floor length gown, accessorized with a pair of gloves and a pearl necklace thus famously became the Hepburn style.

The famous series Star Trek started in 1966. It was all about space adventures and also was one of the favorite TV shows of the 60s kids. The costumes for this series were creative and way ahead of the time. It showcased a wide variety of fashion such as backless and asymmetrical jumpsuit, metallic bodysuits, floral dresses and many more.

Jane Birkin had the perfect 60s fashion look. Her style and her infamous basket were the talk of the town (above). She carried a basket instead of a bag because supposedly a basket could fit all her things. From shopping to dates, she carried it everywhere she went. In 1966, she acted in a movie called Blow Up, inspired by a photographer’s life in the swinging 60s. And a lot of popular trends were shown in the movie.

Another fashion icon, Sophia Loren is an Italian actress who started her international career around the early 60s and gained a lot of popularity around the world. From a normal pair of jeans to ball gowns, she was an artist who would wear anything and still made it look good. Her cat eye makeup from the movie Arabesque was iconic, mature and yet charming.

The Nudie suit designed by Nudie Cohn for a country and rock and roll musician Gram Parsons is one of the most iconic looks in the 1960s. This custom made suit had motifs of nude women, marijuana plants and poppy flowers. Famous icons such as Elvis Presley, Post Malone, etc. have also worn variations of this suit.

The Supremes were and still are beautiful singers and such empowering black women. They believed their fashion and gowns are as important as their music. So they showed a variety of outfits such as fringe dresses, embellished chandelier gowns and so many more. Their fashion and glamour left everyone in awe.

Cher also known as the ‘Goddess of Pop’ went from being stage shy to billboard hot 100 chart No. 1 singer, became a fashion icon and people started to dress like her. She flaunted all the trends in the 60s such paisley prints, sparkly metallics and many more.

The 60s were so diverse on the runway too, with so many trends. Throughout the years the fashion industry has always found ways to include trends from the 60s.

Pierre Cardin, Paco Robanne and Emilio Pucci were among the first designers to notice the trends and to add them in their collections. Emilio Pucci was a famous designer of the 60s. So he even had the chance to design the Apollo 15 emblem for NASA. The mini skirt is a timeless clothing item that never runs out of fashion.

So do you have any favorite 60s fashion trend? Which trend would you like seeing making a comeback in the coming times? Do let us know by commenting below or tweeting @shilpa1ahuja.

Also check out:
– 90s Fashion: All You Need to Know About the New Retro!
– 70s Fashion Trends: The Colorful Era of True Fashion Freedom

Brinda is a Fashion Journalist Intern at ShilpaAhuja.com. She is pursuing her bachelor’s degree in Fashion Technology from NIFT. Fashion makes her happy, and she loves reading and learning more about fashion. She likes to style clothes and doing makeup is her forte. In her free time she likes to listen to music and sing. She is a huge k-pop fan, and also enjoys k-dramas. In her free time, she stays at home and likes to spend time with herself and her family. Her hobbies are drawing and learning Korean. She likes to exercise and stay healthy.